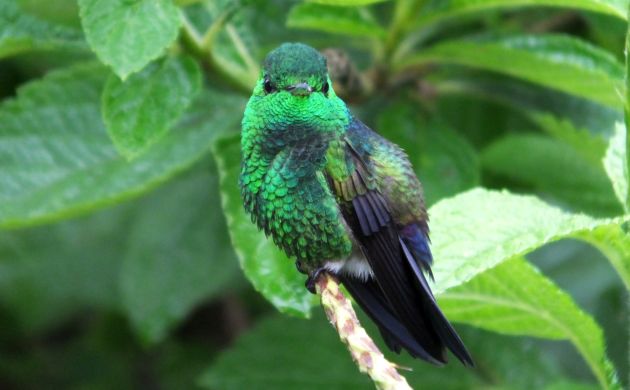 These are the summer months of the northern hemisphere and yet this time of year in Costa Rica is known as the “invierno”, Spanish for “winter”. However, no matter how adapted I become to the local culture, I just can’t use that word in Costa Rica. No, because the real thing is the brittle cold days and frozen nights of my Niagara youth, a place where I delivered pre-dawn newspapers on empty icy streets, where the sharp stars pierced the night sky so quiet and bereft of life I swear you could hear the ice sing. 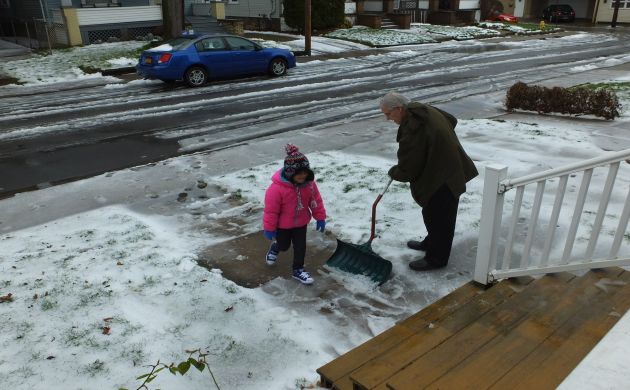 A bit of a mild Niagara winter.

It’s just too much of an amazingly far cry from my present “winter”, one where my thickest jacket is a long sleeve shirt, where the dark of the night is filled with the constant hum of biomass, and where we can always see birds. Plenty of them. However, for many local people, it is indeed winter because the heavy cloud cover and ample rains lower the temperatures a few degrees compared to other times of the year. When speaking with local people, I am reminded of how we become adapted to where we grow up. Whereas the imprinted memories of shoveling acres of snow and playing on the ice keep me warm in many a cold condition, I know someone else who would love an electric blanket on a cool fall night. It’s not her fault. She grew up in the constant warmth of tropical lowlands where trogons, motmots, and parrots were birds of an average day. And that’s also winter birding in Costa Rica, tropical birds, everywhere, all the time. 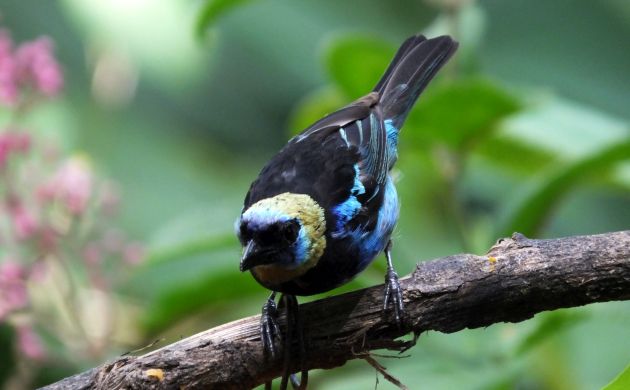 Sound nice? It is!! There are benefits to birding in Costa Rica during the winter wet season, recently, I got the chance to experience some of them during a day of guiding at Carara National Park. Some of the advantages:

Not as hot– Slightly cooler weather is always a bonus for those of us who grew up in conditions where down jackets were necessary for survival, where schools only closed when the cars were entombed in the cold, wet stuff. Visit Carara during the usual birding month of March and it’s a living oven. Bird there now and it’s fine! The other day, I barely broke a sweat. And still saw somewhere around a hundred bird species. 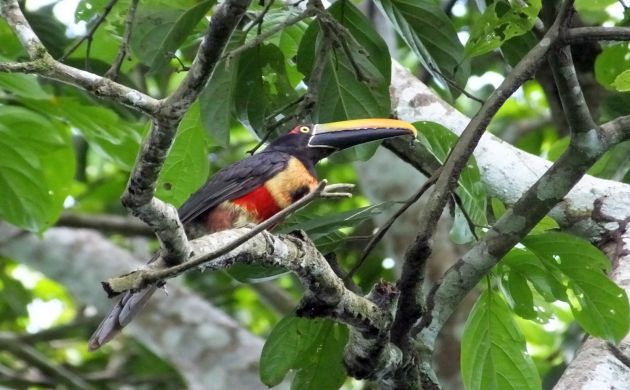 Singing birds– On this point, I admit that bird song is an essential piece of Carara whether rain or shine but during these months of cloudy weather, they do seem to sing more often. There are the cheerful, loud songs of Rufous-breasted Wrens, the ringing notes of Black-faced Antthrush emanating from the forest floor, the whistled songs of woodcreepers, Green Shrike-Vireo, and so many other feathered residents of the lowland rainforest.

That extra bit of song always helps when birding in tropical rainforest (or any habitat really). The other day, I was particularly impressed by the songs of Black-bellied Wrens, babbleresque skulkers of dense undergrowth. Several were singing in Carara and we even saw a couple very well (this is actually a fair birding achievemente). 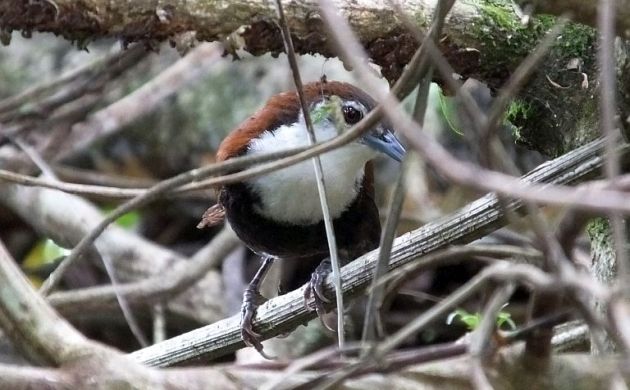 Lots of birds– Although you won’t see any Chestnut-sided Warblers masquerading as gnatcatchers (believe me, this charade is true), you will find Royal Flycatchers, antshrikes, White-shouldered and Bay-headed Tanagers, and dozens of other species. In addition to species often seen in the park, a bit patience also gave is more challenging birds like Ruddy Quail-Dove, Streak-chested Antpitta, and the rare Central American form of Long-tailed Woodcreeper.  They don’t just live there during the high season. 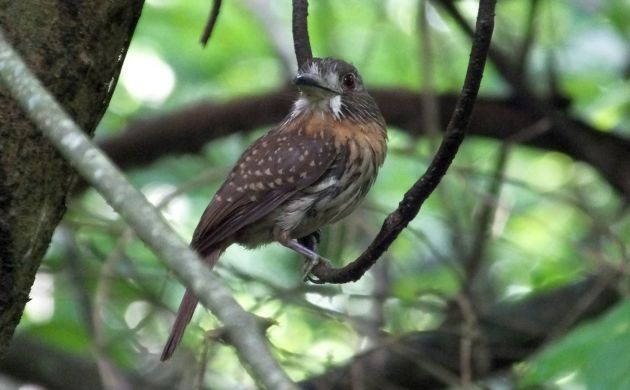 Carara is always good for the puppet-like White-whiskered Puffbird.

No Migrants– Plus, as always during this time of breeding, birders from straight up north will know that nearly every bird is one that doesn’t live near the local patch. Although it can be fun to see what wintering species like the Golden-winged Warbler are up to, we also know that what we really are bino filling views of Bicolored Antbird, Scarlet Macaws in flight, and however many other sweet lifers we can manage. 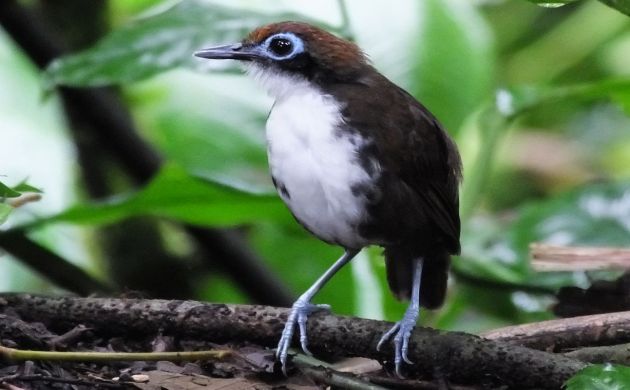 The parking lot– It’s easier to birds at the edge of the forest and the parking lot at the national park HQ is no exception. Don’t just walk straight into the forest. Check around the parking lot first because dozens of species can show! Fruiting trees can attract everything from trogons to manakins and tanagers, flowering bushes bring in the hummingbirds, and even King Vulture can soar overhead. 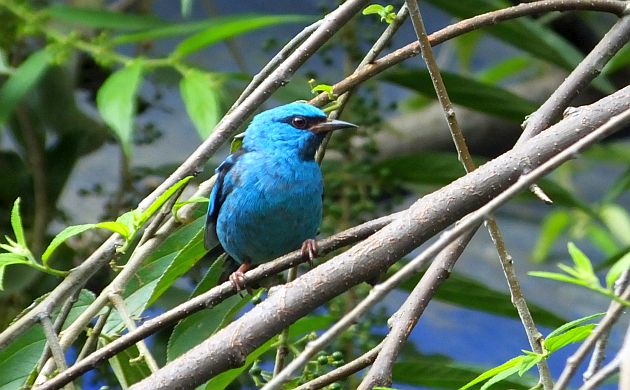 The other day, a male Blue Dacnis was showing its pseudo-cotinga colors in the Carara parking lot along with Golden-hooded Tanager and several other species. 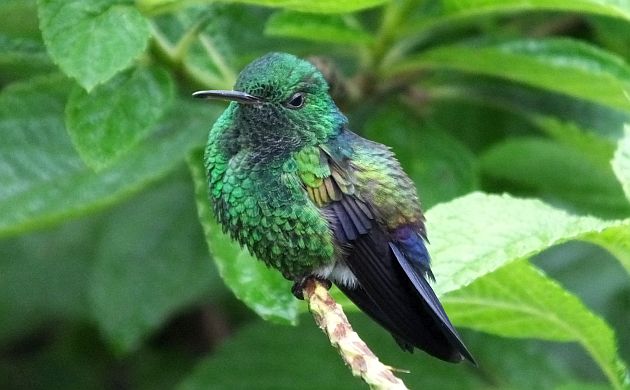 This sweet Steely-vented Hummingbird was one of those other key species.

A visit to birdy Carara National Park is worth it any time of the year, and maybe even more so during the local “winter”. If you see a good deal to bird in Costa Rica in July, get it and come to Carara for some of the best “winter” birding you will ever have. 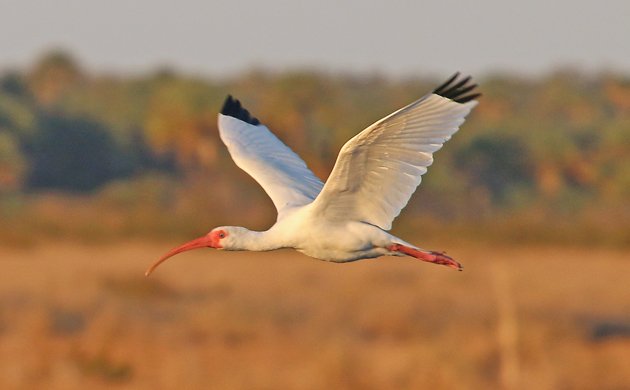 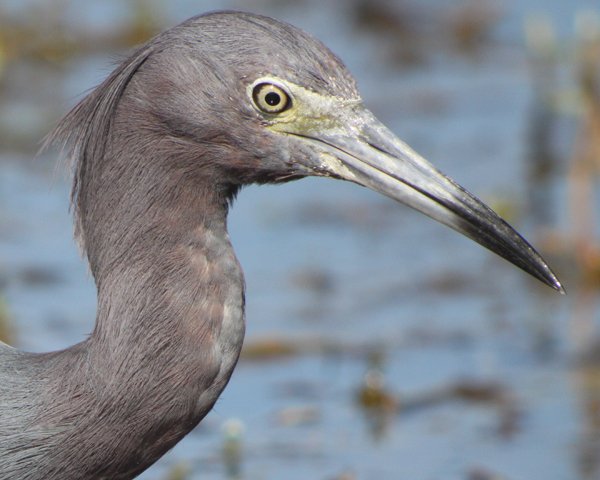