My friend Savanna and I rose at dawn, gulped down coffee and then hit the best birding hotspots on Cedar Key, wracking up hundreds of summer species before lunchtime.

Savanna and I were excited about a full-on birding day in Cedar Key, FL, but we had a few factors working against hundreds of birds appearing on our end-of-day checklists. One, we were quite simply tired, and it was past 9 a.m. when we got our gear and snacks into the car. Two, it was the end of June, and hot. Many species had left for breeding in more northerly climates, and those that remained hid out in cool spots until saner temperatures reigned in the morning and evening. We hoped for 50 species. 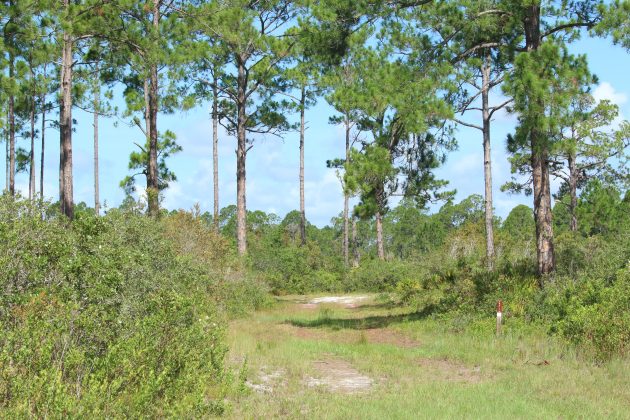 Savanna’s superior knowledge of the surrounding area was in our favor. Our first stop was at Cedar Key  Scrub State Reserve, though we took a path that was more bordered by tall pines than by scrub. The trail was wide and alternatively grassy and sandy, and Common Yellowthroats and Eastern Towhees hid in the dense bushes on either side. We picked up a few more songbirds in the pine needle canopy, including Carolina Chickadees, Blue Jays, and Tufted Titmice, among others. Common? Yes, but we were playing the numbers game.

Though I had driven past the Lower Suwanee River National Wildlife Refuge a half dozen times in my trips about Florida, I had not yet stopped, and I hummed with excitement as we drove down one of the forested refuge roads. We began in pine savanna, then walked into thick deciduous woods. Despite our clothing precautions – we wore long-sleeve fishing shirts over shorts, as well as hats and sunglasses – the heat still became oppressive. More chickadees flitted above our heads, but also a brilliantly crimson Summer Tanager, and an equally colorful Northern Parula. My favorite? We walked through a flock of Blue-gray Gnatcatchers, seemingly unbothered by the humidity. 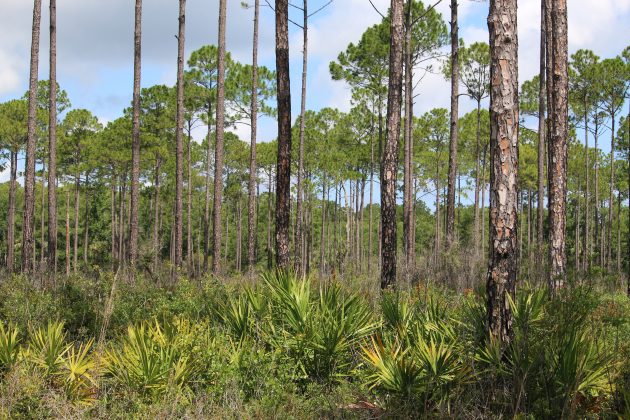 Our energy climbed with our species count. We had hit state and nationally protected areas, and now were ready for Cedar Key city gems. My hats off to the community, they had some awesome little parks! Through an ongoing effort on the part of local citizens and grant organizations, Cemetery Point Park sits at the edge of the shallows of the Gulf of Mexico. A long, wooden boardwalk rises across mangrove and marsh, providing a unique vantage point to see shorebirds, wading birds, and more. I had the most amazing view of a Clapper Rail I have ever experienced, the bird remaining in the open long enough for us to take photos of its bright, beautiful red eyes.

A pier here, a sand beach there, and we were super close to our goal as mid-afternoon rolled around. What could take us over the edge? A boat ride of course.

We hopped in Savanna’s boat at the ramp, motoring out to the salt marsh edge of Waccasassa Bay Preserve State Park. Okay, we weren’t totally focused on birding, as we were fishing with our respective significant others. But while we were casting our lines we gazed onto an unperturbed Double-crested Cormorant perched in a small tree, spotted a Least Tern flying by, and managed to identify a Ruddy Turnstone as it jet past in the wind. Nice, nice, and nice. A pair of American Oystercatchers brought our total to 47, a circling Red-tailed Hawk to 48. Oh so close. 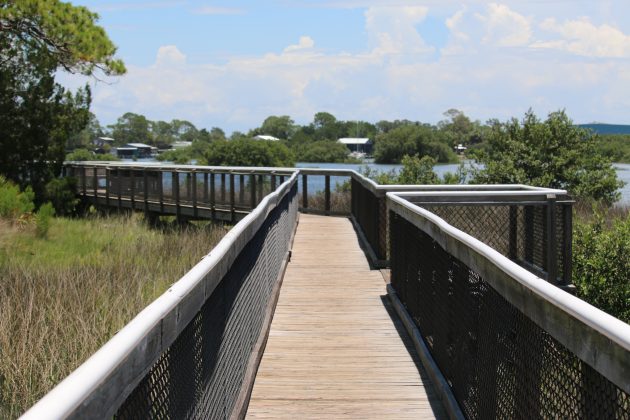 We were hot, sweaty, but most of all hungry, so we made a quick pit-stop at Savanna’s house to change and shower before dinner on the water. Watching the sunset, we counted Roseate Spoonbills from a bridge, Purple Martins by the boat launch, and our final bird species: Black Skimmers. We had officially seen 51 species that day!

I know that big days truly can count in the hundreds, especially in tropical locations or with better climate conditions. But the point of a big day, in the end, is to set a goal and stick to it. While we looked for birds we discovered butterflies and wildflowers, and Savanna taught me the names of a few more tree varieties I’ll remember in the future. We both added avian species to our year lists, and honestly just had a great time exploring coastal Florida. Meeting our 50 species goal was just a bonus!