“I think I just heard a chickadee.”

“Titmouse! I got a titmouse!”

*Much jubilation and celebration.*

And so ended the birding day of the W. T. Hornadays, the Big Day team of Mary Normandia, Seth Ausubel, Stephane Perrault, and me. Our attempt at winning the Seatuck Birding Challenge started at just after 5AM in the Greentree Preserve in northern Nassau County, took us to Fort Tilden in coastal Queens, to the mud and muck of the East Pond at Jamaica Bay Wildlife Refuge, through the tangled undergrowth of Alley Pond Park, and through a variety of habitat in coastal Nassau and Suffolk Counties. We consumed apple-donut cake, beef jerky, chocolate-covered almonds, and a variety of other unhealthy snacks. We survived mosquitoes, poison ivy, arguments about the route, traffic, and everything else that was thrown at us and we managed to break the record for the Seatuck Birding Challenge, which had stood at 117. Sadly, four other teams did as well, and we finished fourth with our 123 species. But now that I have started this story at its end let me go back to the beginning and tell the tale chronologically.

Before dawn we were walking through the dark forest at the Greentree Preserve hoping for a Great Horned Owl or an Eastern Screech-Owl. Neither would cooperate. When we emerged from the forest and were about to get back in the car I suggested we look over the field nearby for Common Nighthawks. Success! Three nighthawks were foraging in the moonlit sky, which you can appreciate thanks to the image at the top of this post. On the way out Stephane spotted the silhouette of a large bird perched on a bare stub. Yes! Our Great Horned Owl! Sadly, closer examination revealed that it was an Osprey. Oh well…on to Fort Tilden! 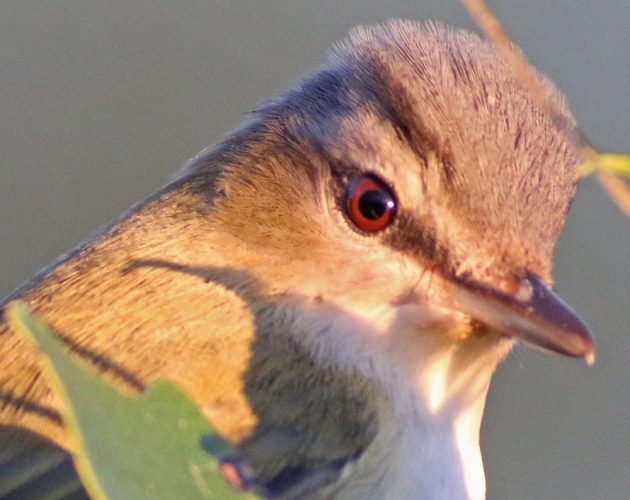 Fort Tilden was very birdy, which was expected considering the northwest winds that had blown overnight and were still blowing as we walked the edges. Because we were in the middle of a competition I didn’t have time to take many pictures but the Red-eyed Vireo above landed so close that I couldn’t resist. We added several wood-warblers, flyover Bobolinks, and a Merlin quickly, and kept building our list. Then Mary said “I have a chat,” and pandemonium ensued as we all tried to get looks at the bird, an excellent find any time of year in Queens.

The Yellow-breasted Chat cooperated enough to let us all see it and we continued along, adding more and more birds. Blackpoll Warbler. Least Flycatcher. Bald Eagle. Northern Flicker. Magnolia Warbler. Every bird counted as one so common and uncommon species were all appreciated. We came across another team in the competition and the usual poker faces came out. Once they went past we heard a singing White-eyed Vireo, a bird they must have heard as well. Then I found a second chat! Had they seen it? (We later found out that they had not but they had found one at Jamaica Bay later in the day.)

By the time we left Fort Tilden it was not yet 9AM and we already had almost seventy species checked off the list. We headed for Jamaica Bay, spotting Boat-tailed Grackles along the way, and did a brief walk in the south gardens hoping for more migrating passerines (but not finding any that we needed) before we headed onto the East Pond for shorebirds and whatever else we could find. A young Bald Eagle, our second of the day, preceded us onto the pond but the first good birds we spotted on the actual pond were a quartet of Northern Pintails that conveniently flew right past us. 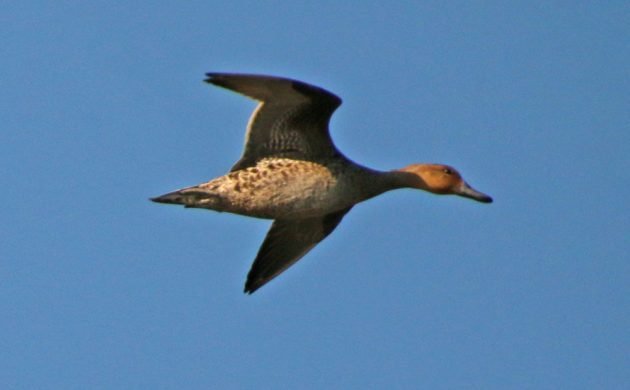 one of the four pintails

We had a single Stilt Sandpiper, lots of Semipalmated and Least Sandpipers, a bunch of White-rumped Sandpipers, the usual herons and egrets, and several species of puddle duck. Then, in quick succession, a trio of Pectoral Sandpipers flew in and landed in front of us, Mary spotted a Little Blue Heron, and Seth found the American Avocet way up in the north end, probably a half-mile away. While trying to get the avocet in my scope I settled on a distant white bird that didn’t look right and it eventually turned its head to reveal a brick-red bill on a head with a dark cap. Caspian Tern! The birds were piling up! Then the avocet decided to make things easy for the team coming up behind us and flew down the length of the pond to land directly in front of us at the raunt. 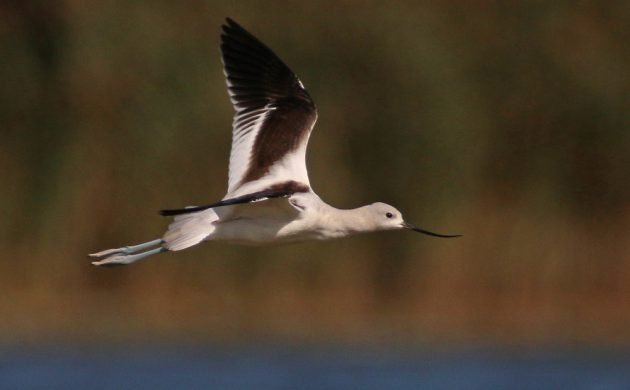 This is more like the look you want when seeing an avocet. 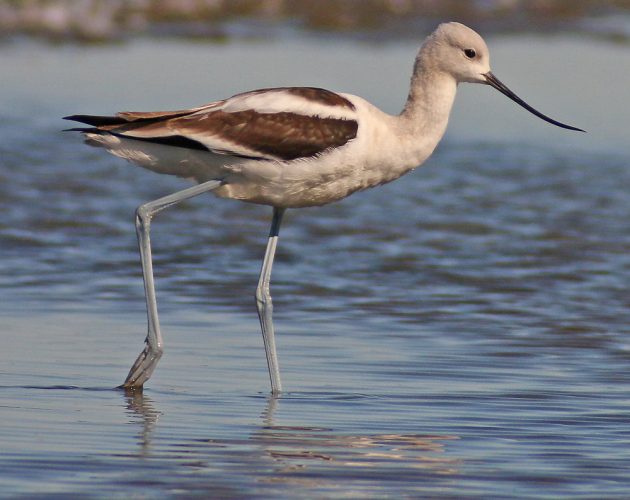 It foraged in front of us until we left, completely unconcerned about our presence.

Of course, this being a big day, it was the one time that a Peregrine Falcon did not strafe the pond so we left with a nice haul of birds but missing the fastest bird in the world.

But we couldn’t worry about that! On to Alley Pond Park to search through the aralia for wood-warblers and vireos attracted to the berries. As soon as we got out of the car Stephane picked up on two Turkey Vultures flying overhead, our only ones of the day. A nice omen, we thought. We gradually added to our species list with a Chipping Sparrow here and a Hairy Woodpecker there. Scarlet Tanager and Bay-breasted Warbler were two nice finds and we left Alley Pond Park north of 100 species but still missing some basic birds like Tufted Titmouse, Red-tailed Hawk, Belted Kingfisher, and Green Heron.

As we headed east into Nassau and Suffolk Counties a dispute about our planned afternoon itinerary developed and we ended up doing quick stops at quite a few locations, picking up birds here and there but never getting the numbers of species we thought we needed. Cow Meadow Park gave us Spotted Sandpiper and Glossy Ibis, Cammann’s Pond Park gave us Yellow-crowned Night-Heron, Jones Beach netted us Least Tern, Red Knot, Peregrine Falcon, and Ruddy Turnstone. More stops on the south shore and sightings while driving got us Northern Harrier, American Kestrel, and Greater Yellowlegs. At one point Stephane spotted our third Bald Eagle of the day, absurd considering we still didn’t have a Red-tailed Hawk!

We needed more land birds than birds we could find by the coast and figured that Connetquot State Park was the best place within range as we were down to less than an hour until the competition ended at 5PM. We pulled up at Connetquot at just after four, with visions of finally getting Pied-billed Grebe, Belted Kingfisher, Tufted Titmouse, Red-tailed Hawk, and Green Heron. And, wait, we somehow still don’t have a single accipiter? We were therefore shocked to learn that the park closes at 4PM and the very mean lady at the booth was not going to let us in. We managed to sweet talk her and got a gift of ten minutes which we put to good use as Stephane heard a Pine Warbler and then spotted a Red-tailed Hawk. Finally! The most common of raptors in New York took us all day to find. We hustled back to the car to try to get one more stop in and also to avoid the wrath of the meanest park attendant in New York State. At Hecksher Park we were having no luck at all until Mary said, “I think I just heard a chickadee.”

And, well, you know what happened after that. We were pleased, though, that the titmouse was species number 124 and that we had a great day and, wait, look at that, another Common Nighthawk feeding with Tree Swallows! That’s a cool bird to both start and end the day with.

The dinner was well-attended and well-catered, with delicious tacos and burritos to say nothing of some great beer. Tired and happy with our fourth place finish, we made our way west back to Queens, plotting for next year’s competition. All Wings Considered better watch their backs because we are totally coming for them next year! (Even if they did beat us by 15 species on Sunday…)

« Previous post
Endangered Birds: 50th Anniversary for the Class of 1967
Next post »
Best Bird of the Weekend (Second of September 2017)