I just returned from a glorious birding trip all over Cuba, so I am just going to ignore the pile of spring bird books on my dining room table (most of which arrived while I was gone), and write a bit about my favorite Cuban birds.

Of course, it’s the colorful and tiny birds that get the most attention when one thinks of Cuba. There’s the Cuban Trogon, majestic (the national bird of Cuba), brilliantly colored, and surprisingly common. Wherever we went, it seemed, especially in shady areas full of trees, we would hear the low, guttural to-roro to-roro toc-toc.* Despairing of finding a trogon that wasn’t in shadow or blocked by numerous branches, I was deliriously happy when the above bird, seen in La Belén Reserve, decided to fly up into the sun for a few minutes. 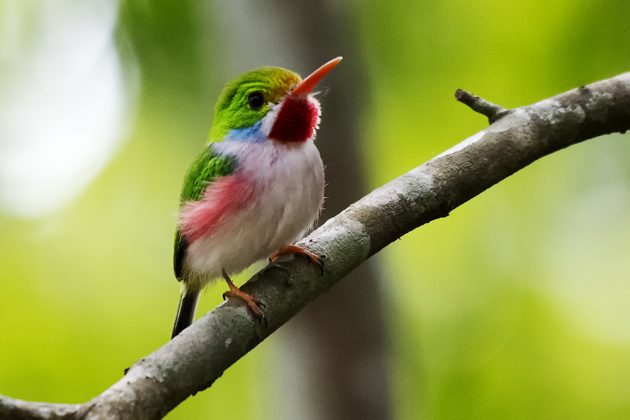 And then there’s the Cuban Tody, gaudy in lime green, white, and red, with touches of pink and yellow and blue, tiny enough to be mistaken for a stuffed toy except for its propensity to fly up as soon as I press the focus button. Like flycatchers, the bird continuously forages for insects. And, like the Cuban Trogon, it can be found throughout the island, especially if you are adept at detecting green and white birds amidst green-leaved trees shot through with sunlight. 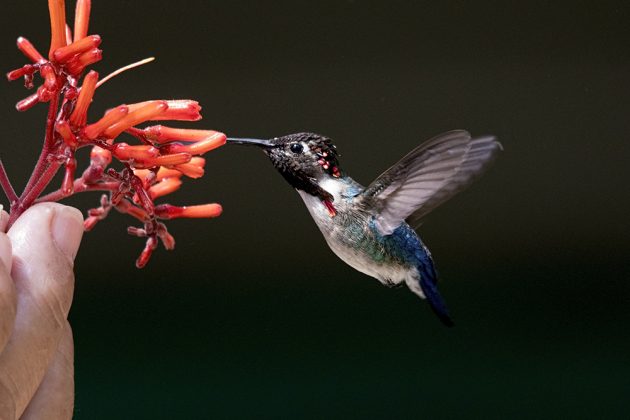 Most of my non-birding friends–well, the birding ones too–are asking me if I saw the Bee Hummingbird, the smallest bird in the world at less than 2.5-inches in length and less than an ounce in mass.  Rarer than Cuba’s other hummingbird, the Cuban Emerald, the Bee Hummingbird is found in fragmented areas on the island. We observed the bird on the Zapata Peninsula, first feeding on a flowering tree off of a road where we also observed Fernandina’s Flicker and Red-shouldered Blackbirds, and later in the garden of a lovely lady who has turned her backyard into a paradise of feeders and bird-friendly plants. We saw Cuban Orioles at the hummingbird feeders, Cuban Emeralds on the wires, and migrating warblers in the trees and on the ground. Bee Hummingbirds were diving here and there and everywhere in a large flowering bush or practically feeding out of our host’s hand. It was mid-afternoon, and the male hummer’s head feathers looked alternately dark or metallic red, depending on the bird’s position and the light. To everyone’s delight, males were engaging in mating displays, shooting up to dizzying heights, iridescent specks in the air. 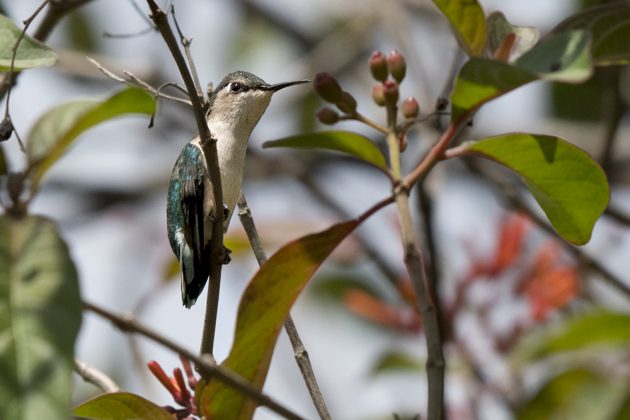 The female Bee Hummingbird watched. A little plainer, but in the sun her iridescent blue feathers gleamed. 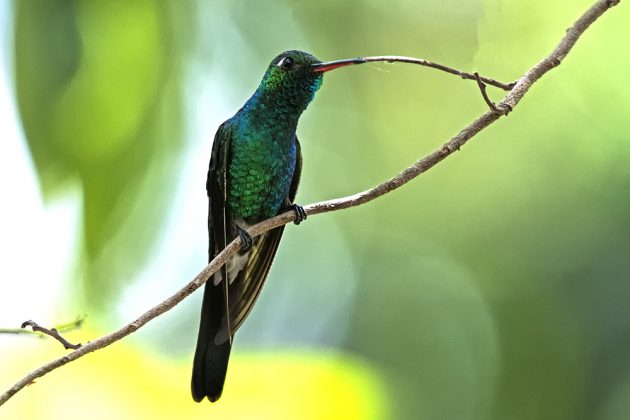 Cuban Emeralds, a near-endemic found in Cuba and the Bahamas, perched at a distance from the Bee Hummingbirds. I don’t know if they were intimidated by the tiny hummers, which are known for their aggressive territoriality, or if they just preferred to rest at that time of day. Unlike the Bee Hummingbird, we saw the Emeralds everywhere we went, even in Havana. 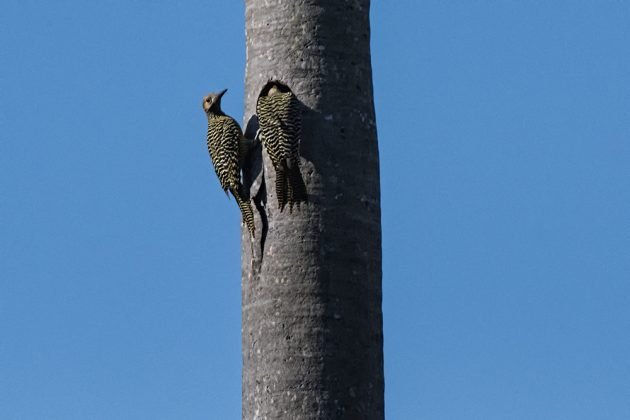 I was thrilled to also spend time with several Fernandina’s Flickers earlier in the day. This large woodpecker is one of Cuba’s rarest birds, with a small population of 600-800 individuals, who are mostly seen on the Zapata Peninsula.** They nest in palms, and we found a small area where we observed several couples investigating and preparing nest holes. One male flicker in particular was very busy clearing out a nest hole. He would stick his head out every minute or two and disperse sawdust, quickly disappearing back into the hole for more house cleaning. I took a brief, wobbly, video of the process.

The Zapata Swamp, Ciénaga de Zapata, is of course known for the three birds that bear it’s name: the Zapata Rail, the Zapata Wren, and the Zapata Sparrow. The Zapata Rail is a mystery wrapped in an enigma. There are few specimens, no photographs of a live bird, and we’re not sure if we know what it sounds like. There is one historical record in eBird, representing a specimen collected by Fermin Z. Cervera on April 30th, 1927, and a recent sighting (no photographs or video) in November 2014 by ornithologist Andy Mitchell and naturalist Angel Martinez. Even Orlando Garrido, the co-author of Field Guide to the Birds of Cuba who we had the privilege of visiting, says he has not seen the bird. 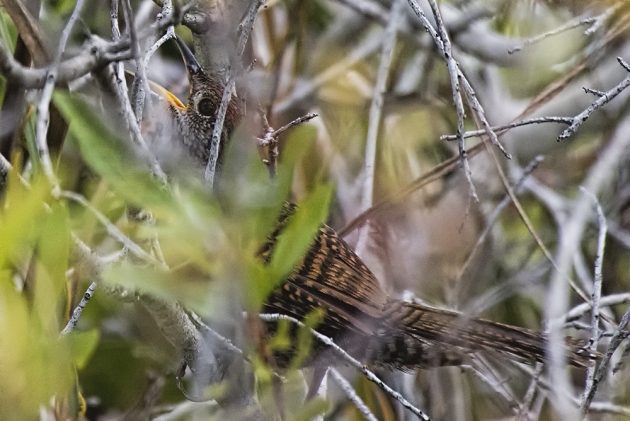 We did see the Zapata Wren, but it took a lot of work. Our group travels into the wetlands of the San Tomás reserve by boat (small, wooden boats masterfully steered by local workers) to a small platform on the edge of the channel where we make a semicircle and wait. A Gundlach’s Hawk flies overhead! But, no wren. We move to a spot deep in the saw grass. We wait, we listen. I mistakenly wore sneakers (why? I don’t know), and they sink into the soft mud. We then boat further down the channel to another spot where we walk into the grass and a tape is played and we wait. The wren comes in! The bird flies around our group, alights onto a bush and, just as I raise my camera, dives into the bush. Then up and around us to the other side. Then back again. We become dizzy, trying to keep track. So, here is my view of the Zapata Wren, exactly as our tour leader, Jon Dunn, predicted we’d see it–in parts that come together to make the whole bird.

We also got nice views of the Zapata Sparrow, one of three subspecies in Cuba, but I am going to leave that for another time.

I’ve wanted to visit Cuba for a long time and was thrilled to finally be there on the first Wings birding tour, led by Jon Dunn (known to many birders as the co-author of the National Geographic Field Guide to the Birds of North America) and Dr. Luis Manuel Díaz Beltrán of the Cuban National Museum of Natural History, and organized by Gary Markowski of the Caribbean Conservation Trust (CCT). One of the highlights of the trip was the opportunity to meet Nils Navarro, whose Endemic Birds of Cuba field guide I reviewed back in November 2015. Nils had read my review! He thanked me for writing about his book and said he was going to keep my constructive comments (mostly about the index, since the book is excellent) in mind for his next book. A book reviewer’s dream!

I’m just beginning to go through my photos of Cuba’s birds and to “process” my impressions of the country itself. I will be sharing more in future posts, if I can tear myself away from that pile of big, fat, fascinating spring birding books.