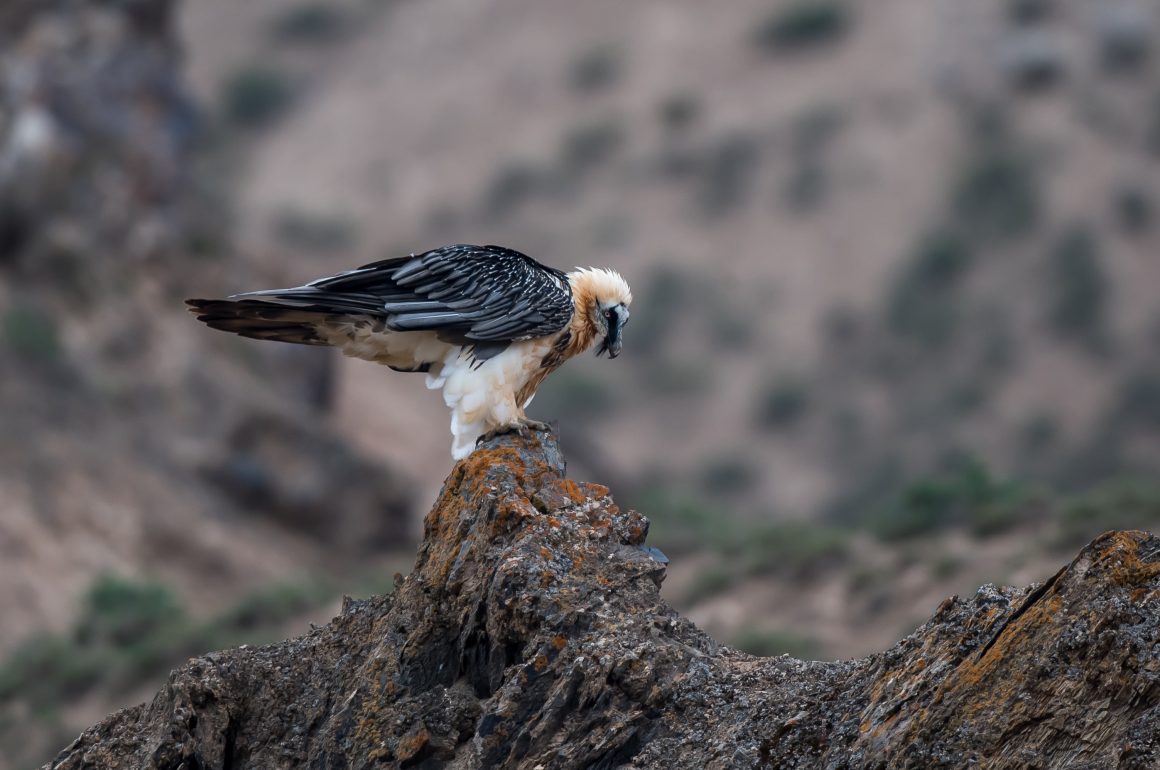 Dulan County is a large county in east-central Qinghai, China. Sparsely populated and at an average altitude of 3200 meters, it has a bit of an end-of-the-world feel to it, particularly the ranger station at around 4000 meters, where we stayed for a few nights. Good for animals, of course – particularly some shy mammals. Therefore, apologies in advance for the largish number of mammal photos in this post.

The Bearded Vulture looks surprisingly like the Night King in “Game of Thrones”. Probably not a coincidence.

Being a mammal myself, I am understandably much less fond of this animal class than I am of birds. But I have to admit that seeing some of the wolves, foxes, asses, and sheep of Dulan county is nice, at least as long as they do not stand in front of some exciting birds.

Blue Sheep. At least they are cute.

Given that it is hard to mention one of my favorite bands, the Mountain Goats, in a birding blog, these photos of blue sheep are probably the best opportunity I will ever get. Listen/watch their “This year” here.

Tibetan Fox. Kind of cute, too.

Grey Wolf. Not cute, I guess.

Two Himalayan Marmots, one of which small, presumably wet and rather cute. No nice blue flowers.

Gazelle, maybe Goitered? Not in a zoo but in the wild, despite the fence in the background.

It feels a bit sad to admit that this photo sequence of a Little Owl makes me think of the Rocky Horror Picture Show (It’s just a jump to the left … and then a step to the right). I do not even like that movie much.

One of my Chinese friends who is a much better birder than me told me that this Chinese Grey Shrike is likely to be of the subspecies Lanius sphenocercus giganteus. According to the HBW, based on strong morphological, ecological, and genetic differences, this is likely to be a distinct species altogether. If I was a lister, this would give me great hope for a future armchair tick.

A Common Kestrel looking rather grumpy, probably because it was snowing in August on that day.

When shrikes get fat and overdo their eye makeup, the result is a Desert Wheatear.

According to our guide Bella from Alpinebirding, the holes in these walls are nesting holes of Ground Tits. But maybe she just made this up in an effort to further increase client satisfaction.

This Robin Accentor was constantly asking his chick to follow him. The chick – quite possibly the cutest bird I saw on this trip – obliged.

I wanted to take a photo of Pine Bunting with a more natural background, but the bird insisted on sitting on a wire. I guess modern birds think this looks much cooler.

We encountered several small herds of Przevalski’s Partridge. I always feel a bit sad for bird species that probably cannot even pronounce their own names.

If I tell you that the Streaked Rosefinch was named after Robert Streaked (1796-1856), a Scottish naturalist, will you believe me?

The Twite is not a particularly exciting-looking bird – the only extravagant bit is this little pinkish bit on the rump. Like the colorful handkerchief looking out of the breast pocket of a well-dressed yet ultimately rather conservative gentleman.

There are also White-browed Tit-warblers here. Always nice to see them again.

The Upland Buzzard is the most common raptor here at Dulan county.

This one has Pika for lunch …

… but does not seem very convinced by its taste.

Juvenile Upland Buzzards have an instinctive ability to look stupid

This is a truly miserable-looking Upland Buzzard. If you want to learn more about being miserable and do not know Misery Bear, please watch this video.

Shared misery is still misery, or not?

Unscrupulous bird guides (not from Alpinebirding – note that each of these little advertising plugs will presumably entitle me to a free beer on a future birding trip with them) sometimes tell innocent birders that this White-rumped Snowfinch is actually a juvenile Snowy Owl. Not so.

Where Are You Birding This First Weekend of June 2011?