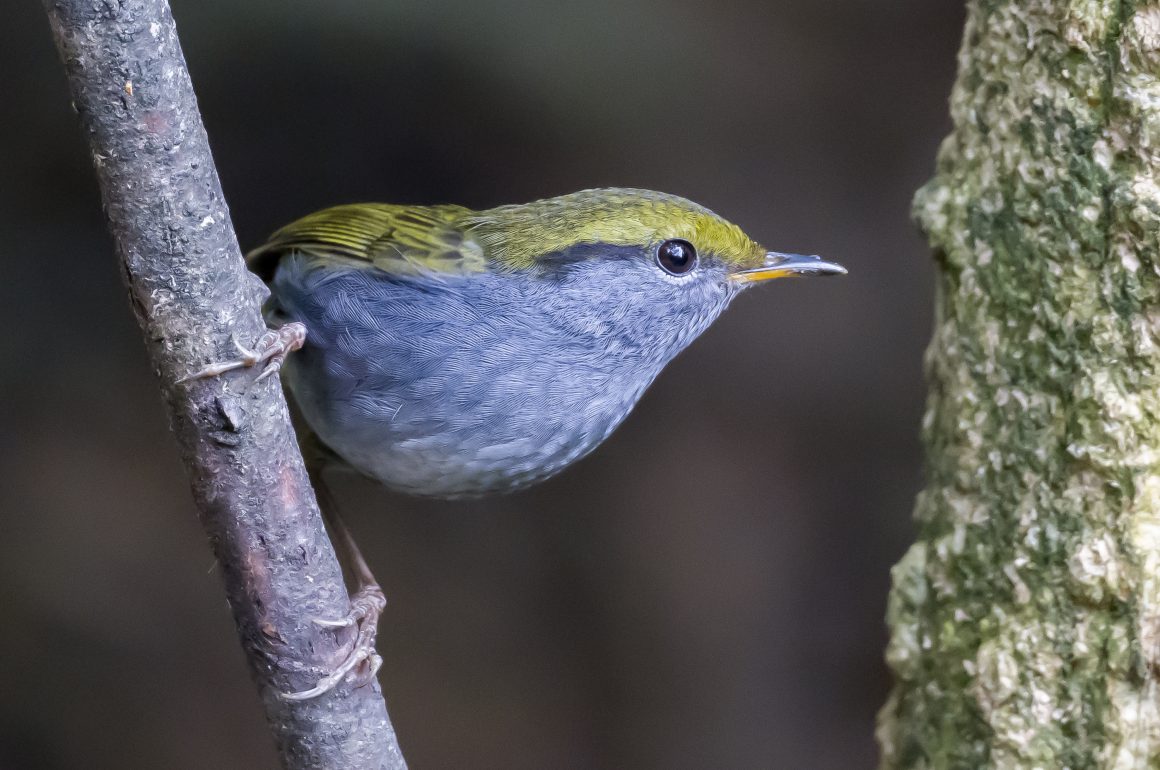 Napo is a county in the West of Guangxi, bordering both Yunnan and Vietnam. It is about 3 hours by car from Nanning airport, which in turn can be reached from Shanghai in a 2.5-hour flight.

While Napos relative remoteness made it seem less vulnerable to covid, on the second day of our hotel stay we were informed that they could no longer service the hotel rooms as all the hotel service staff had contracted the virus. Which made the rest of the trip a bit of a waiting period for contracting covid …

Apparently, the Large Niltava is Asia’s largest flycatcher. That comes at a price – the HBW describes the species as “stocky and fairly sluggish” and – with a critical undertone – continues to state that the species is “generally less agile in flight than are most flycatchers”. I would like to see the speed at which some of the HBW editors catch flies …

The male is quite “in your face” while the female is a bit more subdued. Quite elegant, in fact.

If you aim to achieve some kind of immortality, you might do worse than follow the example of Oana Mirela Chachula, a biologist at the National Museum of Romanian History, Romania. Apparently, she supported the research of a Romanian team on ectoparasites of birds from Meghalaya (India) – and for her troubles, the team thanked her by naming a species of feather mite newly discovered on Large Niltava after her.

(Side note: Should anyone involved in discovering new species enjoy reading this blog, please refrain from naming any newly discovered species after me – particularly if these species are of the itchy or vaguely disgusting kind. End of side note).

I only saw the female taking a bath – coincidence?

Even in China’s slightly more remote provinces, one is never far away from species with treacherously pornographic names such as Japanese Tit. Why are people always thinking about sex?

The Grey-bellied Tesia is described by eBird by the seemingly Tolkien-inspired description “Long-legged and short-tailed, this tiny bird moves rapidly and unseen through dark, dense undergrowth like a pint-sized shadow”. The text just about manages not to use the word “elf”.

Fortunately, it is actually not quite as difficult to photograph as the appallingly bad photo of the eBird report suggests, though it indeed moves quickly.

Why the Latin species name is cyaniventer (meaning having a dark blue belly) remains a mystery to me though.

The Bar-backed Partridge was also one of four focal species in an investigation into illegal bird hunting in Southwestern China. Sadly, that study found that perceived entertainment and recreational value are main motivators for illegal hunting rather than economic considerations: “Contrary to previous findings highlighting subsistence and finance as major factors driving hunting, the most important predictors of hunting activity in this landscape were related to attitudes regarding the enjoyment of hunting”.

Unfortunately, this makes it much less likely this hunting will stop once people get richer. Then again, I guess this conclusion could easily have been drawn from the popularity of hunting in the US …

The Sooty-headed Bulbul was the subject of a similar study – the authors checked whether the flight initiation distance of the bird is related to hunting pressure in a given area. Unsurprisingly, it is. If I can give you some advice: Better not be a bird in China.

The usually fairly friendly eBird reviewers give a rather harsh assessment of the Scarlet-faced Liocichla as a “Garish medium-sized laughingthrush-like bird”. It is hard to blame them given the color combination sported by the species, though it makes me wonder why the Silver-eared Mesia with a similarly broad array of colors is described as a “beautiful small babbler”.

The mystery deepens when reading the species description in the HBW: “Fairly small babbler, mostly plain brown but with ­scarlet face and scarlet in wings and tail”. That does not really sound garish, right? On the other hand, to me, a length of 21-23 cm does not sound like a “fairly small babbler” given that babblers are “small to medium birds” (Wikipedia). Confusing.

Strangely, eBird gives the Red-tailed Laughingthrush a much better review as an “exquisitely- and distinctively-colored laughingthrush”.

The species gets its Latin name milnei from Alphonse Milne-Edwards (1835-1900), a French mammalogist, ornithologist, and carcinologist (it seems multitasking was easier then). From the fact that I do not have anything exciting to write about him, you can deduce that I did not make him up (my imaginary ornithologists tend to be a bit more interesting, having at least committed some atrocities or fathered a number of illegitimate children). The only vaguely specific thing I can say about him from his photo in his Wikipedia entry is that he had already lost a substantial part of his hair at age 48. Maybe doing ornithological research was just his way of compensation.

If you ever consider opening a haunted house, you might want to get some of these birds – according to the HBW, their sound includes phrases such as “uuu-weeoo”, “eeoo-wee” or shorter “uuuwi” or “uuuu-hiu-hiu” and “uuuu-hiu-hiu-hiu”.

eBird is also back to its usual positive self in describing the Black-headed Greenfinch as a “handsome yellowish finch”.

The poor Common Tailorbird is a host to the Plaintive Cuckoo. Researchers examined the interaction between the host and the cuckoo chicks and found that it is more or less the same as the one known from Common Cuckoos. That does not keep them from making the rather pompous claim that the “developmental data on Plaintive Cuckoo nestlings and their tailorbird host builds an important foundation for future work on the co-evolutionary interactions in this parasite–host system.” Almost 30 years ago, I may have made similarly grandiose claims in the introduction to my Ph.D. thesis. I was young then.

Another, somewhat more interesting study suggests that nest sanitation (ornithologists speak for cleaning up your room) helps Common Tailorbirds to recognize and eject parasitic eggs. While I do not find the rationale fully convincing, I would have to agree that it is easier to overlook something in a room full of trash. This also allows me to give you, my dear reader, some practical advice for your life from ornithological search results – keep your room clean! You may call me Marie Kondo if you want.

Strangely, there is not much research on the Blue Whistling Thrush. It tends to live near hilly streams, not surprising given that it seems to feed mainly on snails (though one paper describes it as eating a snake). The ones in China have a black bill – further west (where apparently historically there was no ban on the use of the color yellow, which in China is traditionally reserved for the emperor), the bill is yellow.

Black-throated Bushtits can also be seen in Shanghai, but they are cute and attractive birds, a fact that is even indicated at by their Latin species name of concinnus, “elegant, neat, pleasing” (HBW).

The Rufescent Prinia – if that is indeed what it is – does not seem to mind very much being confused with the Grey-breasted Prinia. At least not to the extent of wearing name tags.

The Grey Bushchat has a species name that is derived from chemistry: “ferreus”, or iron-colored (I always guessed my chemistry studies would come in handy sooner or later). As usual, this refers to the silvery-grey color of the male rather than the brown color of the female.

The last bird shown in this post is a Pallas’s Leaf Warbler – but is it really? eBird warns that it “overlaps considerably with other similar leaf warblers throughout the non-breeding range, so identification warrants caution” – which sounds like an ID challenge way above my pay grade as a birder. At least the basic description of the species in eBird seems to fit: “Tiny, chunky, sprightly warbler with a short tail and a big head”.

But then again, chunky? Really? 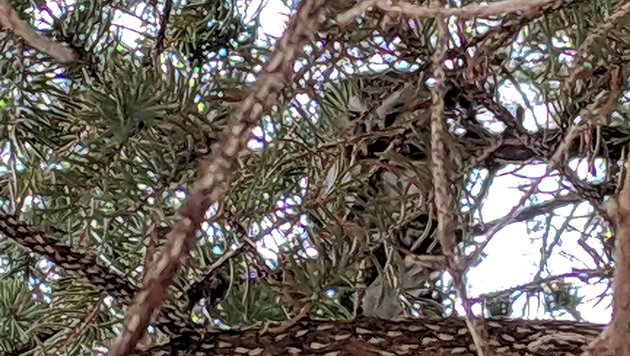 Best Bird of the Weekend (Second of March 2019) 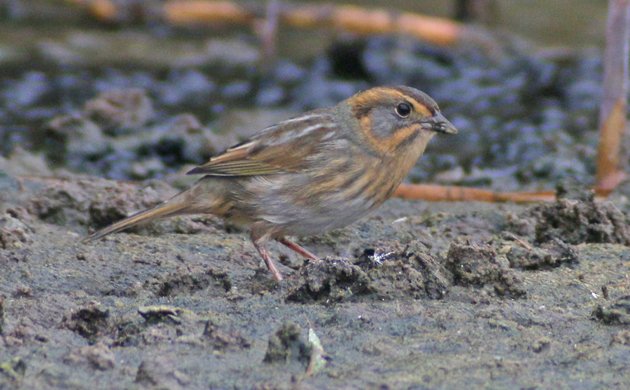