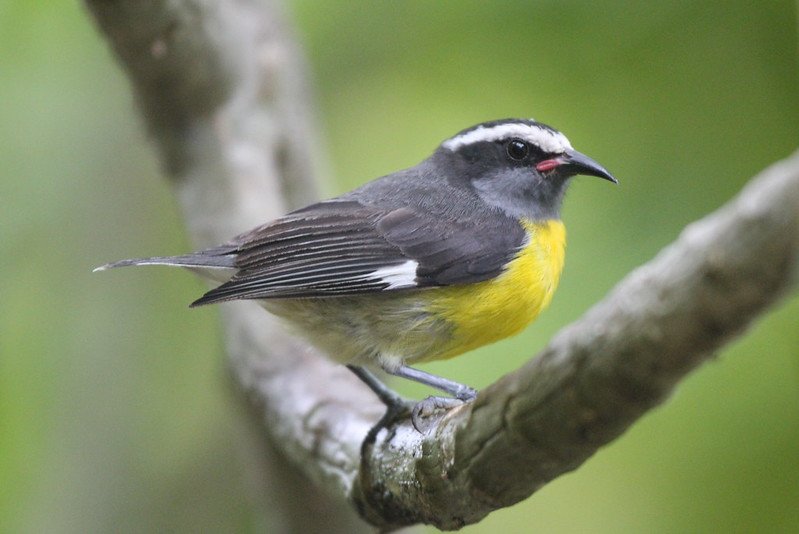 In September of 2017, Puerto Rico was hit by two powerful hurricanes: it was grazed by Irma and then clobbered by Maria, a Category 4 storm that cut a devastating swath across the island. The human and economic consequences were dramatic and persistent.

These hurricanes prompted a personal interest in the impact of hurricanes on birds, so I did some research, which ultimately led to an article in the April 2018 issue of Birding magazine.

Immediately after hurricanes, surviving birds appear to wander in an effort to find any remaining food supplies and suitable habitat. Birds that rely on a closed canopy, mature trees, or nectar, fruits, or seeds may struggle to survive. For example, hummingbirds must find patches where there are still flowers. Species with small ranges (e.g., single island endemics) or tiny populations (e.g., endangered species) are especially vulnerable.

But as the months pass, forests and other habitats regenerate and many birds return. Over the longer term, forests mature, closing hurricane-created gaps in the canopy, at least until the inevitable next hurricane. 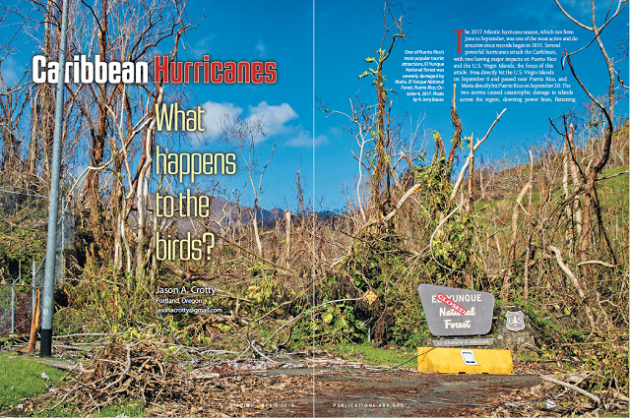 Studying the impact of hurricanes requires data from before and after the event. However, there are few long-term avian studies in the Caribbean. Much of what exists is from Puerto Rico, a U.S. territory where researchers have numerous ongoing investigations, including many studies in El Yunque National Forest.

Christmas Bird Counts administered by the National Audubon Society are one source of data. CBCs have been conducted for years in several locations in Puerto Rico, utilizing consistent procedures that can provide comparable “before” and “after” data.

The 2017 CBC was conducted just a few months after Maria and forests were still extensively defoliated, with countless felled trees and snapped branches. Some plants had started to re-sprout, but recovery was in the very early stages. Nevertheless, the 2017 CBC tallied 1,934 birds of 82 species, both of which were low counts for past CBCs (e.g., the 2016 CBC had 2,579 birds, 97 species).

When corrected for search effort in the field, participant groups found 1.8 species per party hour, a value not much lower than the mean for counts of the previous 10 years and within the range of earlier counts (1.8-2.2). However, they found only 43 individual birds per hour, well below the 10-year mean of 59.6, as well as below the 10-year range (47.7-68.2).

Some species experienced dramatic declines. For example, nectarivores (e.g., hummingbirds and Bananaquits) showed a significant drop, which was not surprising given the loss of flowers to high winds. Most shorebird species fell too. Surprisingly, however, a few actually increased, including Scaly-naped Pigeon, Red-legged Thrush, Puerto Rican Oriole, and Puerto Rican Tody. Others were essentially unchanged.

The causes of these inconsistent results are unclear. Some birds may have had to forage more actively, causing them to be observed more frequently, even if there were fewer of them. And post-hurricane habitats themselves may lead to increased detection, as there are no leaves to obscure the birds. Moreover, because many areas lacked a canopy altogether, birds that typically spend time high in trees are forced to ground level, where they are more likely to be observed. And numerous birds may cluster around remaining food sources (e.g., Royal Palms for frugivores), increasing the probability of detection.

By the 2018 CBC, although there were still obvious signs of structural damage in the forests, most foliage had returned. But there were still large gaps in tree canopies that had been closed before the hurricanes.

The 2018 CBC tallied 2,492 birds of 87 species. Both numbers were higher than 2017, but still relatively low compared to pre-hurricane counts. When corrected for search effort, participant groups found 2.0 species per party hour, within the range of earlier counts (1.8-2.2). They found 57 individual birds per hour, consistent with the 10-year mean (59.6) and within the 10-year range (47.7-68.2). There were some exceptions. For example, most nectivore numbers continued to be low.

In 2019, there was still structural damage in the forests, but most foliage had returned. Many canopy gaps continued, and saplings, vines, and ferns flourished in those openings.

Nectivores continued their slow recovery, except for the Bananaquit, which had now fully rebounded, likely due to its high reproductive rates. Hummingbird numbers were still low compared to historical numbers. Although there were variations among species, seed-eating finch counts were still low, but dove numbers were similar to baseline levels. Insectivores were on the low end of the historical ranges, omnivores were within the range, and raptors were below after returning the baseline in 2018. Waterbirds and shorebirds were generally within the historical range.

Despite the COVID-19 pandemic, the 2020 CBC was conducted (consistent with CDC safety guidelines) on December 21, 2020. A reduced number of participants tallied 2,335 birds of 93 species. Both numbers were higher than 2019, but lower than the pre-hurricane average.

When corrected for search effort, 2.3 species per party hour were detected, which was the same as 2019 and at the high end of the 10-year range. Participants found 58.7 individual birds per hour, similar to 2019, and consistent with the historical mean and within the historical range.

Overall, it appears that most species have recovered to pre-hurricane levels, with a few lingering exceptions, including hummingbirds. Most hummingbird species were still detected at reduced rates (e.g., Antillean Crested Hummingbird, Green-throated Carib, Green Mango, and Antillean Mango), though one species (Puerto Rican Emerald) has bounced back to pre-hurricane levels. This is consistent with past studies that have consistently documented post-hurricane declines in nectivores.

The remaining species at reduced levels are generally fruit and seed eaters, including Antillean Euphonia. Some insectivores remain at elevated levels, including Puerto Rican Woodpecker and Puerto Rican Tody, though a few (e.g., Gray Kingbird) have still not recovered. Ruddy Quail-Dove were observed for the first time since 2017. And the many species that had already returned to pre-hurricane levels generally continued at those levels.

Thus, the 2020 data indicate that most species have returned to pre-hurricane levels, with a few remaining exceptions. There appears to be considerable resiliency in the populations of Puerto Rican birds. The next count is scheduled for December 19, 2021.

For the second consecutive year, COVID-19 impacted the count, with fewer participants and fewer areas covered. Moreover, rain and wind on count day hindered proceedings. Nevertheless, a reduced number of participants tallied 2,013 birds of 80 species. Both numbers were lower than 2020, and lower than the pre-hurricane averages. Participants saw 1.98 species per party hour, which was within, but at the low end of, the pre-Maria range. They observed 54.3 individual birds per party hour, which was also within the ten-year range.

Most species have returned to pre-hurricane levels, though there are a few exceptions, some of which are likely explained by the reduced number of observers and coverage. That said, several hummingbird species and egrets and herons continue to be seen at lower levels. Although the pandemic and weather complications make comparisons difficult, it appears that the bird community within the count area has proven highly resilient to the 2017 hurricanes. Indeed, a new species (Limpkin) was added in 2021. 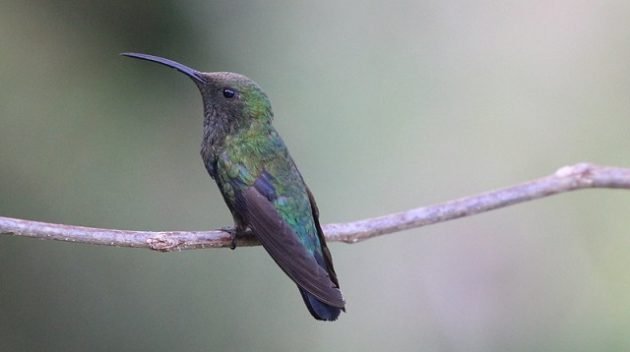 Although five years of data from a single CBC provides only a sliver of the overall picture, the population trends are positive. Moreover, the recovery appears to be consistent with those of earlier well-documented hurricanes, such as Hugo in 1989. The post-hurricane data tell a story of avian resilience. As the Fajardo bird community appears to have largely recovered, this will probably be my last update of this post. I have enjoyed tracking the recovery for the last five years.

Scientists continue to study the impact of Irma and Maria, which will improve our understanding of the impact of hurricanes on Caribbean birds. Among other things, biologists have determined that the impact of Maria on trees was much more significant than prior storms, likely due to climate change.

Once again, heartfelt thanks to Dr. Joseph M. Wunderle Jr., who wrote a number of the key scientific papers that formed the basis of my Birding article. Recently retired, Dr. Wunderle was a scientist at the International Institute of Tropical Forestry (IITF), a part of the U.S. Forest Service. He is also a founding member of BirdsCaribbean and the editor-in-chief of the Journal of Caribbean Ornithology. Dr. Wunderle is the compiler for the Fajardo CBC and graciously provided the data described above. 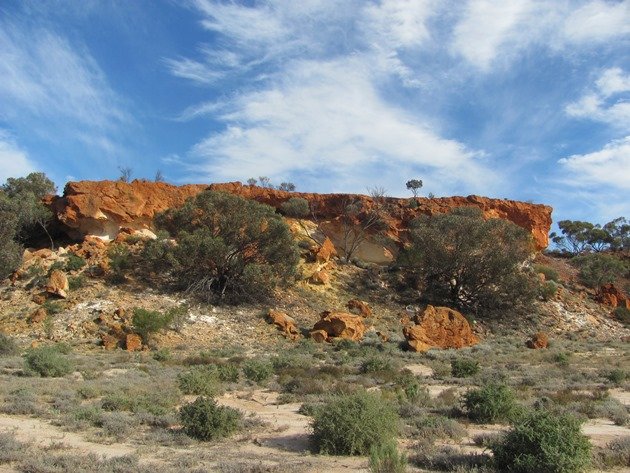 Where Are You Birding This Third Weekend of August 2016?