In southern Berlin there is a massive old decommissioned airport that has been turned into a park. Tempelhofer Feld, now generally called Tempelhof Park or just plain Tempelhof, has pretty decent habitat for open country birds, considering that it is huge, flat, and gradually returning to nature. Sure, the old runways and service roads are still there but the areas between them are not mowed very often, some of the paved areas have been allowed to go completely wild, and nature, as always, finds its way back in as soon as humanity turns its back. Just a note for birders who plan to visit Berlin with a non-birding companion – you might be able to convince them to accompany you to Tempelhof because of its historical significance. It was one of the busiest airports in the 1930s, is home to a building 1.2 kilometers long, and served admirably during the Berlin Airlift. Not only that, but as of its opening as a park in May 2010, it is the largest public park in Berlin.

During our family vacation we stayed at our friends’ house in Kreuzberg, the neighborhood just north of Tempelhof, which means a ten-minute walk would get me to some decent habitat in which to look for birds. Twice during our time in Berlin I made that walk for a couple hours of birding early in the morning and had some pretty good birds, including a lifer. So, what can a birder expect to see at Tempelhof in mid-August with minimal effort? Read on, dear reader, and find out! The most abundant birds during my visits to Tempelhof were Hooded Crows, White Wagtails, and European Goldfinches. Other species that were around in smaller numbers included Blue Tits, Common Redstarts, Great Tits, Skylarks, Eurasian Kestrel, and Northern Wheatear. The best bird of all, to me anyway, was a trio of Whinchats, the first I had ever seen. Sadly, they stayed distant, but I did get decent looks at two of them through the binoculars as they foraged in a brushy area.

I never saw another birder or photographer during my visits – the only people I did see were joggers, bicyclists, and people who worked for the park in one capacity or another. It was nice to have such a large area to myself, as everyone else I saw stayed to the areas that were paved, though I bet that later in the day and on the weekends there are more people around.

Other than the Whinchats, the coolest birds around were Skylarks. The habitat is apparently quite good for them, and I saw five on one visit and seven on the other. Skylark habitat sign above and Skylark Alauda arvensis below

While it would have been nicer to be around in spring to hear the Skylarks singing I had no complaints about seeing them.

All-in-all, Tempelhof is well worth a visit or two should you find yourself in Berlin and looking for a birding spot. 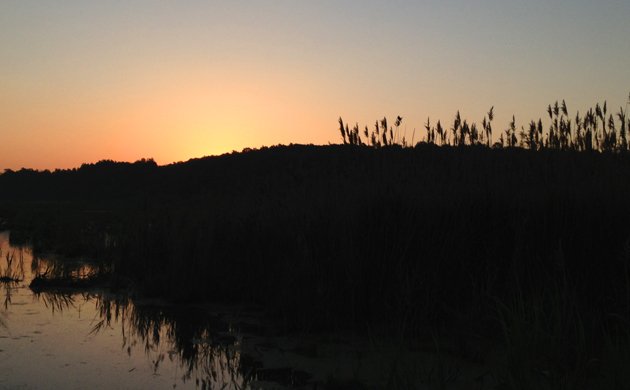