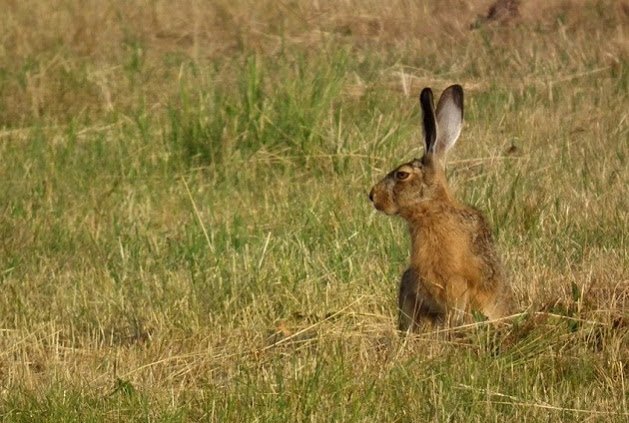 July morning in the Balkans, early enough to create an illusion of a cool morning, umm, almost. Wheat fields around me were harvested in the previous days. In the short, golden-brown stubble, one Brown Hare is hopping. Just for fun, it seems – joie de vivre?

I am driving down the dirt track in the Carska Bara Ramsar site (Serbia) and a cloud of dust closely follows me, like a rider on a pale horse. Alongside the road are European Stonechats, White Storks and the flute-like song of the Eurasian Golden Oriole comes from some thickets. One Western Marsh Harrier… and my first Lesser Grey Shrike this year.

Barn Swallows are flying above the canal, surprisingly full of water… sudden screams: a Eurasian Hobby is among them! The only falcon that has the manoeuverability to chase and catch swallows in flight… a few pirouettes later, he leaves with empty talons. The scorching July sun is up and we are baking in our Lada 4×4 oven. Oddly, Great Reed Warblers are finally silent. They were singing the entire spring, both day and night, as I discovered trying to find owls and nightjars after dark; and it comes as no surprise that their voice is so croaked, when their vocal cords must be worn out like old brakes.

Sweating profusely, I am driving along the dyke now; the Pale Rider close behind. Passing a Red-backed Shrike… one adult White-tailed Eagle flies by. Not far from the dyke, in the Tisa River floodzone, a Black Stork is foraging. One Purple Heron in flight and, on a dry willow branch, another White-tailed Eagle, but this one is young, very dark and with almost black beak – this years’ fledgling who has left the nest perhaps two weeks ago and still hangs around with its parents.

A dozen Ferruginous Ducks and several Garganeys in the shallows of the floodzone. We are observing them from the dyke roasted by the merciless sun – hot like in Hell, without a trace of shade in sight. A small mudbar brings three Wood Sandpipers, Northern Lapwing, Little Ringed Plover, White Wagtail, a Common Kingfisher… If any other bird appears to force me to stay in this oven for longer, I’ll be sure to twist its feathery neck! I am now blazing away towards a riparian poplar forest, a great place to rest and have some coffee in the shade. At my age, a field trip has to include coffee and to end with a snake-cold beer (snake-cold is Serbian expression and it probably does not exist in English, or does it?).

Through a narrow and barely visible gap, we enter the forest, bursting with ever-active Great Spotted Woodpeckers and filled with European Robin song. Taking the chairs out, oh, what a heavenly shade… gosh, mozzies! Spraying myself with an insect repellent and chilling out while waving my hand to scare the persistent zzzzzies away… After some ten minutes of futile attempts, we give up and retreat in disarray, letting the selfish little bastards have the entire forest for themselves.

Back in the open, a Black Kite, Marsh Harrier and the Common Kestrel are thermaling high in the sky, while the Pale Rider sneaks upon me again. And Hell followed with him.