There’s been some interesting bird research lately, having to do with the origin of birds (new analysis of new and old fossils) and the overarching taxonomy (using DNA analysis) but I’ve not had a chance to absorb this weighty new knowledge so I’ll probably write about it next month. Meantime, I wanted to point you to some current conversations about climate change and birds.

The Audubon Society just released Audubon’s Birds and Climate Change Report: 314 Species on the Brink. The web coverage at Audubon.org is an interactive product that may be too fancy for its own good but if you like this sort of thing you can learn quite a bit. There is an interactive region by region (using bird regions, such as flyways) and state by state guide to lost range (winter vs. summer) under climate change conditions. For the threatened birds, there are maps that show change over time (2000 to 2080) in viable ranges. The web site has a number of other features and organized bits of information.

The report itself is a few dozen pages long, and describes how “North America’s birds may respond to future climate change” using citizen science data. The various species are linked to habitat information, and the climate change information from the IPCC is used to estimate shifts in bird ranges.

Audubon’s Conservation Science team has generated three data products. Each offers a distinct way to engage with the science. First, there are lists of climate-sensitive species, with potentially broad application to all users. Second, there are maps of modeled climatic suitability under a range of climate change scenarios across three future time periods. These are available as animated illustrations on Audubon’s website and as data through ArcGIS desktop. Third, we have integrated the climate change projections into spatial prioritizations. These prioritizations highlight areas on the landscape that are likely to offer suitable climates for a single species or multiple species today and into the future. Prioritizations should have broad appeal throughout the bird conservation community. They can be used to strengthen the justification for projects already underway as well as to identify new areas in need of conservation attention.

Most of the report proper is methodology, much of the text is overly jargonistic, and there is no clear direction in what to actually do about birds threatened with climate change. But if you are interested in a particular bird species, go ahead and check out the web site and see what may or may not happen to that species as climate changes (in ways we can’t generally predict very well, but that likely mostly won’t be very good for most species).

Medium term, this research will likely help in conservation planning, figuring out which existing conservation areas have species that are more vulnerable, which species to focus on, and which geographical areas to focus on. This has to do with both direct climate change effects and with land use changes owing to climate change. Then, once you know which conservation areas or which species of birds are most vulnerable you can take action.

That’s the part where we get stuck of course. There really is no solution, or plan, to address this issue. 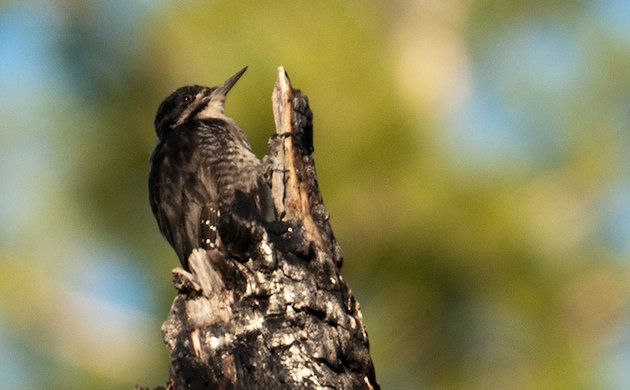