Birds that Costa Rican Birders Want to See the Most

No matter where or when we bird, we have our targets. Our bogey or nemesis species, birds that we would opt to see over others. Back in the early days of birding with optics, I wonder if such wanted species would have been birds that were much more common in present times. Perhaps elegant waders pushed to the edge of local extinction like Great and Snowy Egrets, or the Roseate Spoonbill? I wonder if birders in North America before European colonization were eager to watch the colors of a singing male Indigo Bunting go from shaded black to shining sapphire blue? Or, how many Mayan kids made it a personal goal to witness and marvel over a Resplendent Quetzal, its melange of golden-touched emerald and velvet red glowing through the mist of the cloud forest? 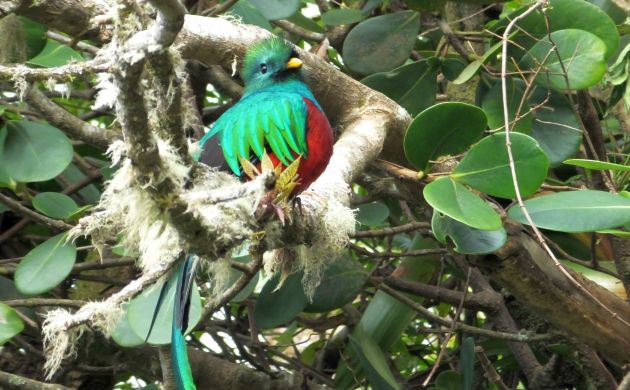 This bird does indeed glow.

In common with most birders, no matter how much I love watching every bird, I have my personal favorites. I love the challenge of “the hunt” and the satisfaction of the find but I also have the ones I want to see the most, my biggest targets if you will. In Costa Rica, the growing local birding community likewise have their lists of most wanted species, both local and global. I’ll start with some global ones.

When I was a kid, I remember asking about the possibility of seeing a Bald Eagle around western New York. I also recall the perennial reply, always something along the lines of the bird being very rare, we were still very much experiencing the after effects of DDT. At some point, I saw one of those rare ones, before the reintroduction programs had taken off, before they were expected. It was a high flying adult against a blue sky way above my house in Niagara Falls, I don’t recall the date but suspect that it happened during fall migration, maybe in 1980. I was of course elated, I even wondered if I had actually, truly seen a Bald Eagle because how could that be? Yet there it was big, dark with long wings, a white head and tail and no doubt with an amazing view of the Cataracts at Niagara.

From conversations I have had with Tico birders, they would be likewise elated to lay eyes on the fish eagle of North America. It will never occur this far south but thanks to the Endangered Species Act and recovery efforts, at least they an excellent chance of seeing Bald Eagles if they venture way north of Costa Rica.

Birders from up north are often surprised to hear about the great local desire to see a Cedar Waxwing. Tico birders are likewise typically surprised to learn that waxwings up north occur in flocks, whisper from the summer trees in city parks, are common, at times, maybe even abundant. In Costa Rica, a few adventurous (or lost) waxwings make it this far south but they tend to be elusive one day wonders rather than reliable ticks. Even if they are common in your neck of the woods, this is a beautiful, very distinctive bird and always a good find for Costa Rica.

I was pleased to see a couple this year in Costa Rica. I wish more birders could have seen them, especially some of the more fantastic birders in this land.

Many are on the Costa Rica list and many of those sprite songbirds are rare vagrants to Costa Rica, especially ones that are expected in Florida. Palm Warbler? Still need it for Costa Rica. Black-throated Blue? Same there. Prairie? Ditto. Each year, every wood-warbler on our official list probably forages somewhere within the borders of “Tiquicia” but finding them, that’s another matter. 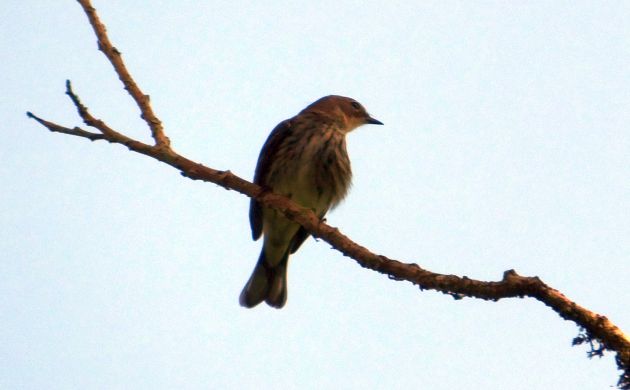 That I was excited to see a Yellow-rumped Warbler earlier this year shows how few of the common “butterbutt” reach our shores.

Back to a bird that doesn’t come close to occurring in Costa Rica, the desire to see this common Corvid is akin to the serious itch that North American birders can have for looks at a Hoopoe, Eurasian Goldfinch, or a Bullfinch. At least I felt that way before my first trips to Europe. We see lifers on labels, in memes, and in art books over and over and it’s a reminder that they exist, they are waiting, that you have to go see them. It’s like we are already familiar with them and need to see them in life to sort of “come home”. At least that’s how I felt when I got my lifer Hoopoe in southern France, when I saw the pink underparts of my first bullfinch in conifers at the edge of the French Alps. Among some local birders, it’s the same for the Blue Jay. It’s a reminder of how cool that bird really does look, that species and its red, crested counterpart.

Forget about how often you might see this stunning garden bird and imagine watching one for the first time. I sort of relive that feeling every time I go back to the Falls. While my daughter makes cookies with grandma and her cousins, I relish the song of this  familiar and yet exotic bird. Some local birders in Costa Rica can hardly believe it when I say that the redbird is common, it lives in gardens, it comes to feeders. Thanks to many depictions (and therefore promotion) of cardinals in the world of arts, crafts, and decor, many a non-birder would also love to see a Northern Cardinal.

Leaving the most wanted bird for last, the large white owl of the north is a dream for many a local birder. There’s no way it’s going to come to hot Costa Rica, and yet we know it’s up there, far to the north in open freezing fields, places where most local Tico birders can’t fathom how cold it can get. Number one on the most wanted list of many and how could it not be, it’s a massive, mostly white owl for goodness sake! 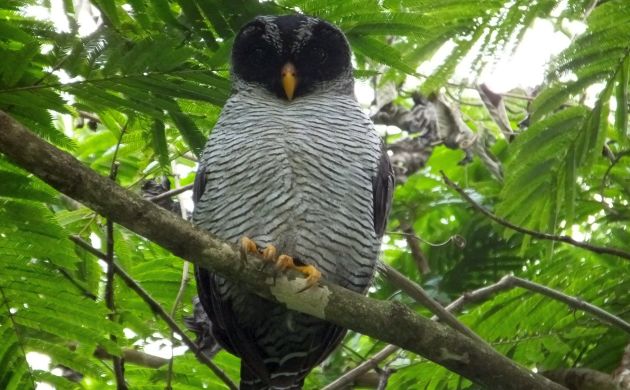 At least we have the Black-and-white Owl.

It’s not just birds far from home that local birders really want to see. Many species that live right here in Costa Rica are also very difficult to find, have prominent positions on local target lists, and some have attained near mythical status.  Some of the more  desired species include birds that are uncommon and very local such as…

Pinnated Bittern – Not nearly as common as its American cousin.

Yellow-breasted Crake– Along with most other members of their reclusive family. 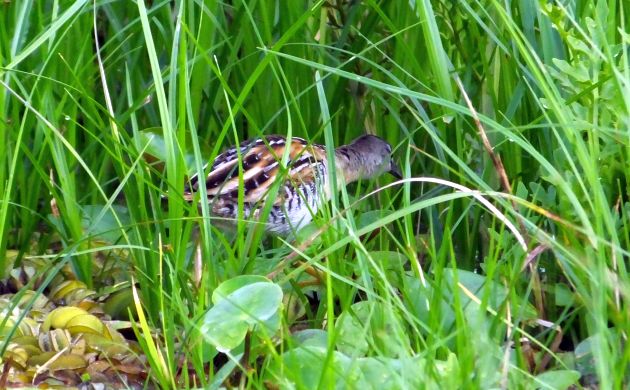 A crake creeping through the grass from the easiest place to see it in Costa Rica, Cano Negro.

Sulphur-rumped Tanager– Not so colorful, it loves to stay way up in those rainforest trees and be a silhouette.

Unspotted Saw-whet Owl– It doesn’t migrate, so no chance at finding a roosting bird in a conifer.

Rufous-vented Ground-Cuckoo– Very, very sneaky, smart, and rare, I’m sure it often watches birders walk on past without revealing itself.

Lanceolated Monklet– A minute, usually immobile featherball, although I have found several, it’s a really tough bird to get.

Great Jacamar– Since we see lots of Rufous-tailed Jacamars, everyone wants to get this one. The only problem is deforestation has made it very rare.

Cotingas– Birds that look so weird, cool, and beautiful, they make your head spin. Most are tough, a few are endangered. 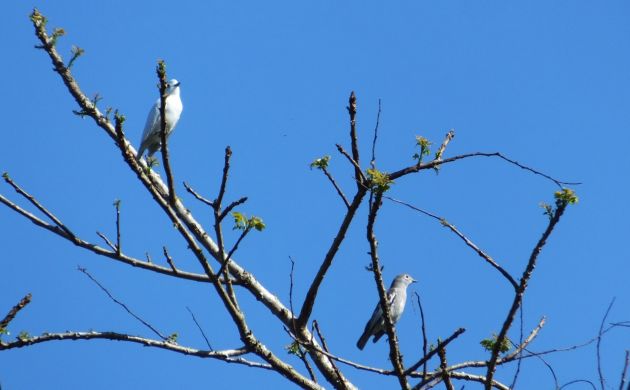 Snowy Cotingas aren’t endangered but they aren’t common either, and are always awesome.

Violet-green and Cave Swallows and other rare migrants. 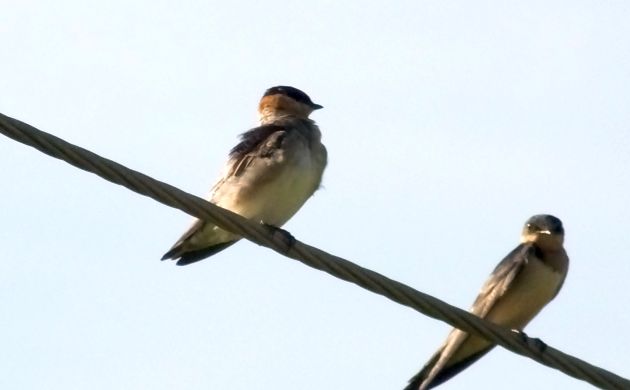 My 2017, Costa Rica Cave Swallow, Chomes in November is a good place and time for it.

Then, we have the ultra rare, mythical ones…

Which world birds do you want to see the most? A quetzal? A cotinga? A Wallace’s Standardwing? Tell us about your most wanted birds in the comments and what you would do to see them. Although the standardwing won’t show in Costa Rica, we do have quetzals! I hope to see you here. 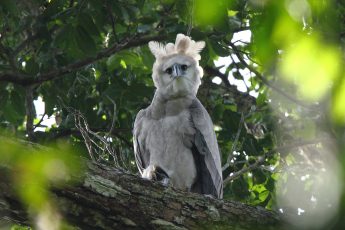 « Previous post
DDT, oil spills, and a wall.
Next post »
Where Are You Birding This Third Weekend of August 2018?