Just yesterday, I received a interesting plea for assistance:

I googled birds + Puerto Rico and yours was the first and best site to come up. I hope you can help us. We were just in PR visiting family and we came across this bird. My sister gave it to my uncle who has a small finca with some gallos and such. Anyway the bird has everyone baffled. My uncle seems to think it is a dove crossed with a cockatiel. My wife thinks it is either a ptarmigan way off path or an immature kite. To me it’s quite a neat oddity.

Can you help us identify it?

Usually, I feel confident that I can chase down a bird’s species with a bit of effort. But take a look at this picture: 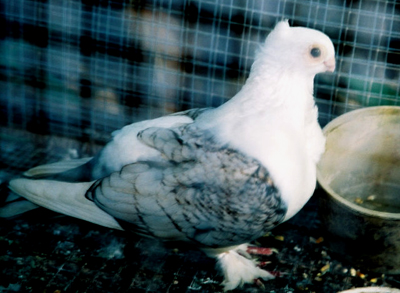 Clearly, what we have here is a member of the family Columbidae, to wit, a pigeon. The real question, though, is what kind? This specimen is not one you’re likely to see pecking at bread crumbs in the streets of Old San Juan or anywhere else in Puerto Rico, so that field guide isn’t of much help. In fact, this pigeon doesn’t look like a wild bird at all. Perhaps the cage gives it away. This fellow is one of those fancy pigeons, which means that the concern is not its species (Columba livia) but its breed.

I don’t support caging birds of any kind. However, the task of identifying a different type of caged bird, say, a parrot in a pet shop, would be easier. One would be able to consult field guides and other wild bird resources since most caged amazons, cockatoos, cockatiels, conures, macaws, and budgerigars were either taken from their natural habitats or closely descended from birds so taken. Fancy pigeons are different. Bred with great care and purpose over decades or longer, these birds have differentiated into roughly 200 distinct breeds, each one further complicated by its own array of plumage variations. What I’m trying to say here is that finding a fancy pigeon breed in a haystack isn’t easy.

Nonetheless, your humble host hates to disappoint. Our subject is very short-billed with distinctive white plumage and extensive feather growth below the leg joint, what are called, in the business, grouse legs. These traits point to one particular breed, a relatively rare show pigeon as opposed to a roller or racer. This pigeon is, in fact, an owl, an Old German Owl pigeon to be precise. The Old German Owl is a robust, amiable pigeon of medium size with a shell crest and frill and three distinctive plumage styles: shield-marked, tail-marked, and self-colored. Our subject is shield-marked, so named for the contrasting coloration of its wings. This pigeon should do well on uncle’s finca, as birds of this breed were often called Farmers’ Owls in Europe because they were commonly kept on farms. In any case, I’m sure a finca is better than a cage any day.