Can Birds Be Safe? If Only. 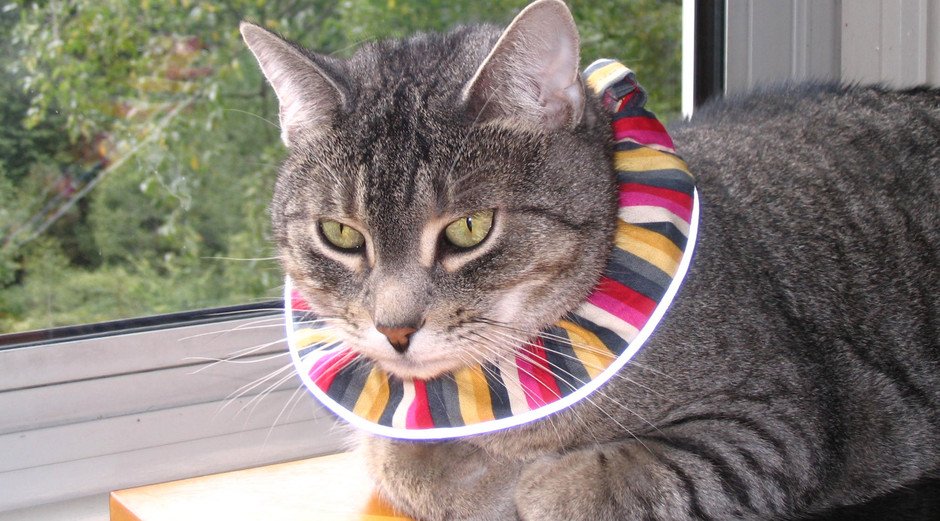 Another product has been invented that could supposedly cut down on the number of wild birds killed by domestic cats. Created by Nancy Brennan, Birdsbesafe  looks like a stiff, brightly-colored Elizabethan collar – not the long plastic post-surgical cones that pets occasionally have to wear, but a small donut that fits around the cat’s neck without getting in the way. The idea is that brilliant colors will warn birds that something is coming, and they’ll fly away.

Bells don’t work; cat bibs sometimes do, but cat owners rarely use them – saying they’re “too restrictive.” The same cannot be said about Birdsbesafe, which allows the cat as much movement as it wants. Birdsbesafe was invented in 2009, has a website filled with testimonials, and has received high praise from St. Lawrence University associate professor Dr. Susan Willson, who led a field study involving pet cats in 2013 and 2014. “The Birdsbesafe® collar is highly effective at reducing bird deaths,” she writes. The testimonials all credit Birdsbesafe with reducing the number of birds killed by pet cats. A sampling:

“It was heartbreaking to watch (my cat) bring home between one and four birds a week.”

“Three of my eight are prolific bird killers. I found it so distressing to see them bring me back dead birds.”

“Before we ordered Birdsbesafe collars, our two cats… were bringing in birds frequently, and it was breaking our hearts.”

“… our cat … has been tormenting us daily with dead birds on the back porch. Sometimes two or three a day!”

All these tender, tormented people, spending years crying crocodile tears about maimed and butchered birds, when all they had to do was close the door and keep their lethal property inside.

“My cat is a ferocious birder … and I am also a serious bird lover.”

Right. And I am a serious environmentalist, and my heart bleeds every time I take my old car batteries and leftover rat poison and dump them in the river.

Does Birdsbesafe work? It might be better than nothing. Will the people who determinedly allow their cats to slaughter wild birds use it? I desperately hope so. The woman who invented it was a responsible cat owner who never let her cats outside; she then married a man who let his out all the time, leading to an invention instead of the usual piteous hand-wringing. Her product could have an impact on pet cat-caused bird mortality rates. “The conservation implications are clear,” writes researcher Dr. Susan Willson. “If owners of outdoor cats choose to use Birdsbesafe® collar covers, a significant factor in the decline of songbird populations would drop precipitously.”

If they choose to use it. If.

Once again, if it can cut down on the carnage, it’s better than nothing. But I have been rehabbing wild birds for 25 years, and have seen the dead-eyed shrugs of those who hand me bloody, shredded little birds, say “it’s just nature,” and drive away feeling as if they’ve done something heroic.

Outdoor cat owners: does the sight of the mangled birds your well-fed pet drags around upset you? Then keep your cats inside. No product works as well as taking responsibility for the agonizing deaths for which you are personally responsible, and keeping your cat indoors has the added benefit of protecting it from cars, predators, disease, starvation, fights, traps, guns, poison, etc.

However, if you don’t mind subjecting your “beloved” pet to all these hazards and you feel so, so sad about all the dismembered songbirds lying all over your living room, it’s better than nothing – just like having ten shots of tequila and driving is better than having twelve. And remember – it won’t help fledglings at all, as they’re still trying to figure out what is dangerous in their strange new world. Your cat’s bright new collar will not save them, just as putting it on your cat and letting it outside will not make you a decent pet owner.

Sarah Palin Secretary of Energy or the Interior?