At the end of part 2 of the Century Run Saga it was a half an hour shy of noon and Will, Danika, Chad and I were descending from the wilds of western Albany County just a bit shy of 100 species for the day (part 1 is here).

Our next destinations were two reservoirs: Basic Creek and the Alcove. Both supply water to the city of Albany and neither permit birders or anyone else to stop. They actually have 24-hour security! But before we got to the reservoirs we spotted roadside Bobolinks and Eastern Bluebirds, both birds that could have been missed. Driving very sloooooowly over the Basic Creek Reservoir’s causeway the first thing that caught our attention were the swarms of swallows feeding in flight. Tree, Barn, Northern Rough-winged, Cliff, and Bank Swallows were all spotted and Danika also got us on a pair of Mute Swans, saving us a long drive to Vosburgh’s Marsh, the only reliable spot for swans that we knew.

Giddy over our success, we ignored the Bald Eagle we spotted as we drove sloooowly past the Alcove Reservoir (after all, we already had one). Our giddiness turned to ecstasy when we picked up both a late Ring-necked Duck and a Common Loon!

The next stop, Stanton Pond, provided us with the expected Gadwall (for some reason they love lingering there) and unexpected Least Sandpipers and a Semipalmated Plover. From there we went to the Holt Preserve looking for a Hooded Warbler and left with only dog ticks to show for our effort. Next up was Deer Hollow, a relatively high elevation spot that we would normally be visiting for Worm-eating Warbler but because we already had one we were hoping for the previously reported Northern Waterthrush or the Winter Wren that Will and Danika had heard there earlier in the week. We didn’t get any of the aforementioned three birds but we did finally get our first Pileated Woodpecker of the day thanks to Danika’s good catch and our first Eastern Wood-Pewee thanks to Will’s good ear (not a typo, he has one good ear). I also made myself into an idiot by calling a female Scarlet Tanager a Yellow-throated Vireo though in my defense I will say that it was a leaf-obscured view.

More stops along power line cuts did not get us our Indigo Bunting and the gravel road along the in-this-case-aptly-named Mount Misery, which is actually just a big hill did not get us Winter Wren or Hermit Thrush or anything else we needed, but did bring us into Greene County. Chad did manage to spot the only Turkey Vulture of the day however, which is kind of ridiculous considering a normal day’s birding in the area usually results in at least several sightings.

The Coxsackie Reservoir held the only Double-crested Cormorant of the day, a juvenile, more Common Loons, and I am proud to say that I first picked up on the calling of a Black-billed Cuckoo (we’ll ignore the fact that I wasn’t sure which cuckoo it was at first).

Our walk through the fields at the Coxsackie Creek Grasslands Preserve rewarded us with one of the three targets, a Savannah Sparrow, but failed to provide us with Eastern Meadowlark or Wilson’s Snipe. We did get the first Lesser Yellowlegs of the day and some more Least Sandpipers which we were really hoping were something, anything, else. A quick drive along Industrial Turnpike got us our Eastern Meadowlark and another stop, at the Coxsackie Boat Launch, got us diddly.

On the way out of Coxsackie we stopped alongside some fields, hoping for something cool, and when nothing really interesting appeared we moved on…until Danika asked, “Which sparrow has white outer tail feathers?”

The ride to Albany was uneventful and we’ll return to this tale tomorrow in Part 4: Exhaustion Sets In. 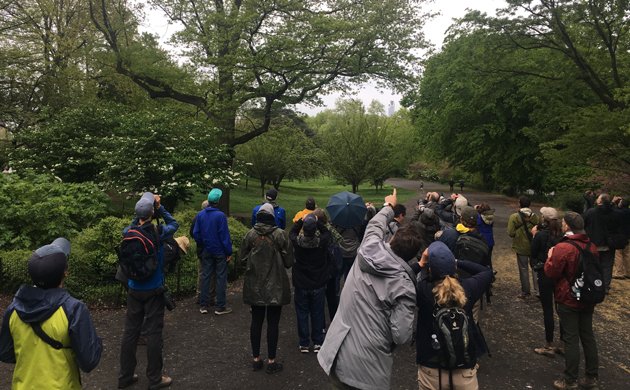