When climate changes, causing habitats to move, birds can get up and fly away to a new habitat, so really, they’ll be fine. Right?

Well, that’s probably a little bit true, but only a very little bit. I’ve been working on climate change lately (not causing it, but reading and writing about it) and birds have come up in a few places. I’d like to take a moment to touch on a few disparate aspects of the relationship between climate change and birds.

This relates to another old project of mine where, buried in some contract archaeology reports, I was able to show that during rapid periods of sea level rise in New England, coastal ecosystems were species poor and somewhat fragile because they lacked many different trophic levels and other ecological connections. A lot of this has to do with the fact that as sea level rises, marshlands, which are the the basis for a lot of fish and bird ecology, are wiped out, but if sea level remains stable for a while, or changes only slowly, coastal marshes have time to form. Imagine a world where suddenly, everywhere, all marine coastal region including estuaries had only 10% of the marsh grass and shallow marshland that they do now. This is not hard to imagine because humans have wiped out most of the marshland in certain developed areas and we can see what happens there … you get seagulls and pigeons, or their equivalent, and little else. Similar things happen to both fish and birds. Species diversity drops and the systems become very simple and uninteresting, and probably not very stable.

We have not observed sea level rise to a great degree with climate change, but it is about to happen. Over the next 20 or 30 years there will likely be some dramatic events along these lines. Keep watching. And roll your pants up.

Another aspect of sea level rise that will be interesting is the basic nature of the shape of the coast lines vis-a-vis bird ecology. For example, the Gulf Coast of the US is marshy and has a giant delta and lots of barrier islands, but the coast of the Maritimes and Maine don’t. There are a number of reasons for that, but the main overarching reason is chance; It just happens that certain climates (sub tropical vs. temperate) and certain shoreline configurations, coincide (or not). The eastern Yucatan and the corresponding regions (with respect to sea and air temperature) of western Mexico and Central America are very different in their geological configuration and other features. The coast of California is high and cliffy and there are no barrier spits, while the East Coast of the US is low and marshy with sandy barrier islands. And so on. Every coast and climate confluence around the world is (mostly) a product of random associations between geology and regional climate.

Well, imagine raising the sea level 20 meters (and yes, that is more than a little bit possible). The geology along which the coast nestles will be different than it is now in many regions. Not only will the coast line move, but it will fundamentally change in ways that matter to the birds that live in those vital habitats.

Penguin: Is their goose cooked?
Penguins have already been taking it in the neck in places where shore-line shelves of ice have broken up or moved around in the antarctic. Penguins can be trapped in low areas created by breaking up ice. Their nesting ground can be destroyed. Their food supply can be affected. So far, the Penguins on Ross Island have not done very well. Almost all of the Adélie Penguins there are gone, and the Emperor Penguins there are now extinct, all because of global warming related changes. With global warming, we might expect a lot of the ice around the margin of Antarctica to disappear (though there will presumably be winter snows). We can expect most of the Antarctic Penguins to either go extinct or become very vulnerable. And, in that region, Penguins are a keystone species for some of the other birds.

Global warming, a major part of climate change, matters to birds, has already mattered to birds, and will likely matter a great deal more over the next century. 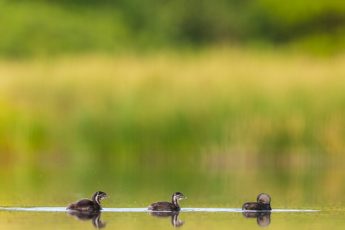