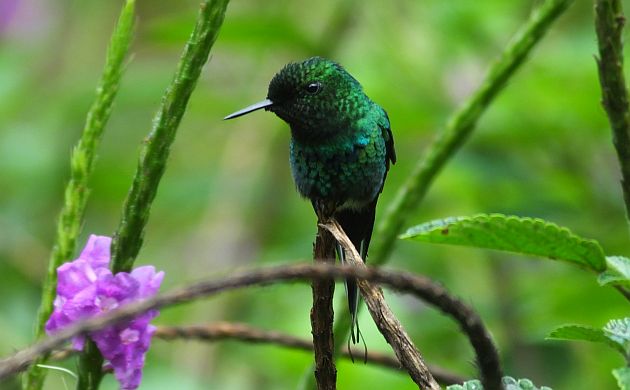 Hummingbirds. Those lovely feathered sprites that visit our gardens, feeders, and even take part in adorable bathing practices on odd, red vases. So easy to love, admire and cherish! And yet…take a closer look and you won’t find any hummingbirds acting like cute little singing birds ready to perch on the finger of some lost, happy princess. No, more like ruthless mini-dinosaurs ready to poke your eye out. Well, maybe not us Homo sapiens but you can bet that a familiar and seemingly innocuous Ruby-throated Hummingbird wouldn’t give a second thought about taking out a person if it knew it could get away with it. It would use that mini rapier of a beak to full poking effect if the hapless human tried to take a sip from its feeder, or pick one of its flowers, or even neglect to fill the feeder on time. 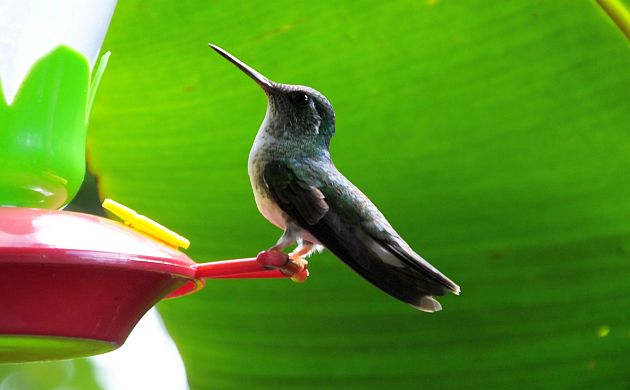 She puts the sugar in the basket…I mean feeder…
When a hummingbird checks you out up close or makes chipping noises on a nearby perch, it’s not wishing you well. Based on secret birding investigations, we have found that the bird is actually assessing whether or not it can poke you with that bill and then, when it has to once again accept that it cannot take on the big human, our “friendly” hummingbird lets loose a stream of avian obscenities that would bring a blush to the cheeks of the most briney of drunken sailors. Trust me, we are better off not being able to translate all of that hyperactive sputtering. 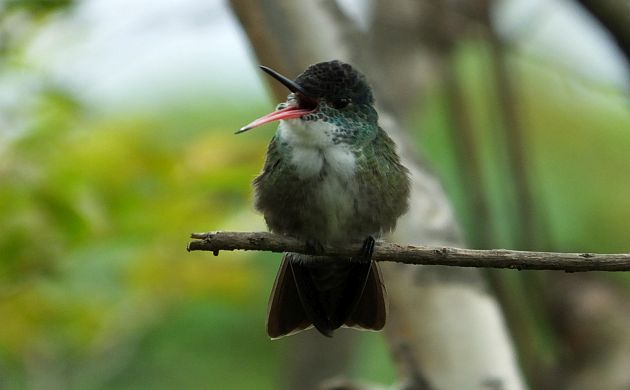 An Azure-crowned Hummingbird saying something vile.
When it comes down to it, although I hate to say it because I love watching them, members of the Trochilidae are jerks! Maybe even pyschos. And that begs the question, anthropocentric comparisons aside, what makes a bird a jerk? 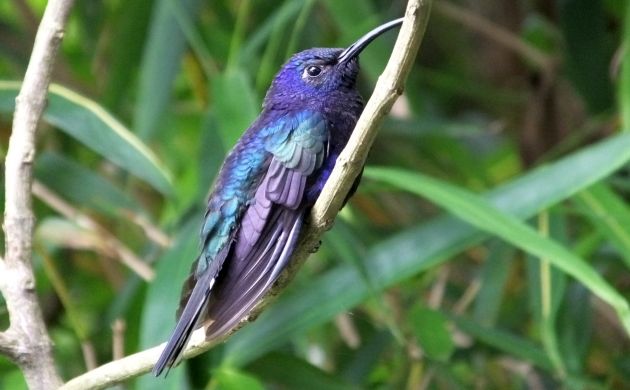 Being a big and beautiful Violet Sabrewing doesn’t mean that you aren’t actually a jerk.
Well, based on careful observations, being accosted by hummingbirds in the field, and actually realizing what they are saying, these are some of the main reasons why the stunning beauty of these glittering little dynamos belies their true jerky nature:
It’s all about me– Us humans are social beings. This is because we have had to work together to survive and thrive as a species, and that’s probably why selfish behavior is not generally viewed as being the nicest of ways to be. For hummingbirds, though, since cooperation leads to quick starvation, they ain’t no such thing as a team! It’s all about their own nasty little selves! With such out of control metabolic needs, we can’t really blame them for being all about the ego but natural explanations aside, we can’t forget that the “only me” imperative sort of turns them into automatic natural jerks. Don’t make excuses because like would you make excuses for Anopheles mosquitoes adapted to feeding on us humans and giving us itches, sleepless nights, and choice diseases in the process? I would hope not! No excuses for them and none for hummingbirds either. I’m sorry, but the ravenous mini, modern dinos are jerks. 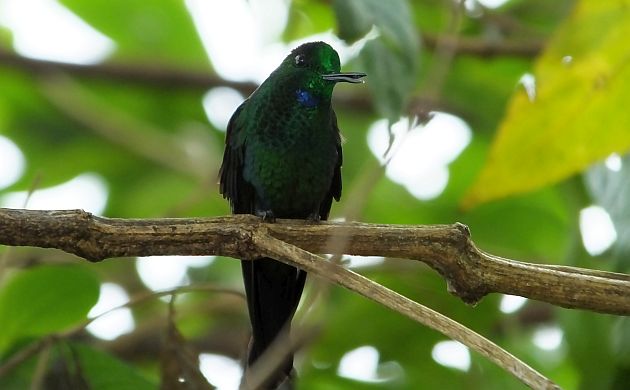 C’est moi, Green-crowned Brilliant, le jerk!
Fighting, bickering, and more fighting– I think it’s safe to say that most of us experience enough of arguing, fighting, and other awful toxic behaviors to not need any more of it in our lives. Pick up the newspaper, turn on the news, go for a drive on a crowded highway and we are all too easily subjected to witnessing negative behavior. It’s not good for anyone and might be why many of us prefer to go birding out there in the woods, away from it all.
Hummingbirds, on the other hand, just can’t seem to pass more than a few minutes without going into a rage and attacking the nearest fellow member of their avian family. It’s almost like they are always looking for a fight, non-stop, all the time, and you know what? I’m pretty sure they are! No, “Hello there fellow Coppery-headed Emerald, my how nice you look on this fine tropical day!” Instead, upon seeing another hummingbird, it’s usually one of two extreme reactions. It either sputters and spits, “Aghhhh! Rage! $%#$$$#%%!!” before immediately flying like a living dart at the unlucky object of its nefarious attention, or, if it knows it can’t get away with an attack, sits back and fidgets in absolute psychotic dismay at not being able to fight. They can also sputter at moments like this but it usually takes the form of frustrated grumbling. Yeah, they are kind of intense, but suffice to say, if you always want to fight and go into nectar rage, you might just be a jerk. 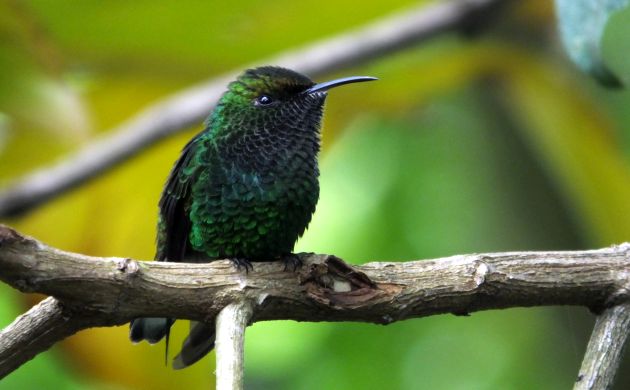 Coppery-headed Emerald itching for a fight.
No #@^%% photos!– Yes, one can get pictures but not when YOU want the picture. It’s only when the hummingbird cares to be photographed that it allows this to happen, and that’s usually because it’s too busy plotting how to bill fence with its fellow hummingbirds to be aware of the camera. However, once it does know that someone wants to capture it with the camera, it usually waits for just the right moment and then buzzes off, likely snickering in nasty joy as it does so.
Show-offs– In being such selfish little creatures, hummingbirds also happen to be natural experts at narcissism. Don’t let them kid you, they are fully aware that they have jewel-like plumage and look sort of unbelievable. They aren’t going to win any awards for being the humblest birds in the forest because most hummingbirds can’t help but show off. They do so with outrageous courtship behaviors, by flaring their gorgets to bedazzle us human observers (probably thinking that in doing so, maybe they can spear you), and perching in full light to display their crazy colors. Although this is one of the times when we really can take pictures of them and feel pleased with the results, just remember, they aren’t doing it for you. That’s just a ruse. It’s all about them and as soon as they change their mind, off they will go for another raging attack or escape to a perch that foils further photographic attempts. 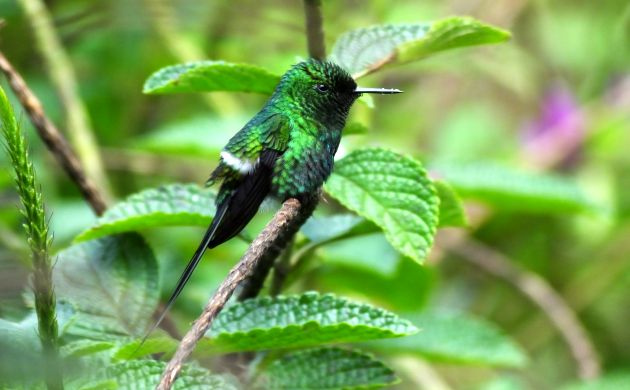 “It’s all about me suckers!!”
Those of us who have been birding for some time are fully aware that some birds really do conspire. At least this is what my local fantastic birding team has discovered on more than one occasion, particularly with the trials and tribulations encountered in photographing the Barred Hawk. That said, based on careful observations of hummingbirds, I can also state that beauties like the Purple-throated Mountain-gem, Talamanca Hummingbird, and even the Violet Sabrewing might actually be the true kings of avian conspiracy. Don’t be fooled by the fancy dress, these birds are actually jerks. Now that doesn’t mean that we shouldn’t watch them, just that you might want to use safety glasses to be ready for the day when hummingbirds actually do unite. I shudder at the apocalyptic thought because zombies got nothing on raging descendants of dinosaurs naturally armed with their own wicked little swords. 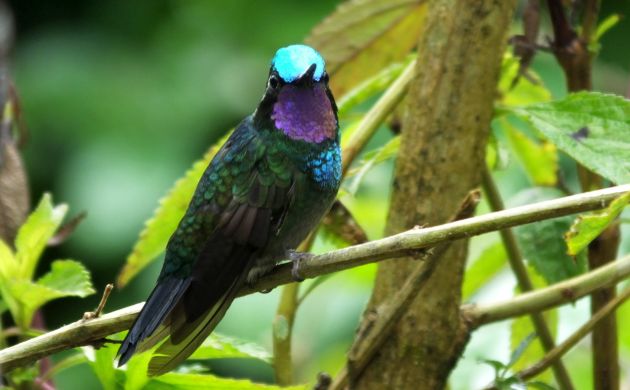 Don´t be fooled by the dashing colors of the Purple-throated Mountain-gem!

…
Come@Me Week is a cheap ploy ginned up by some high priced consultants we at 10,000 Birds hired and then stiffed on the bill. We’re desperately trying to stay relevant in a bird blogosphere being decimated by Facebook, Twitter, Instagram, and memes. We here at 10,000 Birds have no shame and it was either this or lots of posts about woodcocks, boobies, and woodpeckers. All the posts in Come@Me Week are probably the opinions of the authors of said posts and no one else. Well, except maybe you. Weirdo. Agree? Disagree? We’ll see you in the comments. Or, more likely, on Facebook. Sigh…
Come@me Costa Rica
Share:

Baby It's Hot Outside!