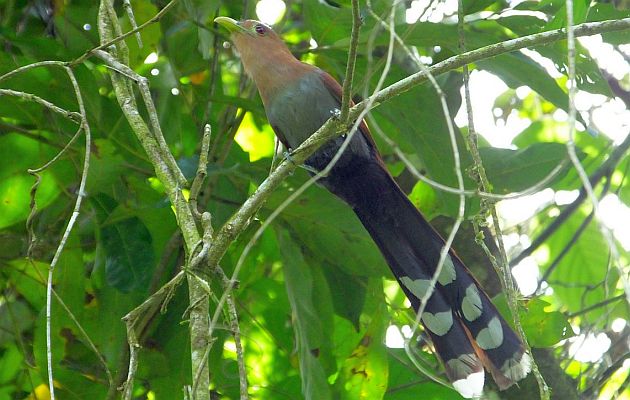 Hedgerows are living fences and windbreaks, lines of green space that bisect fields and pastures. They can’t provide the same ecosystem value as natural forest and woodland but in places intensely modifed by people, hedges are vital sanctuaries for birds and other wildlife. In Costa Rica, we have those living fences, these planted rivulets of green. On some coffee farms, hedgerows can be wonderfully developed tangles of native trees, vines, and introduced plants. In pastures of the hot lowlands, they tend to be lines of stunted Gumbo-Limbo trees or some other heavily pruned species. In keeping with the depauperate biodiversity of open fields, such scraggly hedgerows host very few birds.

The more developed hedgerows are where we find life, where we can see flycatchers and tanagers feeding on berries and note the clumsy stick nests of White-winged Doves and Red-billed Pigeons.

In addition to those birds and the Squirrel Cuckoo pictured above, the following are some of the more common hedgerow species of Costa Rica. You’ll find them in other types of edge habitats too. It’s worth learning these common birds of Costa Rica before visiting; you’ll probaby see them.

Rufous-tailed Hummingbird and other hummingbird species

Take a walk by any hedgerow in Costa Rica and you’ll probably see a Rufous-tailed Hummingbird. Keep looking and you might see some other members of this glittering, fast-paced family. In the Central Valley, those additional species tend can include Blue-vented Hummingbird and the Plain-capped Starthroat.

Although more than one parrot and parakeet can forage in hedgerows, this long-tailed green bird is the most common. Listen for their typical, parakeet screeches and when they take flight, watch for the red and yellow on the underwing.

Bold and in your face, you can’t miss the Great Kiskadee. This species loves hedgerows, especially well developed ones with small fruits and an abundance of insects. While watching kiskadees, keep an eye out for the smaller yet common Social Flycatcher and, in areas with taller trees, the Boat-billed Flycatcher.

It’s worth knowing the Tropical Kingbird too, a species that loves hedgerows as much as it likes roadside wires.

This bird with the prominent crest is a classic hedgerow species. Reminiscent of any number of Asian bulbuls, it loves to feed on small berries. Listen for its “screaming” vocalizations.

Like the elaenia, this fair-sized wren does very well in hedgerow habitats. Go birding where it occurs and you’ll probably hear it. Be patient and you should eventually see it too.

Another typical bird of hedgerow habitats, I hear the whistled song of this cardinal-like bird each and every morning. I also hear and sometimes see one perched at the top of a bush while I am waiting in traffic. The bird sings loud and clear as dirt bikes and cars rush by, as people people converse and pass by on sidewalks. As long as hedges are present, this cool tropical species does very well in urban habitats.

We have House Sparrows too but this bird is much more common. This is our usual sparrow, the one that sings a cheery song from a roadside wire, the ones that forages on the ground. Hedgerows seem to provide important breeding spots for this smart looking bird.

This beautiful little bird is a common species of hedgerow habitats and thank goodness for that because the day is always better when you see a wood-warbler.

Common and widespread but this pale sky blue bird is a beautiful bird nonetheless.

The birds shown above are some of the more common hedgerow species of Costa Rica but they aren’t the only ones. Many other birds also use this controlled green space, birds like Lesson’s Motmot, Brown Jay, Yellow-green Vireo and various other reisident species. Migrant birds in Costa Rica feed there too, many Red-eyed Vireos, Eastern Kingbirds, Scarlet Tanagers, Yellow Warblers, and other species. I see hedgerows and they are a reminder of the massive impact we have on our natural surroundings. However, I see the birds that use them and am reminded of their positive role in urban surroundings. I hope we can reforest wherever possible but I also hope more people can perceive the value that mature hedgerows bring to a neighborhood, of preserving this naturally sculpted green space instead of cutting it down. 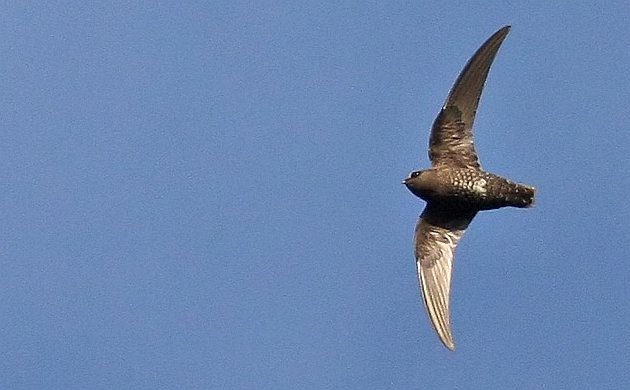