Do Not Feed Baby Birds Milk or Bread 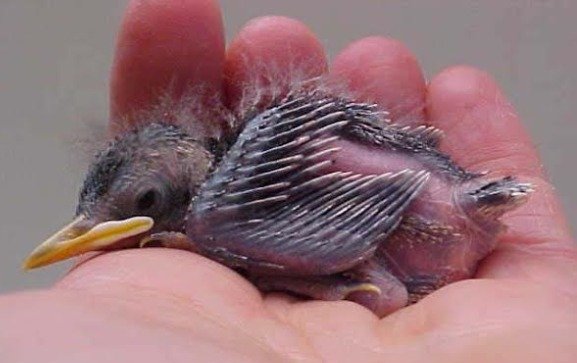 Birds have no boobs.

Although it might look like they could have a pair or two lurking beneath all those chest feathers, they actually don’t. Birds hatch out of eggs, like some species of snakes, who also have no boobs, although with a snake the fact is more readily apparent.

While snakes protect their eggs, and may protect their young for a short period of time after they hatch, baby snakes are very soon on their own. Not so with birds, who are taken care of by either the mother or both parents until they are old enough to fly. Care does not include milk. Since baby season is in full swing, people who find a seemingly orphaned baby bird(s) should first make absolutely sure that the parents are not around. If they baby has simply fallen from the nest, put him back in, and the parents will resume their care. Please, please try to limit the cutting down of trees to pre-and post-nesting season; but if a nest should fall and the babies are not injured, the entire nest can be wedged safely into a nearby tree and the parents will continue where they left off. A makeshift nest can be made of a plastic fruit container, or a small wicker basket, or something that will allow water to drain out should it rain.

What if all else fails and there are definitely no parents around? Call a wildlife rehabilitator! Meanwhile, if the nestlings have been by themselves for more than a couple of hours, steel yourself and squish a bug or cut up a worm. Offer it with a pair of tweezers, or impaled on the end of a very small stick. Pet stores sell mealworms in small plastic containers, which will do the the trick until the rehabber takes over; just make sure they are tiny little mini-mealworms, and not the big mean ones that can actually bite you and which would make short work of a nestling songbird. Feeding tiny bits of blueberry will help keep the nestlings hydrated until you can them to a rehabber – which should be as fast as humanly possible.

In summary: unless you’re a cow or a human, cow’s milk is always a bad idea. Even wild mammals – fawns, squirrels, bunnies, etc. – will develop serious and often fatal stomach problems if fed cow’s milk.