Speaking of fallouts, we’re enjoying a virtual bumper crop of fall favorites. The woods in my part of New York are about as active as they get. Multitudes of American Robins are either staging or fattening up, depending on whether they’re migrants or residents…we have plenty of both. Blue Jays seem to be doing the same. These species, along with Northern Mockingbirds, Mourning Doves, pigeons, and starlings, will hang around all year, but their success this winter may well depend on how they spend these critical weeks of autumn.

The real treat is the anticipated fallout of late migrants, the last such wave of tropics-bound travelers we’ll see this year. Of course, Yellow-rumped Warblers with their signature butter-butts are flitting about everywhere, as are the smaller, more ebullient Ruby-crowned Kinglets. Although accompanied by other species like American Redstart, Black-and-White Warbler, and Golden-crowned Kinglet, these are species that dominate the vagabond hordes. Not all of these travelers will be moving on. Winter birds like Dark-eyed Juncos and American Tree Sparrows have alreadt started to inflitrate House Sparrow flocks, a change for the better as far as I’m concerned.

These, along with the usual local woodpeckers and raptors, are the birds I regularly associate with mid-October in the Bronx. However, we enjoyed two special sightings this past weekend. The first was a mature Bald Eagle soaring over Mason’s favorite park. We’ve spied bald eagles over the Hudson River before, especially in the cold months, so this bird’s appearance just reinforces the encroaching sense of winter. Our second sighting was completely unexpected, a species that Sara had never even seen before. Lest you think that scrutinizing every bird in a flock of yellow-rumps is a fool’s errand, think again. I picked out a Blue-headed Vireo so confiding that it was easily identified with the naked eye, so engrossed in its busy gleaning that I was able to run for my camera and still capture some decent shots. Harvest time! 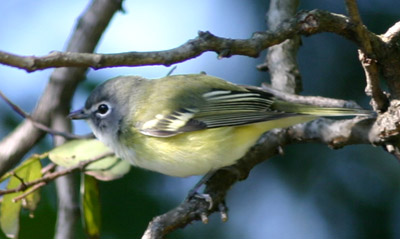