Patrick of The Hawk Owl’s Nest and I met up this weekend for a spot of winter birding at the incomparable Jamaica Bay Wildlife Refuge. Sticklers among you might point out that winter hasn’t officially arrived yet, but that frigid wind blowing off the bay says otherwise. Patrick, a denizen of New Jersey, had never visited Jamaica Bay, so I offered to show him around one of my favorite birding patches anywhere. Honestly, a birder of his caliber could find his way around the simple West Pond loop without trouble, but I owed him for the expert tour of Sandy Hook in October.

Jamaica Bay is productive all year round, though different species tend to rotate through the roster by season. December’s specialty is waterfowl, and that’s what we saw. Of course, the usual Canada Goose, Mute Swan, Mallard, and American Black Duck posse was in effect, but the West Pond also offered up American Wigeon, Gadwall, Green-winged Teal, Northern Shoveler, Red-breasted Merganser, Hooded Merganser, American Coot, assorted scaup, and rafts of Ruddy Duck. The bay sheltered lots more scaup, both Lesser and Greater if reports are accurate, along with Bufflehead, Brant, Snow Goose, and even a Horned Grebe or two. The Horned Grebe may be a more exceptional sighting, but Snow Goose was my target species, #300 on my year list. My ace in the hole was that I had spotted a chevron of snow geese from my apartment window the day before (new for that list too) but I wanted a better view of that beauteous black and white bird. Who wouldn’t?

The songbird population at Jamaica Bay, while not surprising, certainly seemed healthy. Song, White-throated, and American Tree Sparrows were everywhere, often mixed in with House Finches and Yellow-rumped Warblers. Cardinals and mockingbirds weren’t hard to find either. Our most interesting raptor was a Northern Harrier, though I heard reports of both Merlin and Rough-legged Hawk there during the weekend.

While enjoying the warmth of the grand new visitor’s center, we struck up a conversation with a well-informed area birder. He shared information on a few other local hotspots, including Floyd Bennett Field, New York’s first municipal airport, now defunct. This Brooklyn birding hotspot has long intrigued me, but my efforts to spot birds there have, until now, proved fruitless. Once our kind contact mentioned that the new cricket field there was extremely attractive to larks and pipits in winter, I was hooked. Patrick and I motored over to Floyd Bennett in search of a bird that had long bedeviled me.

You’ve got to love it when your target species shows up where it’s supposed to. American Pipits were nowhere to be found, but as soon as we got within sight of the cricket field, we scoped out a grazing flock of Horned Lark. Horned larks are handsome birds, like stout sparrows with black and yellow smiley faces. Despite the bitter cold, I was smiling too; I always do when spying a species for the first time. On that note, we called it a day, leaving the larks and cold-resistant Killdeer behind. A few hours sharing new spots and new species with a great guy like Patrick is what makes birding worthwhile even in winter. 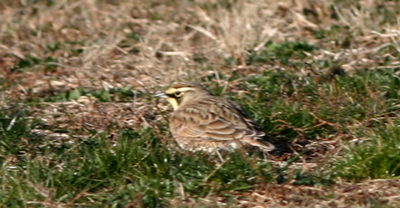