Another stunning group of birds that I really like are the secretive Fruiteaters: these sluggish, quiet, secretive, and beautiful birds form part of the Cotinga family.  These birds, like all the cotingas eat mostly fruit, and are found on fruiting trees and many times along with a feeding flock.  Although I have not seen all of them I have a few very beautiful pictures to share with you.

Starting with the largest of all the: Barred Fruiteater lives on the mid-to-upper levels of the temperate forest between 2500 to 3500 m in the Andes.  This is the only fruiteater that has barring and it uses it for great camouflage among the trees. The picture below was taken at Yanacocha Reserve which lies on the western slope near Quito.

On the west slope of the Andes I have photographed the stunning Orange-breasted Fruiteater at Refugio Paz de las Aves.  This bright colored bird should be easier to spot but he stays still and manages to blend very well with the green leafs and bright colored fruits on some trees.

Further down the western slope at Recinto 23 de Junio, which is the home of the Long-wattled Umbrellabird, there is a conservation story to be told.  I have been visiting this community to see the famous Umbrellabird (Chephalopterus penduliger) and found out that there is a man named Angel Lapo who also believes in conservation.  He is probably the only member of this community who has set aside some 60 hectares of primary forest for conservation.  On my visit to this beautiful forest I photographed a new member of this elite family, the Scaled Fruiteater.  In the picture you can see this bird along with his favorite fruit, which is a seed of some palm tree.   The camouflage is stunning, this bird resembles the habitat in which he feeds.

On the eastern slopes of the Andes I found my first fruit eater at Cordillera de los Guacamayos feeding along with Lacrimose Tanagers and Hooded Tanagers. This bird was only 10 feet away and continued feeding without any regards to my presence and the noise that my camera made as I desperately shot a burst of pictures.

Finally right at the Amazon basin I caught this great picture from the 30 meter observation tower at Jatun Sacha Research Station.  The White-browed Purpletuft also belong to the Fruiteater family and is very difficult to see because he perches and feed mostly on the top of the trees. 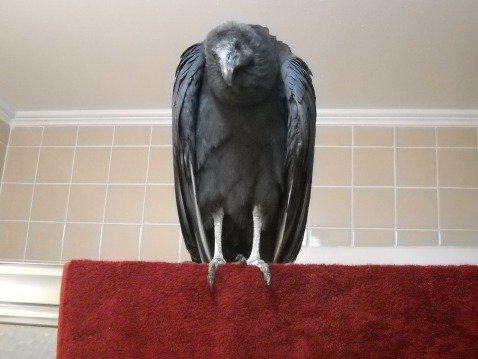