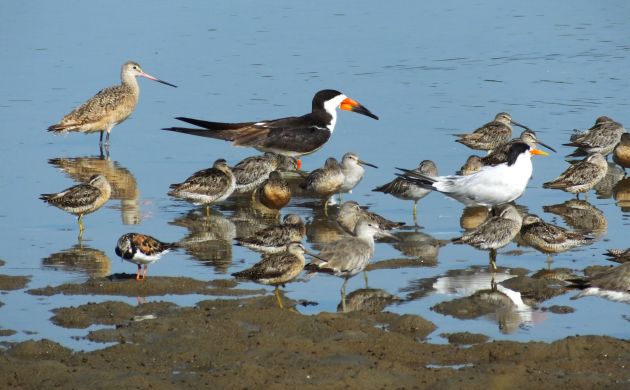 Clear your calendar for September 4-6! That’s when thousands of people worldwide will head out to a beach near them for Global Shorebird Counting. It’s part of World Shorebirds Day (celebrated annually Sep. 6), which raises awareness of the perils threatening shorebirds and the need to protect them and their habitats.

The effort uses eBird to tally the numbers of shorebirds that people spot the world over. Interestingly, citizen science isn’t its primary goal. (Though researchers who mind eBird data will no doubt benefit from these data.) Rather, according to the organizers, “This program aims to give a picture of the power of field work, to help non-counters to improve their counting skills, and to increase the number of counters worldwide.”

I’ve always been intimidated by the idea of counting, so maybe this is a good way to start. (For sure, shorebirds are less likely to hide out in dense foliage, and probably also more stationary, save for the occasional patrolling raptor or off-leash dog.) Will I finally make it to one of the Jersey Shore’s birding meccas in search of Ruddy Turnstones, Red Knots, American Oystercatchers, and tons of plovers and peeps? If I do, I’ll register it here—hopefully you can do the same at your local shorebird hotspot! (Such as Chomes, Costa Rica, photographed above by Patrick O’Donnell)

Follow the Bloggerhead Kingbirds at the Superbowl of Birding

Close to a Record

« Previous post
Where Are You Birding This Second Weekend of August 2015?
Next post »
The slaughter tourism trade in Serbia