You’ve probably heard this tale before. Many a proud birder has made the inevitable pilgrimage to Guatemala to climb a volcano in search of one of the most coveted, not to mention quirky birds in the Americas. Rick Wright has done it. Bill Thompson III has done it. Jeff Bouton has done it. Sharon Stiteler has done it. In fact, an entire Facebook group has organized around surviving what we describe mostly in jest as a death march to see that twisted tree turkey known as the Horned Guan. And I’ve done it too! 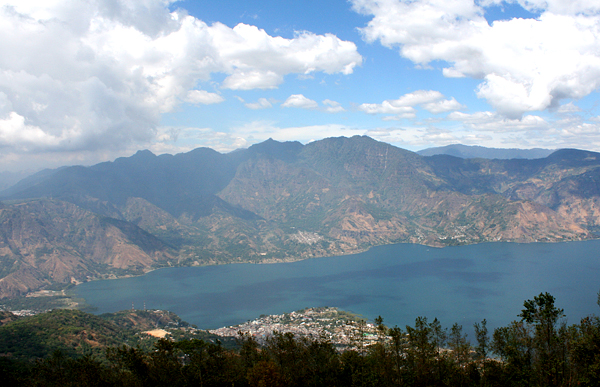 We left Los Andes hours before sunrise in order to arrive at Lago de Atitlán at dawn. A small boat was waiting to ferry us across this exquisite, almost alpine lake. The bird mix betrayed the altitude; instead of jacanas and gallinules, we spied American Coot, Common Moorhen, Laughing Gull, Mangrove and Barn Swallow, Lesser Scaup, and one errant Brown Pelican. Alas, no sign of the Atitlan Grebe!

From San Lucas Toliman to San Pedro La Laguna, the mighty Volcán San Pedro glowered over us. The closer we got, the taller and steeper the silent stratovolcano appeared. But after we transferred from the boat to the bed of yet another pickup truck and arrived at the trailhead, my fantasies of braving the kind of untracked wilderness only birders and other maniacs can appreciate were unceremoniously dashed. Apparently, Lake Atitlan is a major international tourist destination and Volcán San Pedro the hotspot for day hikes. There we were, strapped with expensive optics, a library’s worth of field guides, and provisions for whatever Mother Nature might throw our way, while vacationing European families cheerfully challenged the trail without a shred of khaki or Gore-Tex. Talk about a reality check! San Pedro might not be off the proverbial beaten path but it’s got what it takes to beat people on the path. The trail to the top is dusty and dangerously vertical. Of course, we didn’t realize that at first. The initial leg of the trip was bright and birdy. In no time at all, we’d logged Golden-olive Woodpecker, Dusky-capped Flycatcher, Tropical Kingbird, Bushy-crested Jay, and Black-vented Oriole. We unsuccessfully staked out a stark, rocky cliff for Lesser Roadrunner but took away Yellow-throated Brush Finch, Squirrel Cuckoo, and White-throated Swift as consolation prizes. Then the real work began. I like to tell people that discovering birding killed my hiking career. Never has it felt so true as on San Pedro Volcano. Sara and I used to tackle peaks like this for fun… without the promise of incredibly cool birds. What were we thinking?!? This hike was incontrovertibly grueling. Luckily, it was also gorgeous.

San Pedro stands over 3,000 mighty meters tall. Our quarry was usually found between 2,500 and 2,800 meters. As we climbed, the first band of mountain forest foliage gave way to alders and other high-altitude trees. Brown-backed Solitaires and Clay-colored Thrushes were common companions along the trail, as were the usual warblers: Wilson’s, Townsend’s, Crescent-chested, Black and White, Tennessee, Rufous-capped Warbler, and Slate-throated Redstart. Once the sparse alders gave way to bigger trees like avocado and what I believe were called kanak trees, we were in the zone. First, our leader Hugo had a surprise for us. He ducked off the trail for just a moment then called us all in to get amazing looks at the backsides of two roosting Fulvous Owls. Very special indeed but I would have loved to look one in the eye! Then it was on to the guan. Since I’ve stolen the suspense from this trip report, I should add that we were at the inflection point, that familiar moment when a twitch has the potential to fail in a big way. We’ve all been there before, right? The rarity that you drive four hours to spot or wake up in the middle of the night to see or CLIMB UP A FREAKING CENTRAL AMERICAN VOLCANO to glimpse may not even be there. Sure, the bird was observed earlier in the day but birds have wings which they often use at the most inopportune moments. After ascending thousands of difficult feet, we started to fear that our target might not be found, that we might have to depart the volcano guanless.

When the Horned Guan appeared, those fears dissolved into gasps of amazement. What a bird! 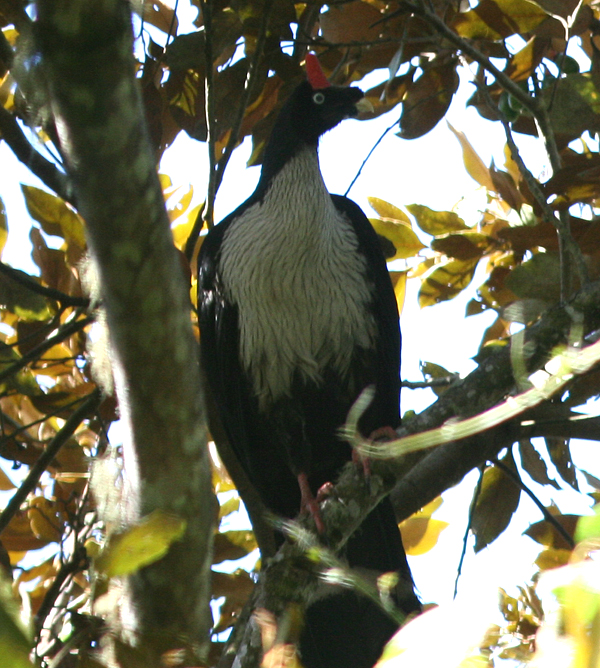 The Horned Guan is an incredible sight, as big as a turkey and black as pitch, brandishing a horn the color of blood. Even more impressive than a single guan is a gang of them. The guan group swelled over the hour or so that we admired these improbable beasts until at least 6 massive birds patrolled the arboreal reaches of a great avocado tree. We oohed, aahed, and snapped hundreds of photos. Words cannot express how relieved and delighted we were to have gotten the guan. As with so many steep trails, the descent can be more perilous than the ascent. Birding took a backseat to staying alive and upright. I’ll never forget, though, how ebullient the mood was and how dark it might have been. I’ll also always remember how amazing our guide was. Hugo Haroldo Enriquez Toledo has shown me a lot of amazing areas and avifauna over the last two years. His skills are unparalleled, his enthusiasm infectious. In fact, when many of my traveling companions were too exhausted to fit in that extra hour of birding before or after a trip, Hugo always grabbed his bins in search of more. And yet San Pedro was his finest hour. That we found our target wasn’t a shock since, in sixteen attempts, Hugo had only gone guanless once. No, I had complete confidence that if anyone could get us on the guan, he could. What was amazing was that he made it at all. Hugo, lugging a scope, bins, and the other accouterments of the bird biologist trade, was in the lead most of the trek. Often, I followed him and noted that as we progressed, he was steadily wheezing and coughing. It turned out that he was in the grip of a rough respiratory bug. Yet despite his evident pain, he not only made the trip but stoically set the pace that dragged the rest of us laggards up the slope. What a stud!

Much of our Guatemala adventure, including the entire Pacific Slope trip, was the handiwork of Operador Latino. Irene Rodriguez, the founder of Operador Latino, is the consummate mother hen, which makes sense since she is a grandmother. At every stage, no matter what snags we encountered, Irene made certain that our trip was as smooth as silk. I can’t imagine I’d have enjoyed Guatemala as much as I did if I hadn’t traveled with Irene and Hugo. When you go after the guan (and you will, won’t you?) be sure to contact Operador Latino. Birding on Steroids or the Kerkini Lake - Greece - in 10 Pictures