I often like to make the joke that Spring in the south lasts about three days, and a good spring is one that falls on a weekend.  Summer, or at least summer weather, comes on fast down here and you expect the residents to be on the ball about prepping the old home for multiple broods.  I’ve seen American Robins and Northern Cardinals and Eastern Bluebirds around carrying nesting material, poking about in hedgerows and nest boxes, and singing from every exposed perch.  Their first brood is probably a couple weeks off still.  But beating everyone to the punch are the little Blue-gray Gnatcatchers, who arrived on the scene not more than a week and a half ago.

While birding this weekend at Mason Farm, I spotted this pair of Gnatcatchers working on their tiny lichen and spiderweb cup in the crook of a broken Black Willow limb.  The nest appeared to be almost complete, weeks before the real rush of neotropic migrants is set to arrive.  Given the impressively brief incubation time of the little birds, there’s a good chance that these Gnatcatchers will be working on brood #2 by the time the last boreal breeders even finish passing through.  This seems to be a pretty accurate time table if the truckloads of Gnatcatchers that inundate us in late May are any indication.  Those birds that  seem to serve little other purpose than to distract me with their best warbler impression. Both individuals were actively involved in the nest-building.  One seemed primarily to be concerned with spider webs which took it across the path into a stand of flowering tulip poplars (spiders no doubt attracted to the bugs visiting the aromatic flowers), while the other picked bits of lichen from the willows near the nest site. The result, nearly complete, was a perfect little cup the precise shade of the surrounding tree, that I never would have noticed had the birds not been focusing like a pair of lasers on this particular nook. 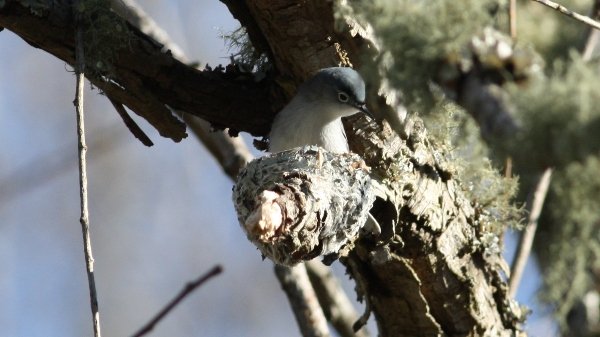 I’ve found Gnatcatcher nests before, generally this time of year as once they settle into the business of incubating eggs these gregarious little birds practically disappear, but as this nest is right along the path at my local patch, I have a feeling I’ll be checking in on a regular basis. 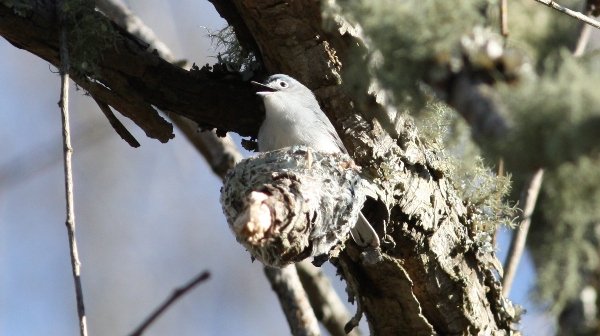 I just hope I’ll make it back before they’re out and gone.