The eastern Gray Squirrel (Sciurus carolinensis) is either a boon for those who consider them cute and like to watch their antics or a bane to those who want just birds to sample their backyard suet and seeds. While at my parents’ house over Christmas I watched the many, many, Gray Squirrels congregating around and squabbling over the backyard suet feeders and spilled sunflower seeds. My parents seem divided on the issue, with my father mostly seeing them as a fluffy-tailed hoard out to deprive the birds of food and him the enjoyment of watching birds and my mother finding the squirrels as enjoyable as the birds. I stay neutral on the issue of squirrels, but I must say that when I stepped out the front door of my parents’ house and watched squirrels coming out of the woods on the other side of the road, across the front yard, and around the house to feast on the bounty my folks provide I started to see them a bit more from my father’s perspective. One or two squirrels around the feeders are nice; 21 squirrels at once (my father’s high count so far this year) are a bit overwhelming.

And it’s not as if they don’t have natural food to eat. The eastern Gray Squirrel

feeds mostly on nuts, flowers and buds of more than 24 species of oaks, 10 species of hickory, pecan, walnut and beech tree species. Maple, mulberry, hackberry, elm, bucky and horse chestnut fruits, seeds, bulbs or flowers are also eaten along with wild cherry, dogwood, hawthorn, black gum, hazelnut, hop hornbeam and gingko tree fruits, seeds, bulbs and/or flowers. The seeds and catkins of gymnosperms such as cedar, hemlock, pine, and spruce are another food source along with a variety of herbaceous plants and fungi. Crops, such as corn and wheat, are eaten, especially in the winter. Insects are eaten in the summer and are probably especially important for juveniles. Cannibalism has been reported, and squirrels may also eat bones, bird eggs and nestlings, and frogs. (source)

Gray Squirrels will go to great lengths for food, as evidenced by this video (that I first saw on The Hawk Owl’s Nest) and the picture below of one carefully getting the last bits of some homemade suet dough. But despite their voracious appetites there is something fun about watching them figure out a new food source, like the giant trapezoid of goodness that was one element of my dad’s bird-feeding friendly Christmas. Whatever it is it smells good… Thank you merciful and generous humans. May I have another?

So, I guess I am still on the fence when it comes to Gray Squirrels. What about you? 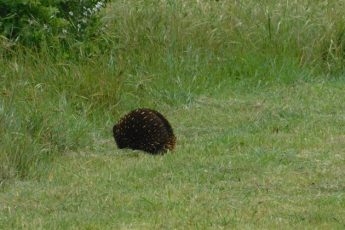