Over the past few months we have been observing our local Pied Oystercatchers attempt to breed along the coastline as we have done for several years now. It is always upsetting to see the loss of eggs or chicks, but due to the longevity of these birds the population does appear stable. There is a variation in environment along the coast and some birds have the dune system to hide their chicks in and others use the reef. The dunes are suitable for hiding in, though once the family move onto the beach to feed once the tide drops they are exposed and the chick can only run to get away from any predation. We have had one success this year of a family using the dune system. The chick is now three months old and it is still with its parents and they are still getting it supplementary food. Although it looks like a full sized bird it cannot quite reach to the depth of its parents in the sand due to its shorter bill.

The other pair of Pied Oystercatchers that had successfully raised a chick last year appear well on their way to doing the same this year. They had attempted to breed earlier this year, but sadly all three chicks were lost to predation by August 22nd. They walk the chicks to the reef within a few days of hatching and this journey takes a few tides to complete because they need to not only plan around the tides, but also traffic on the beach. The walk is about 2 kilometres (1.2 miles) in a straight line, but they don’t go straight! They hide in the dune system as they move south and the parents fly back and forth with food. This pair of birds had laid another two eggs on the 4th and then the 5th of September and then sat for 28 days all over again. They shared the sitting duties and then on 2nd October the eggs hatched. Sadly, as is so often the case, one chick did not make it through the first 48 hours. The long walk was completed and the reef became their home again. The parents spend all year at the reef and only move the 2 kilometres north to breed.

We have observed the family at the reef and the chick is fed constantly until it refuses food. It then goes under a ledge to hide until either the tide comes in or it requires more food. Over our years of observations you do notice that some chicks are a lot more obedient than others. This year the chick has been very obedient and immediately hides when instructed to do so and does not reappear until it is given the “all clear call”. There is a sharp alarm call for danger and once the situation is deemed safe the call becomes a descending note and the chick will reappear from its hiding spot. The sounds are considerably different and through observations and listening you can understand the calls. They will also communicate through head movements and this can also be used to see where the chick is hiding.

On 19th October we observed the chick hiding in the reef after it had chosen not to accept any more food and we took the opportunity to photograph the area it had chosen. It would have to move shortly after due to a rising tide, so we raced in and took some photographs and then left the area to observe once again from a distance. As you can see, it had a great place to hide! On 28th October the family were moving out to feed from an area where they had been during the high tide and it was such a lovely sight to see a young bird that was growing so well. On 5th November we visited to see the family and it was lovely to see a set of footprints that implied they were all out on the reef. To see a set of three pairs of prints is enough to confirm that all is well and when they all look identical you know the chick is growing fast and putting on weight at a tremendous rate. In fact a chick can go from 30 grams to 300 grams in 30 days! We soon discovered the parents were carrying some rather large food items to a certain set of rocks and that the chick was no doubt under them. Our route back to the road would take us that way and so we took a few photos as we went by. The parents tried to distract us by going the other way, which is typical in most shorebirds. The chick had a good spot to hide in and you may need to scroll down and back up again to see where it is! Only a few days later and the chick no longer has grey feathers, but is going black like its parents. It is almost flying and will stay in the area for a few months before it moves to a non-breeding flock to the south.

Champions of the Flyway - the Dakar Rally of Birding 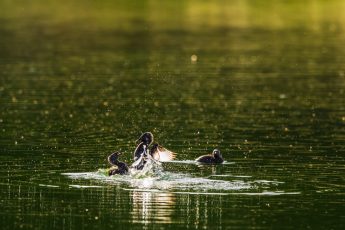