We humans have a very deep and powerful urge to assemble individual data points into some sort of larger construct — to label and categorize them and understand how they relate to other things we know. Which is why, upon meeting new people, we want to know where they’re from, who their family is, what they “do,” or two or three other things, depending upon our cultural values. And which is also why it’s virtually impossible to find a description of the spectacular South American Hoatzin (Opisthocomus hoazin) that doesn’t in the first breath mention the bird’s highly enigmatic taxonomic status. A Hoatzin in Peru, spectacularly depicted in this image by Carine06.

The Hoatzin was described initially as a pheasant. We now know that it lies within the Neoaves, not within the waterfowl-gamebird clade Galloanserae, but where in Neoaves is still very unresolved. It’s been placed near cuckoos, turacos, seriemas, pigeons, and various other orders, but never with strong support or any legitimate confidence.

It’s a weird and wonderful bird — a folivore with a highly modified crop to assist in the digestion of vegetation — and there’s much that can be said about it, but its remarkable ability to defy classification is usually what gets top billing.

Well, a new paper by Gerald Mayr et al. describes two fossil hoatzins, one of which, Namibiavis senutae, was originally described as a crane-like gruiform but which, Mayr and his colleagues argue, is in fact a hoatzin. From Namibia. In Africa.

Suddenly, hoatzins are no longer strictly birds of the Neotropics. They once had, if Mayr and his colleagues are correct, a presence in the Old World too. And Mayr et al. go on to say that they believe the birds colonized South America from Africa and suggest that the most plausible explanation for this is that the birds traveled west across the Atlantic on “rafts” — huge floating tangles of debris often invoked to explain trans-Atlantic mammal dispersal events.

I have to admit, the idea of a gaggle (Gaggle? We’ll go with gaggle.) or two of ancestral hoatzins floating across the Atlantic, contentedly munching leaves as they went, perhaps toughing out a storm, and eventually clambering up some bright morning into strange trees on a vast new continent as if nothing remarkable at all had occurred is quite a compelling one.

Of course, none of this solves the taxonomy and systematics problems we face with the modern-day Hoatzin. But an out-of-Africa hypothesis certainly gives us more to ponder as we regard possible relationships with the African turacos and other clades.

The amazingly prolific and always thorough Darren Naish at Tetrapod Zoology covered the story when it broke last week, and I recommend his post if you’d like to explore this story further (which of course you do!): Hoatzins are no longer exclusively South American and once crossed an ocean. Dr. Mayr’s institution also put out a press release with an overview of the paper. 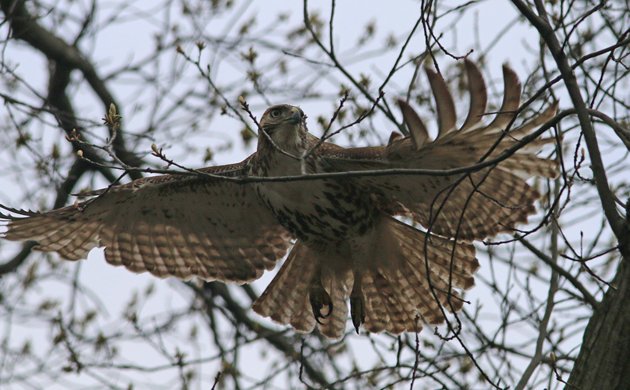