Last week, I shared with you some photos of Blue-black Grassquits, doing their jump-song routine. Those photos were from a trip to Paso Ancho, my nearest site fully within Mexico’s Tierra Caliente (“Hot Country”).

The reason for said trip was to see if I could catch some Sinaloa Martins on their way south to their unknown wintering grounds. This species is rare, hardly ever observed, and severely understudied. EBird, for example, has a total of only 134 observations recorded (5 of them mine), and has only received 9 lists with photos of the species (4 of them mine). And yes, you read correctly: Nobody knows where the Sinaloa Martin spends the winter. But it definitely spends time in Paso Ancho, on its way to wherever.

Success! This one is a female, although there was more than one male present in the group of some 10 that I saw.

For the most part, the rest of the day was unspectacular. For example, I did not see any of the gorgeous Orange-breasted Buntings common in the area. But my encounter with a Green Heron by the river was worth documenting here. Their necks must be like those retractable garden hoses they sell on TV! 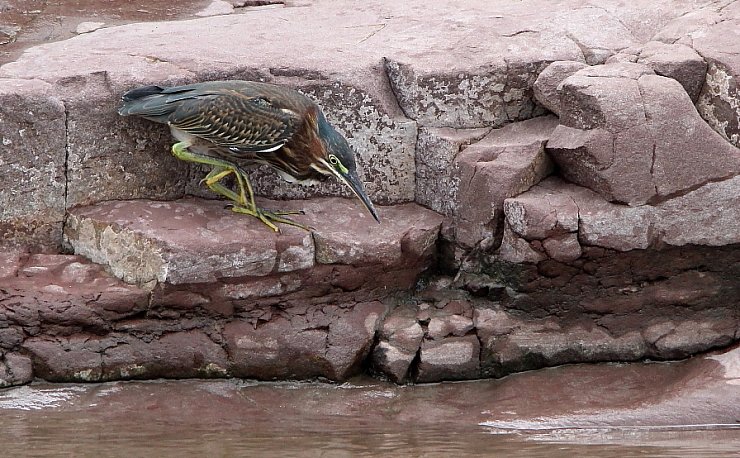 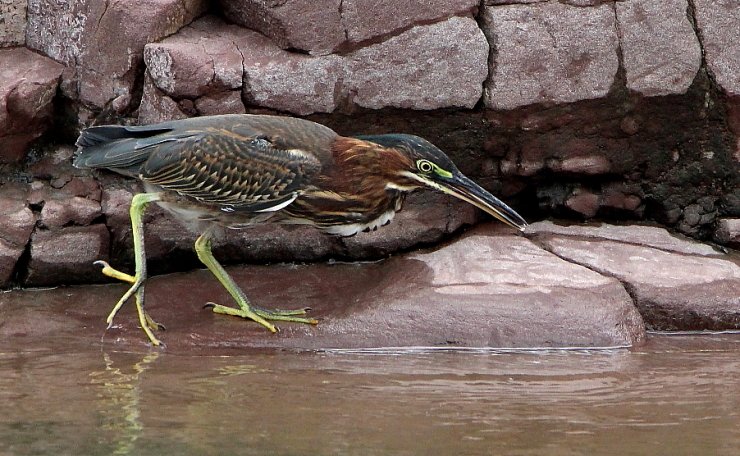 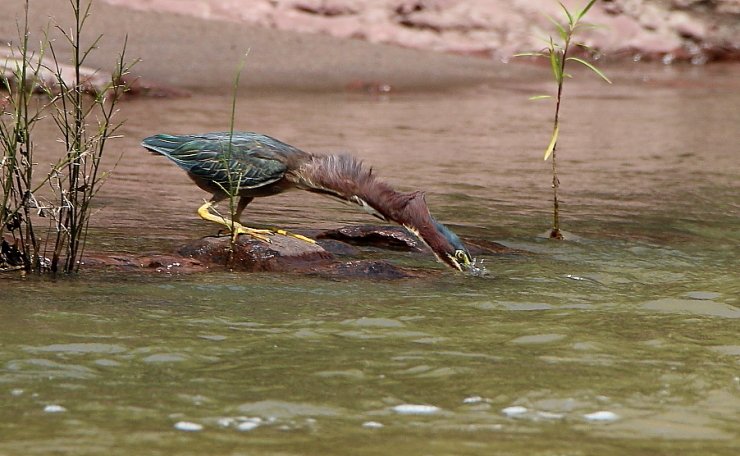 Where did THAT come from? 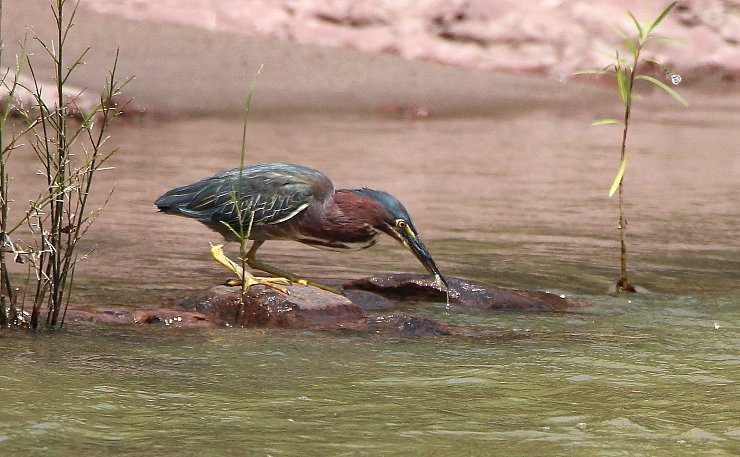 Back to a (satisfied) normal.

It was also a pleasure to get a picture of a Laughing Falcon, although from quite a distance. One more species to add to my list of Birds That Look Like Muppets. Click on this Xeno-canto link, or check the Merlin app, for recordings of the species’ call, if you want to know where it got its well-deserved name. 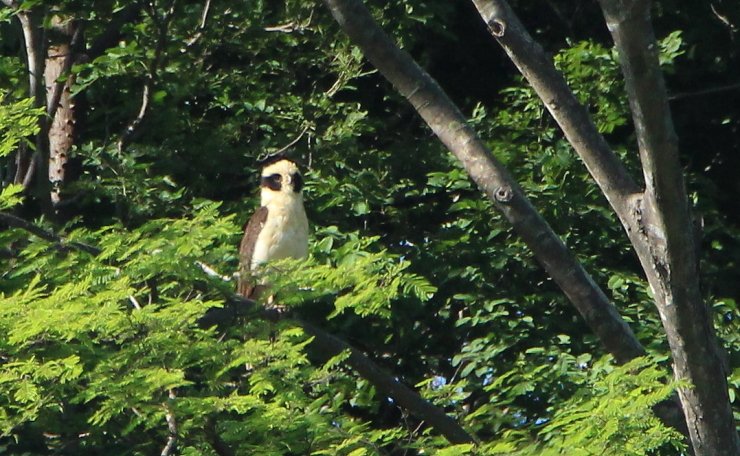 The following Monday, I went back to the area around the towns of La Escalera, El Palmar and Ajúmbaro, on the border between the Hot Country lowlands and our highland pine-oak forests. One of the pleasures of this site, which I am still getting to know, is an abundance of Lesser Roadrunners, a species I had only seen once elsewhere.  In contrast, I have seen it on 3 of my 4 trips to this new area, each time at a different site. This visit, for the first time, I saw a pair. 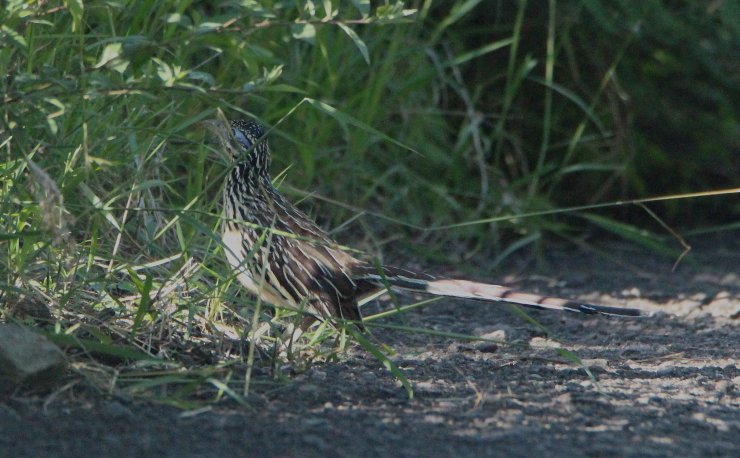 Unlike their Greater cousins, Lesser Roadrunners like to skulk in semi-tropical underbrush, rather than running along open desert lands.

Your eyes do not deceive you; the woodpecker is significantly larger than the owl.

My main goal for this trip was to see if I could once again see the male Sparkling-tailed Hummingbird I had located on the outskirts of El Palmar during my previous visit. Unfortunately, he was not to be found. The Roadrunners had turned up on my way to that spot, however, so I couldn’t be too unhappy.

I left El Palmar, and headed down the road to Ajúmbaro to see what might turn up. (Which included the Pygmy-Owl above, and the colorful lizard at the head of this post.) I was thinking about calling it a day, but still had about half an hour on my allotted time, so I started walking up the dirt road from a stream I usually check out. There was a 10-foot embankment on my left, and when I glanced at a small, scrubby tree above it… There was a male Sparkling-tailed Hummingbird! I took photo after photo while he patiently posed, as I tried to get the best possible focus and exposure, when suddenly, I realized a female had joined him on the same tree. See if you can locate them both in the third photo. (Sparkling-tailed Hummingbirds are only 2.7 inches/7 cm long, plus an additional inch of tail on the males, so look hard.)

I know they make the tree look big. But, believe me, it was not.

Which just goes to show that the Hot Country can be really, really cool. 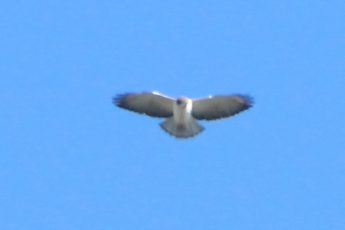 « Previous post
Bird Families of the World by Winkler, Billerman and Lovette
Next post »
Best Bird of the Weekend (Fourth of August 2020)