Normally wildlife rehabilitators try not to give these kinds of directions. We say things like, “Just pick him up and put him back in his nest,” or “Leave him alone, the parents are around.” But occasionally it’s clear that something has happened to the parents, or the whole tree has been cut down and there are no alternatives, or the birds had the bad luck to be born in an area where one or more idiotic, soulless humans let their cats roam around outside. In any of these cases, it’s a ride to the rehabilitator or else.

So we say things like this: “Get a small box. Take a towel and twist it, then shape it into a doughnut and put it on the bottom of the box. Put some Kleenex in the middle, so it looks like a nest. Put the baby birds in the nest. If the box is too big, pad the area around the nest with either cotton or paper towels. You can loosely tape the top of the box, as long as you make sure there are air holes in it.”

Not too hard, right? You don’t have to follow the directions slavishly, you can substitute a T-shirt for the towels, etc. You know, improvise a bit.

Maureen Eiger, a rehabber friend, sent me this photo. She had given the above directions to a person who had found two nestling Northern Mockingbirds in need of immediate rescue. The person did some improvising, and substituted a bucket for the nest, and two giant slabs of concrete for the paper towels.

We  salute the good Samaritan who went out of his/her way to help the babies, and we thank the Nature Gods that there were no bumps, potholes, or hairpin turns en route to the rehabber. 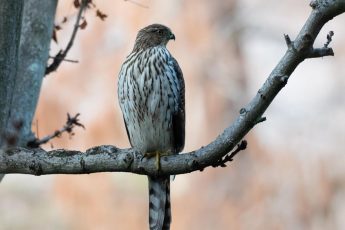 « Previous post
Inside a Bald Eagle’s Nest: A Photographic Journey through the American Bald Eagle Nesting Season
Next post »
Where Are You Birding This Third Weekend of January 2014?