My wife and I recently welcomed a second child into the world, so much of my birding has been of the theoretical nature of late. However, this past weekend I was able to get out for a couple hours to take in a phenomenon that birders in North Carolina have rarely seen of late.

The Poler Vortex that has sunk much of the North American continent into the deep freeze has had an effect on us on the margins as well. Several days of sub-freezing temperatures have frozen over the lakes in my hometown of Greensboro, North Carolina, making for phenomenal duck watching for those willing to brave the weather. Unfortunately, with a new baby on my plate, this once in a decade waterfowl show has been difficult for me to partake in, but with family in town I was able to slip out and run the “lake loop”, a short route that takes me to the three largest bodies of water in the county. Unfortunately, the cold snap had itself snapped, and the air temperature was a balmy 60 degree F, making for the unusual incidence of a nearly iced over body of water that required only a light jacket to enjoy. The ducks were still concentrated in the, ever increasing, pockets of open water as if it were much colder.

This, friends, is what is known as the best of both worlds. Several diving ducks were ticked into an open patch of water right near the shore. The majority of them were Buffleheads and Ruddy Ducks, but Hooded Mergansers floated against the back edge, nervously watching the fishermen and the one lanky dude with the scope aimed their direction. A hole in the ice farther towards the middle was entirely packed full of Pied-billed Grebes, and a number of more wary ducks, including American Wigeon, American Black Duck, and Greater Scaup (a county bird!) occupied an open spot against the shore on a far arm. If this sounds like a pretty pedestrian outing farther north, than you’re probably right. I don’t know if I can adequately construe the novelty of all this. Regular “ducking” (not a word, but it should be) anywhere in the south in winter can be a difficult thing. There’s a lot of water here, and the birds tend to be spread out over acres of farm ponds and reservoirs. It’s hard to get a full accounting, and even harder to find anything locally rare. But when all the birds are concentrated in these little open patches of water in the midst of ice, it’s like Christmas. If what you asked for were ducks.

The gulls seemed to enjoy the novelty too. They clustered around the diving ducks, ready to pounce on anything they pulled out of the water. A flock of Ring-billed Gulls was paying particularly close attention to a small squadron of Hooded Mergansers, whose tiny fish were continually poached by the screaming hordes. Great Blue Herons stood on the ice at various spots on the lake too, but these are bigger birds, and the ice was becoming thinner and thinner every moment. I watched more than once as a Great Blue Heron fell through the ice unexpectedly, or landed near the edge of an opening only to find its firm footing shatter beneath its feet. Turns out I wasn’t the only one having trouble dealing with the unusual weather. Oh well, at least the air temperature was pleasant.

By now the ice has mostly melted off the lakes, scattering the ducks back among their various farm ponds and side arms. We may never see another opportunity to witness this sort of phenonmenon for several years in North Carolina. A shame, too. The crutch of an iced over lake is a novel thing down here.

Not novel enough for me to move north, but nice enough for once in a while. 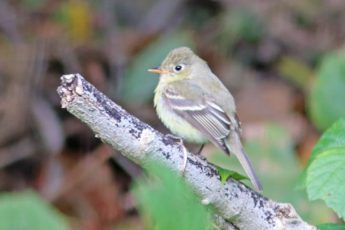 The Things We Do For Birds

« Previous post
Snowy Owls Caught a Ride to the Netherlands
Next post »
Charles Harper’s Birds & Words: A Review of a Classic Reborn