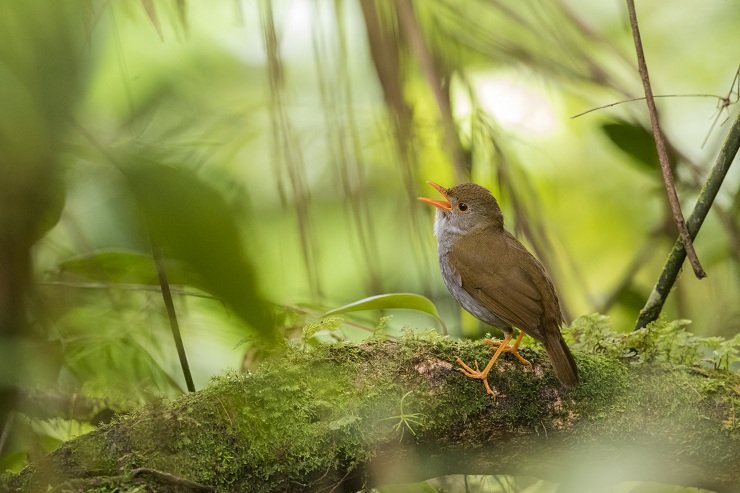 Trinidad’s cloud forests typically aren’t birded much. After all, the habitat is restricted to the highest and mostly inaccessible reaches of the mountain range across the north of the island. These magical forests hide isolated treasures like the critically endangered Golden Tree Frog – not to mention several species of birds not found anywhere else in the country.

Due to the infrequency of birders’ observations, birding the cloud forest is rife with legends; stories of fantastical sightings of mystical species such as White Bellbirds and Golden-rumped Euphonias course through the lips of any veteran birder hearing of your intent to ascend further than 800m. Last weekend I accompanied a small group of intrepid birders to El Cerro del Aripo, the tallest peak on the island at about 940m.

We turned off the main road and began ascending a crudely paved road while it was still rather dark. This road eventually gave way to dirt, stone and crevasse and I was forced to ditch my car and hitch a ride on a 4×4. Not for long though, as the walking began shortly thereafter.

Our first birds for the trip were vocalizing Trinidad Euphonias and an inquisitive Rufous-breasted Hermit. The former would remain unseen while the latter was surprisingly confiding. A lone Blue-headed Parrot circled overhead, eventually coming to rest on a patch of scraggly bamboo in the distance. A productive morning, I thought. Still, I kept my camera tucked away, apprehensive about the requirements of the impending climb. But when we stumbled upon a small group of Red-crowned Ant-Tanagers I swiftly changed my tactics and opted for the camera-in-hand approach. Although the ant-tanagers (which aren’t true tanagers anyway) had disappeared by the time I got my gear out, now I was ready.

Flycatchers are some of the kindest birds to photograph, this Euler’s Flycatcher helped me test my camera settings.

It has been some time since I went trekking through the forest and I was making sure to keep my eyes on the ground. Thus unwittingly flushed a Chestnut Woodpecker that was stationed on a liana-covered tree immediately next to the path. Another Rufous-breasted Hermit darted across in front of us.

After about an hour and a half of a gentle incline, we arrived at a junction in the forest where we opted to pause and refuel. Our intended path from here onward would take us on a steep ascent, and maintaining a climbing rhythm is just as necessary as breathing itself. Some members of the group attempted to coax a nearby Little Tinamou from its cover with (predictably) no success. As I surveyed the surrounding forest my eyes fell on a familiar shape – a Green Hermit.

This Green Hermit proved to be the most accommodating member of its species I have ever encountered.

With a final swig of water we commenced the real climb. Thighs burned as White-necked Thrushes sang and Bearded Bellbirds bonked. The air was cool and moist, and at this point I began to notice the moss and lichen on nearly every branch. Even saplings were sporting patches of moss – materializing cool mountain water from the thin air.

This portion of the ascent was grueling, I know we passed more than a few groups of hyperactive Golden-headed Manakins but couldn’t muster the energy to begin searching for the tiny birds within the branches. Even the distinctive bleating of a nearby Ornate Hawk-Eagle only got us to pause briefly. The aim was to go directly to the fourth (of seven) peaks without stopping. This would put us at around 820m (2,700′) elevation, comfortably into cloud forest.

I wasn’t actively checking the time, but I knew when we were nearing our destination because the sweet song of the Orange-billed Nightingale-Thrush started to permeate the soundscape. It took me some time to find one – but if I hadn’t already fallen in love with its melodious voice I definitely was smitten when I laid eyes on it for the very first time.

As the other members of the group dispersed in the pursuit of better looks at (supposedly) better birds, I began to utilize my tried-and-tested technique of the sit. Wherever I go birding, I enjoy some level of stillness – to allow my senses to fill themselves with what surrounds me. Bananaquits chattered and White-bellied Antbirds called incessantly to each other amidst the almost constant soundtrack of a few Orange-billed Nightingale-Thrushes. Suddenly, two birds flew in directly overhead where I was, their eager twittering was completely unfamiliar to me. Oh – did I mention that I had forgotten my binoculars at home? Yeah, that realization occurred when I was already about half hour away from home, sometime around 4am. Anyway, I noticed that these birds looked like abnormally large Palm Tanagers as they moved around the branches. I scrambled up the hill for a better view, as one of them hopped onto a fruiting palm. I blindly fired off a few shots into the blinding white sky – to my delight what I saw through my camera confirmed my bubbling expectations and lifer #2 of the morning: a pair of Blue-capped Tanagers.

The Blue-capped Tanagers were gone by the time others returned, but now there was a determination among the group to remain in one spot should the tanagers revisit the palm. Fortunately, they did – and many eyes feasted upon the high elevation specialists.

This White-bellied Antbird popped up closer to me than I was expecting.

There were a few other species around, Bay-headed Tanagers and Purple Honeycreepers were both sighted as they made their way along their feeding circuit. I spied a couple Yellow-legged Thrushes bickering on a distant tree. For the most part however, the Orange-billed Nightingale-Thrushes stole the show.

This male Yellow-legged Thrush surprised us with an eye-level appearance. Although this species is found on both Trinidad and Tobago, visibly distinct races occur on each island. On Tobago, Yellow-legged Thrushes are all black except for their legs, bill and eye-ring.

Finally, it was time for the dreaded descent. All gear was secured to allow freedom of all limbs. Just about three hours later, we were back at the vehicles – spent yet exuberant. 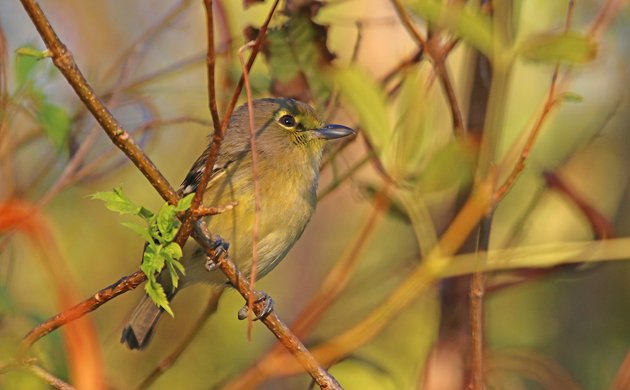 Best Bird of the Weekend (Last of February 2017) 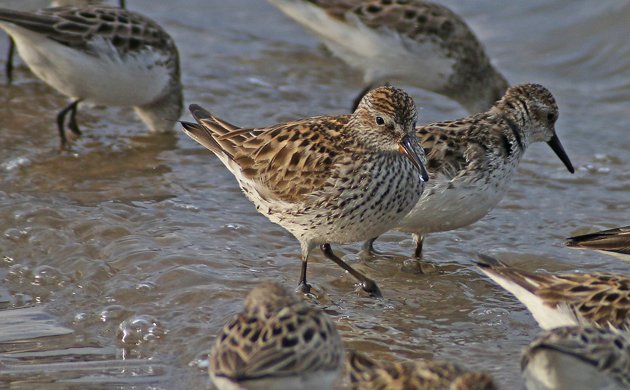