One thing that I like about this time of year is bugs.  Sure, migration is over and the hordes of wood-warblers are busy breeding further north but bugs, well, bugs are everywhere, and they tend to be easy to photograph, that is, if you don’t mind photographing whatever bug it is you happen to come across.  The hard part is figuring out what exactly those six-legged creatures are that you are busy photographing.  The sheer variety of species, from butterflies to beetles to mantises and leafhoppers is astounding.  The pictures below are of two types of bug that I have managed to identify, at least to their family (hopefully, I managed to identify them correctly!).

The first bug I’ll be sharing today is, as best I can figure out using Kenn Kaufman’s Field Guide to Insects of North America, a member of the family Cantharidae, or soldier beetles.  To be more exact, I believe that it may be one of the nineteen North American members of the genus Chauliognathus, which are described by Kauffman as “valuable pollinators and agents of pest control.”  However, Kauffman also points out that “Adults can be confused with many other kinds of beetles” so I may be way off the mark here.  Anyway, when Mike and Frank and I went to Suffolk County I found a pair of these beetles busy making more beetles, at least, I think that is what they were doing.  Who can really tell what bugs are up to?

As you can see, the beetles were busy collecting pollen and were liberally coated with it, that is, when they weren’t busy doing other things…

The next insect I am much more sure about.  It is a member of the the family Dolichopoddae, or long-legged flies.  Kauffman says that this family includes “the small metallic green, blue, copper, or bronze flies seen darting across leaves.  And seeing as I encountered many of these flies darting across large milkweed leaves at Jamaica Bay, I assume that I have identified this fly to family rather accurately. What’s that you say? You want a closer look?

Anyway, I highly recommend getting out there and looking at bugs when you can’t find birds.  You’l learn a lot and see some pretty cool creatures.  And if anyone would like to confirm or correct my identitification attempts in the comments, well, I would appreciate it! 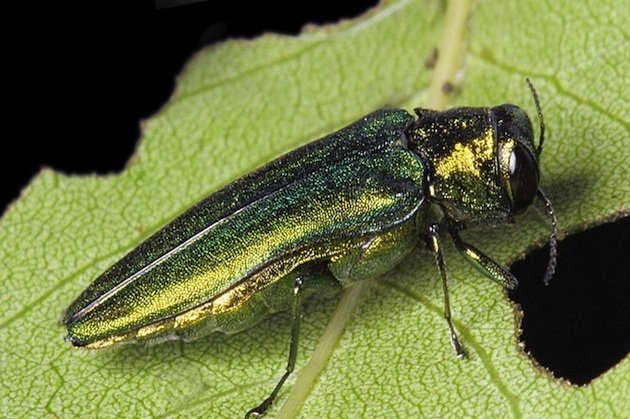