September 29, 2021 by Faraaz Abdool No Comments 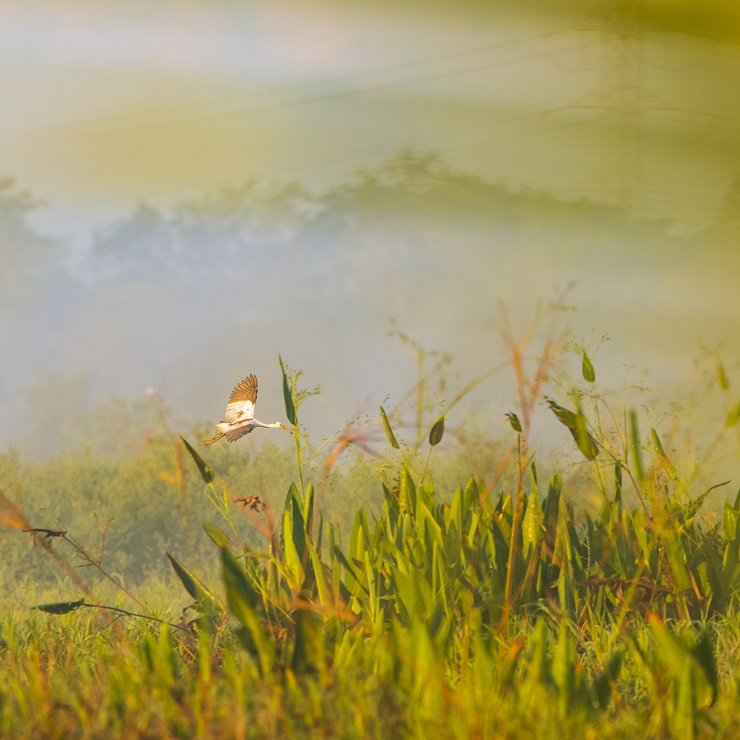 Conceptualizing a plumage aberration such as leucism, where pigments are prevented from reaching some (or all) feathers (in the case of birds) may be a feat of the imagination that can most easily be applied to one of the more common species – maybe an American Robin, or a Rufous-bellied Thrush. Personally, I’ve seen leucistic hummingbirds more than anything else – I photographed a completely leucistic Black-throated Mango many years ago on Tobago, and more recently I’ve noticed a few Carib Grackles with the odd white feather.

A few days ago I was out birding at a nearby wetland in southern Trinidad with a close friend of mine. The sun had just come up and a thick mist still enveloped most of the surrounding marsh. Coming in from the east at a considerable distance was a strange looking bird. I pointed my camera and fired a few shots off before it disappeared into the reeds. Initially I thought it was a Wood Stork but once I peered through my viewfinder and noted the distinctive flight pattern I realized that it was none other than a partially leucistic Limpkin.

A partially leucistic Limpkin I photographed a few days ago, about to disappear into the dense wetland vegetation. After scouring this location for many years, I finally laid eyes on this mythical beast.

Not that I was disappointed with it being a Limpkin, of course the much rarer stork would’ve necessitated a rare bird report but this distinctive bird was something I had been hoping to see for many years. I can’t recall the first time it was spotted, but it has been visible in the same area since at least 2016. Other birders have seen it several times, and many have gotten much better views than I got. Nevertheless, I am still thankful for the fleeting glimpse I was granted! It turns out that leucistic Limpkins are much rarer than Wood Storks anyway, the first official report I found was of a single bird in Paraguay in 2006. Apart from that, I haven’t managed to find any other notable record of leucism in this species – if anyone has any leads, please post links in the comments!