I’ve spent a fair bit of time on the ocean on right side of North America. Not as much as many others, certainly, but enough that the birds of the Gulf Stream and pelagic “culture”, for lack of better word, are familiar to me. Birding the Gulf Stream requires patience. It requires long stretches of bird scarcity. It rewards birders who improve their ability to find and identify birds at the horizon, at the margins of vision, because often times those are the birds that you want to see. It’s often very hot on the Gulf Stream whose water is a bathtub-like 80+ degrees, and you need to get very familiar with Wilson’s Storm-Petrels.

I have more or less internalized this style of birding over the course of many boat trips. I like it very much. But before this month I had never been birding off the Pacific Coast, where the water and air are cooler and the birds are always around you. Where the skilled spotter finds needles in haystacks and picks out rarities from more plentiful species. This month I was in San Diego, helping out with and participating in the American Birding Association’s San Diego rally. Having never birded west of Arizona, there were many bird experiences I was looking forward to, but chief among those was the opportunity to get offshore aboard the Grande to see what was hiding beyond that blue horizon.

Turns out, it’s a lot of Black-vented Shearwaters. The sea was calm all day, with patchy fog in the morning adding a chill to the air that I wasn’t familiar with. For most of the morning the birds appeared out of the fog like ghostly apparitions, making a quick pass and disappearing. You not only had to have a quick trigger with your IDs. Most of the birds were Pink-footed Shearwaters, with the odd Northern Fulmar or Sooty Shearwater mixed in, but I missed a South Polar Skua because I was on the wrong side of the boat. It’s pass was brief and fortunate only for those few who happened to be in the right place at the right time. Dozens of Cassin’s Auklets flushed from the front of the boat as we steamed out past the seafloor features that mark the birding spots in the Pacific. We never got a great look at them, and they existed only as small dark birds with white bellies moving quickly in tight clusters towards the horizons. No one gave them much thought except to determine that they weren’t the black and white auks, which are the desirable ones out there.

It wasn’t long before the call went up. A pair of little murres were spotted sitting on the water and the boat crept forward, situating itself between the birds and the sun such that we got incredible looks at a pair of Craveri’s Murrelets that wouldn’t even flush as we drifted along together for a few minutes. These birds nest in Baja California, and drift up into US waters occasionally in the late summer. They’re not expected by any means, but this had been a good year for them and they were on the short list of species we were looking hard for. It was nice to get such long, satisfying looks.

When we motored into Los Angeles County waters to pick up the many thousand strong flock of storm-petrels milling about. This is where west coast pelagic birders would shine. Most of the flock was Black Strom-Petrels and the rest were tiny Least Storm-Petrels. We were told to look for the slightly longer tailed Ashy or anything with a white rump, but the storm-petrel beehive was more than a little overwhelming. Someone would call out a bird and no one would be able to refind it. So it goes on the west coast. We could have used a few more eyes.

But it wasn’t just the seabirds that induced appropriate awe. I’ve seen landbirds from time to time off the Atlantic coast, but nothing could prepare me for the number of unexpected sightings 30 miles from the California shore.

Highlights from the boat ride include Short-eared Owl (apparently heading to the mainland from San Clemente Island), a hummingbird species, some type of sparrow (consensus seemed to head towards Spizella but no one saw it well, and a Spotted Towhee, quite possibly a lifer for as many in our east-coast heavy group as any of the seabirds. The day ended with multiple lifers for many, as well any good pelagic should. I can’t wait til my next one. 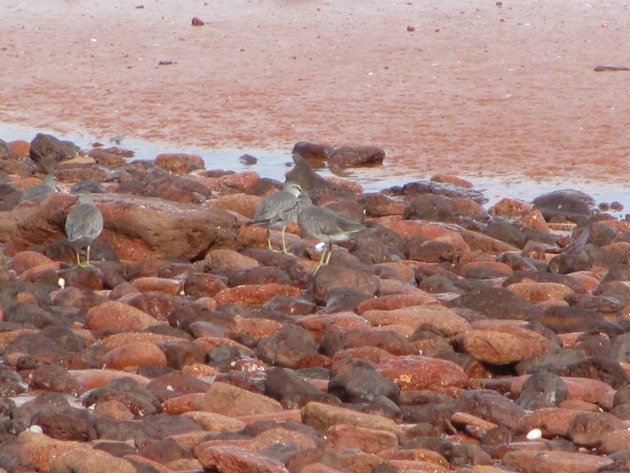 Best Bird of the Weekend (Last of November 2009)

« Previous post
How to separate Westland and White-chinned Petrels
Next post »
The First Ever Diabolical Sparrow Quiz!