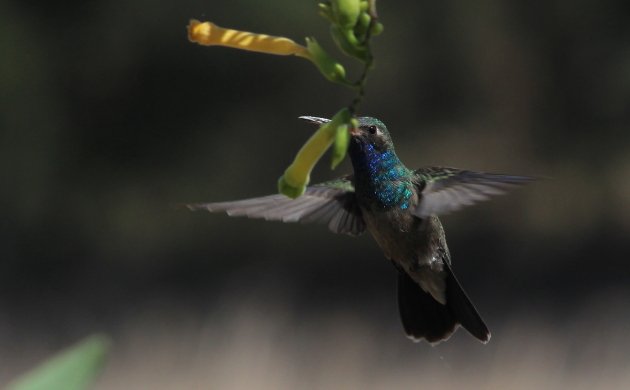 I was born in Minnesota. Had my life taken a different turn, and had I remained in that state, I would be intimately acquainted with exactly one hummingbird: the Ruby-throated Hummingbird. But my family moved to northern California when I was four years old, in 1962, effectively quadrupling my hummer list with the addition of the Anna’s, Rufous, and Allen’s Hummingbirds.

And so would the situation have remained, except that I moved to Morelia, Mexico in 1994. (I will pass over my years in Mexicali, the desert city that made me forget about birding for many years.) Here in Morelia, it seems laughable that I once only had access to less species than I could count on one hand. While they are only a fraction of the 359 hummingbird species in the world, I have seen fully 20 of these within an hour of my current home. And I can see entirely different sets of these, simply by driving a half hour, from one site to another. 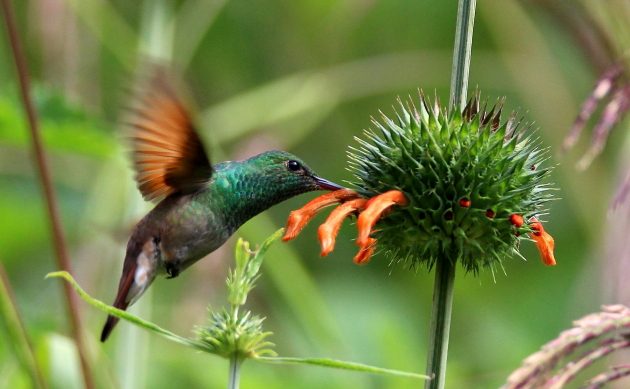 This one is a Berylline. 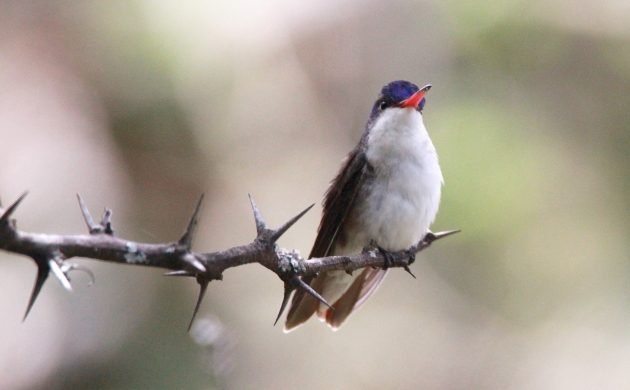 While this, obviously, is a Violet-crowned. 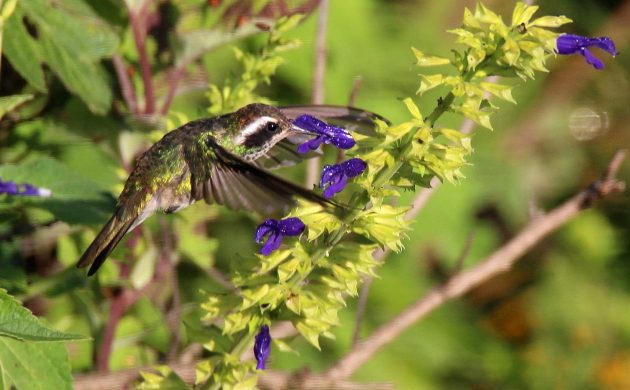 And you can’t miss the White Ear on this female.

When I travel to the coniferous forests of our highest altitudes, the Rivoli’s moves to the forefront, along with the Blue-throated Mountaingem, and, just once so far, its close cousin, the Amethyst Mountaingem. The Broad-tailed is also possible there, as well as a very occasional Bumblebee. 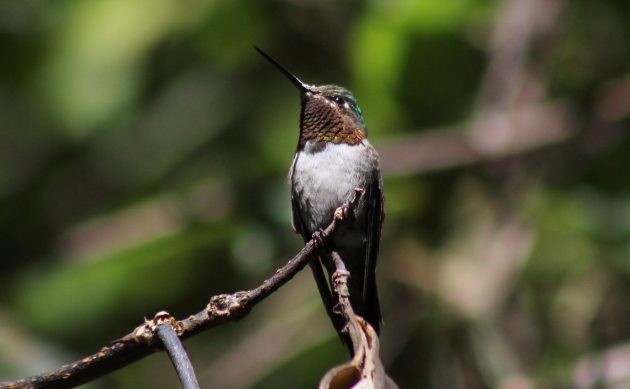 But things get really interesting when I go down to the tropical scrub of the Tierra Caliente. The presence of hummingbirds is much more variable there than elsewhere, apparently because there are fewer year-round nectar sources. But when the season is right, I will certainly see lots of Lucifer Hummingbirds, Broad-billed Hummingbirds, and the similar but paler endemic Dusky Hummingbirds. And it always thrills me to see the long forked tail of the Golden-crowned Emerald, or the Plain-capped Starthroat‘s almost comically long bill. I’m still determining how common the Cinnamon Hummingbird is there, but I do know they are abundant in my state’s coastal region. 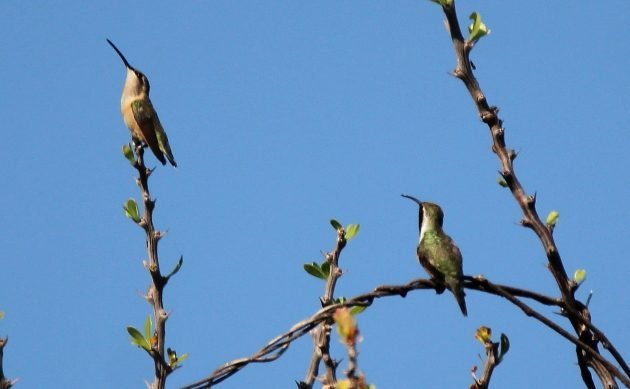 Even Lucifer has his mate! 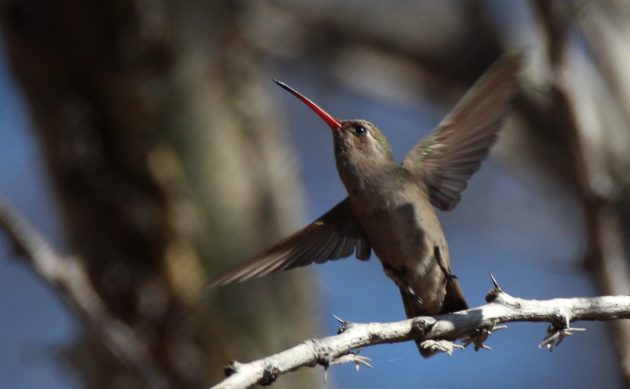 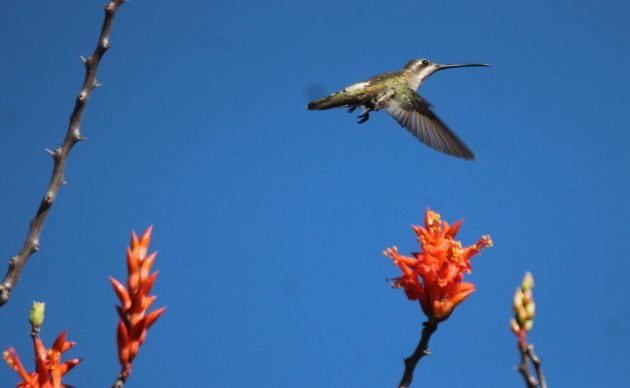 Do I miss the hummingbirds I used to see in my younger years? Why would I? Just last week, a Ruby-throated Hummingbird stopped to sample the cutting-grown native salvias and penstemons in my garden, on its way to its coastal wintering grounds. And while the Black-billed and Calliope Hummingbirds are very difficult sightings in my region, it would be a sad winter indeed if I didn’t see several of the Rufous and Allen’s Hummingbirds of my youth. 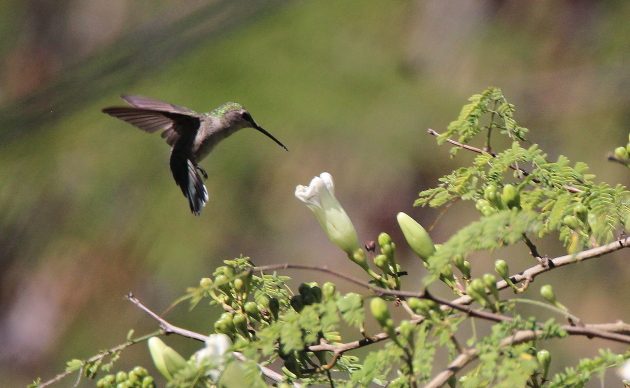 Migratory Ruby-throated Hummingbirds can be seen at 10,000 feet among fir trees, or at 3,000 feet on tropical thorn-forest vegetation. This one was on the latter.  Alas, we mostly get females; the males winter along the coast. 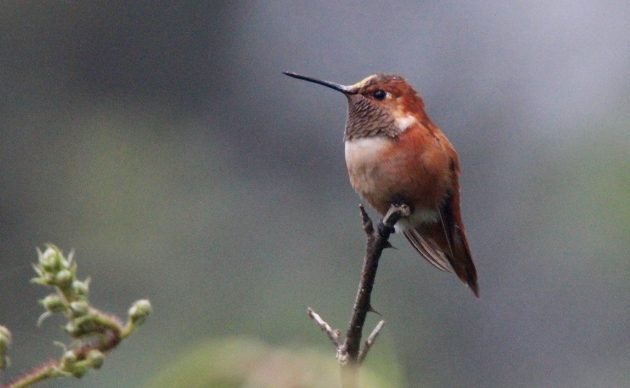 So, if you like hummingbirds — and, come on, who doesn’t? — you might want to try going south of the border. You won’t be sorry.