Seth Ausubel is one of the best birders in Queens, New York, and Corey is ever-so-thankful that Seth does not use eBird because that way Corey can pretend that he is the top lister in the borough.  Seth is generous with his knowledge, and, knowing this, Corey cajoled him into providing this post about one of the many avian mysteries of New York City.  All text and photos in this post are copyrighted and used with permission.  Enjoy!

One of the least known stories of New York birding is the tale of the wild Mitred Parakeets. While many birders are familiar with the local Monk Parakeets whose large stick nests are found throughout the metropolitan area, the Mitred Parakeets are largely a mystery. But in fact they have been with us for more than 25 years, and each spring for the past decade or more, like clockwork, they show up on one block in Hillcrest, Queens to feed on the blossoms of two ornamental cherry trees. I have been observing them there and at few other lucky locations for the past few years. What, you may ask? There is a population of large green and red parrots in New York City? How did they get there? How do they survive the winter? How many are there? Are they breeding? Are they “countable”? I investigated these questions and I have some, but certainly not all the answers.

Mitred Parakeets have been seen in New York since at least 1984, mostly in southwestern Nassau County and Queens. Mitred Parakeets are popular pets, commonly known as Mitred Conures. During the 1980s, over 140,000 were imported to the U.S. from South America. JFK Airport was a major hub for the importation of wildlife for the pet trade, and it is likely that birds escaped from quarantine during this period. The population may also be supplemented by releases of pet birds. Miami and Los Angeles were also major importation hubs, and populations of Aratinga mitrata are well established in those areas.

Mitred Parakeets are native to southwestern South America. They are a temperate zone species, found at high elevations, so they are somewhat cold-adapted. In winter, they gather in flocks to feed on patchy seasonal crops. They maintain this pattern in New York. Virtually all of the sightings are between December and May. They feed on a variety of native and ornamental tree fruits and seeds. Many sightings have been on extremely cold winter days. It is possible that in the worst conditions they seek warm, man-made microhabitats, of which there are plenty in urban areas.

The flock sighted around Queens over the past several years has 12-17 birds. Reports in 2009 from Nassau County may put the total number of birds as high as 50. Older reports seem to indicate at least that many if not more birds. So while surviving, the population does not appear to be thriving. An interesting point is that some experts believe that the orange and yellow feathering on many of the New York birds, like the one below, is due to inbreeding or an avicultural morph.

But the greatest mystery of the Mitred Parakeets of New York is where they go during the breeding season, and whether they are breeding. Sightings are virtually unknown from June through November. The birds have never been recorded on breeding bird surveys (or for that matter on any Christmas Bird Count). There is some anecdotal evidence of nests with fledglings from Valley Stream, Nassau (circa 1987), and Cunningham Park, Queens (late 1990s), but otherwise the birds just seem to disappear. So could the population be composed of old birds and/or recently released birds? Are they dying out? It’s possible. But this year I observed a pair copulating in Hillcrest, and in 2009 I observed young birds in the Queens flock, so they probably are breeding somewhere. It is quite safe to say, however, that Mitred Parakeet is not a candidate for addition to the New York State Checklist of Birds at this time.

To help solve the mysteries, I would appreciate readers contacting me via email at sausubel AT nyc.rr DOT com with any sightings of Mitred Parakeets in the New York City metropolitan area, especially during the summer and fall. Anyone interested in learning more about these colorful and fascinating birds can read my article recently published in The Kingbird. 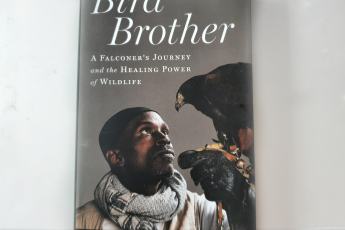 Bird Brother: A Falconer's Journey and the Healing Power of Wildlife; by Rodney Stotts with Kate Pipkin