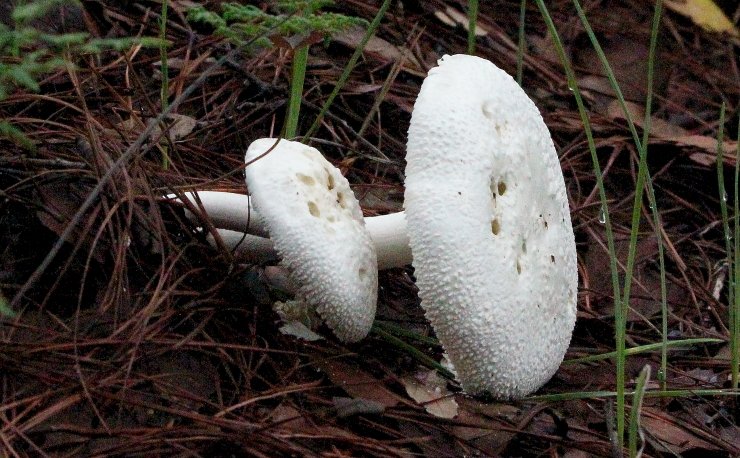 If you read my last post, you will know that my last three weekly outings were not overly productive, as far as birds are concerned. I blame, in chronological order, an unexpectedly dry lake, an unexplained lack of avian activity, and lots of drizzle.

But any birder can tell you that a bad day birding is better than a good day almost anywhere else. For me, that has a lot to do with all the beautiful places I get to be, while looking for birds. Of course, I always wake up hoping for a lifer or FOY bird. But if I don’t see those, or even many birds at all, I can still count on spending a beautiful and renewing morning. You could say that I don’t bird just for the birds.

My recent drizzle-days produced some particularly bad bird photos. I won’t torture you with those. But our rainy season, while bad for wildlife photography, has encouraged some beautiful non-feathered life forms. The fact that these life forms stay perfectly still for my low-light photography is certainly an important side-benefit.

The area just past the town of San Miguel del Monte may have been low on birds, but it turned out to be wonderful for mushrooms. The variety of their shapes and colors demanded that I turn my camera earthward. 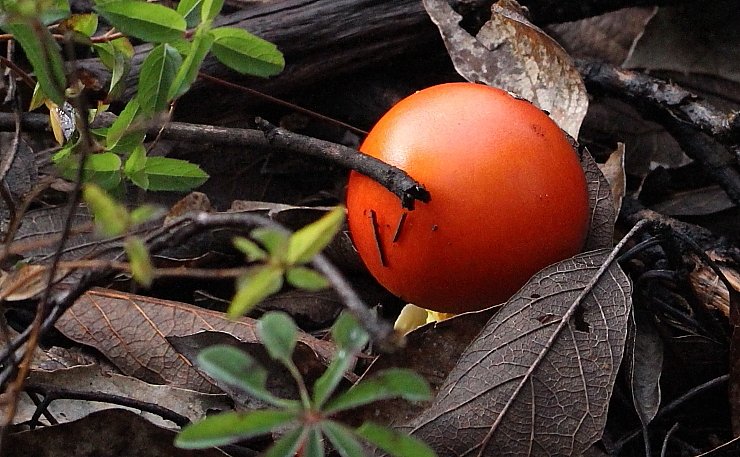 It was this perfectly spherical mushroom that first drew my attention. 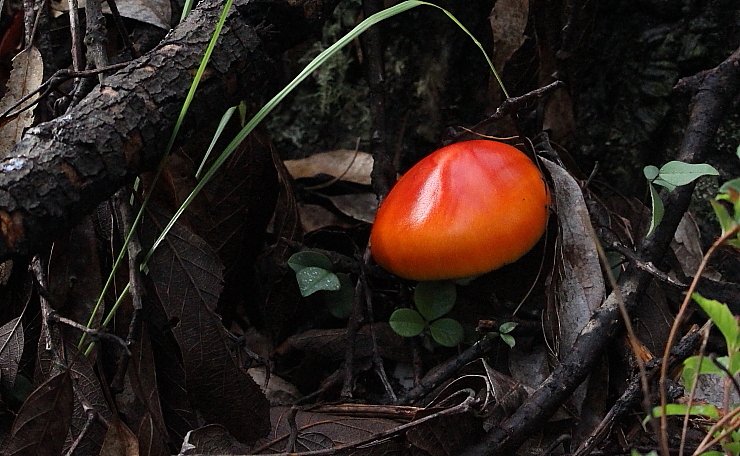 Then I saw its shiny partner. 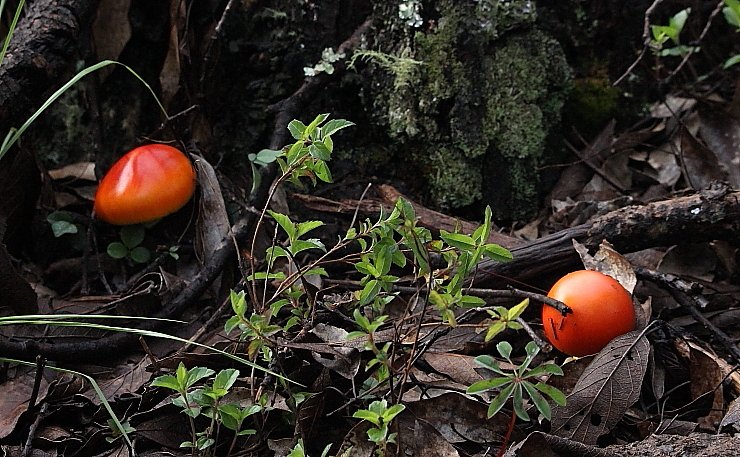 Once I saw my shiny orange prizes, I began to notice other equally interesting mushrooms and fungi everywhere: 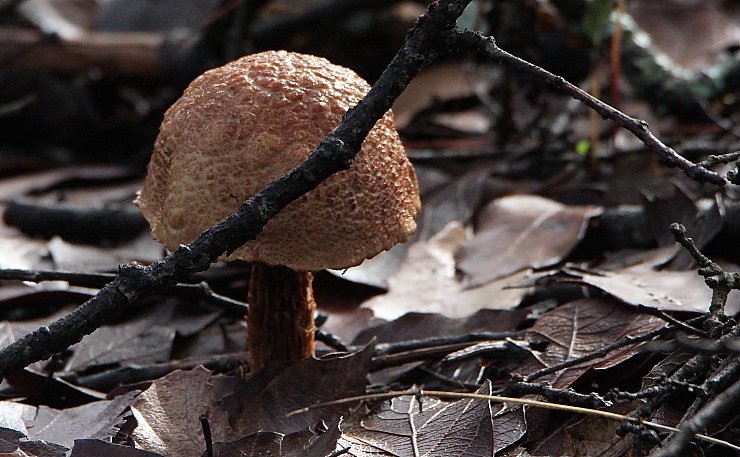 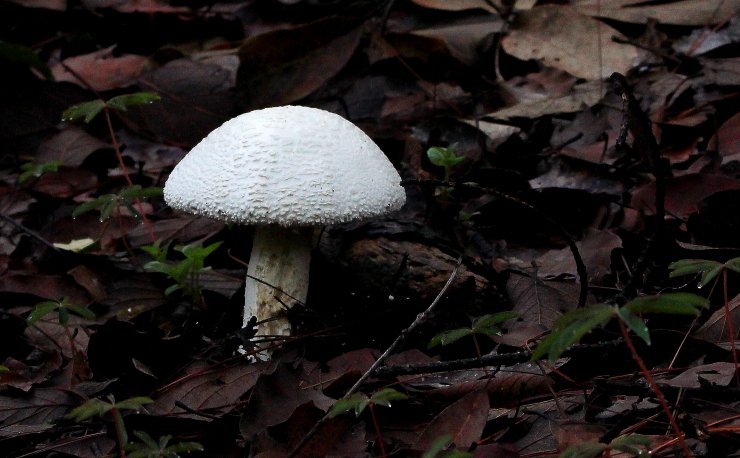 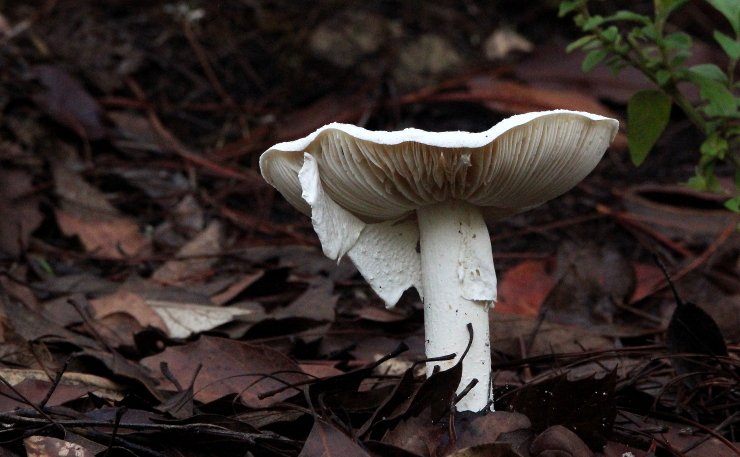 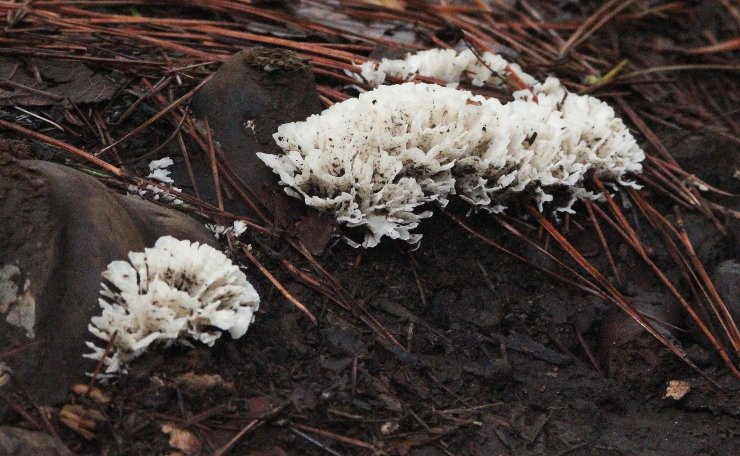 This variety just turned up in my garden! 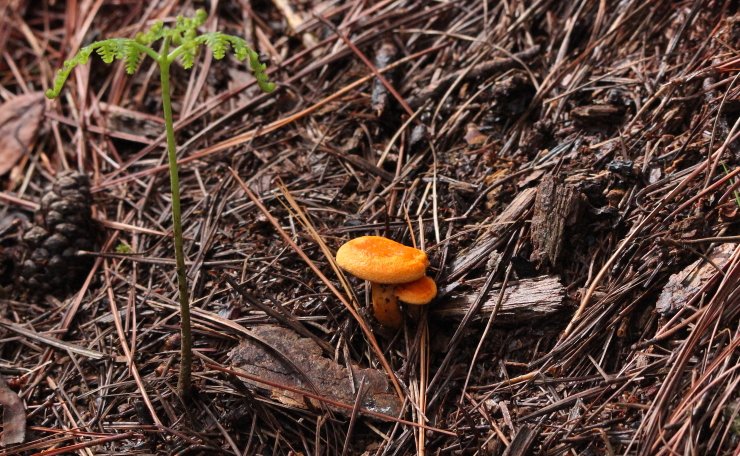 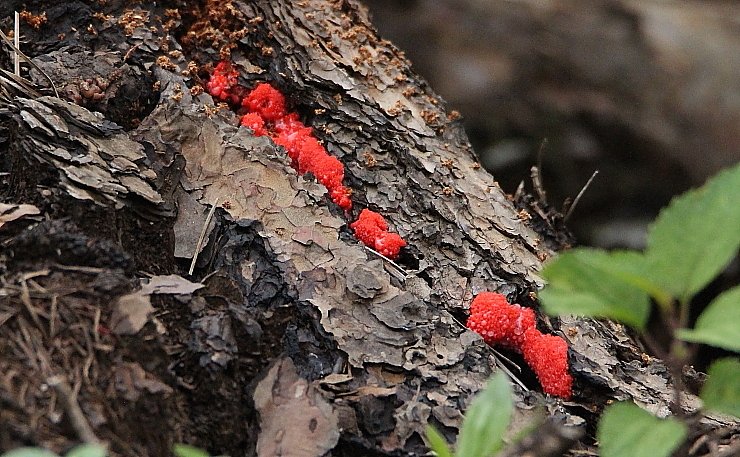 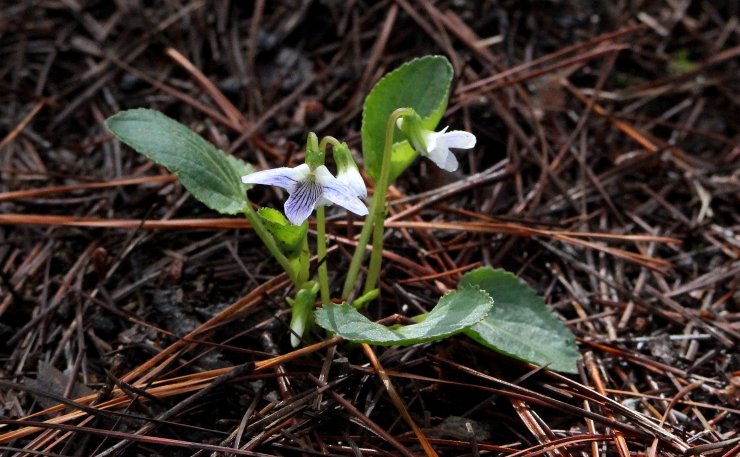 It was not until I got home that I discovered my first orange mushrooms were edible, and highly prized. But I also discovered that they have a close relative, the Fly Agaric (Amanita muscaria), that is deadly. And while this poisonous species is usually red and spotted, older examples can lose their spots and take on an orange hue. So I’m glad I didn’t taste my first examples. I’ll just settle for having gotten to see an example of their poisonous relative in the woods around Laurelito, the very next week (as well as several people harvesting Amanita ceasareas). 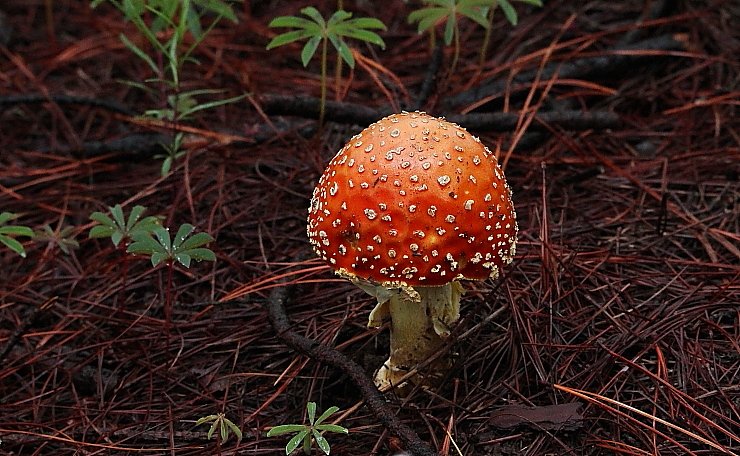 In a grassy area below Laurelito, I came across this other beautiful mushroom, which may have been harvested by someone and then dropped, since there were no other examples nearby. 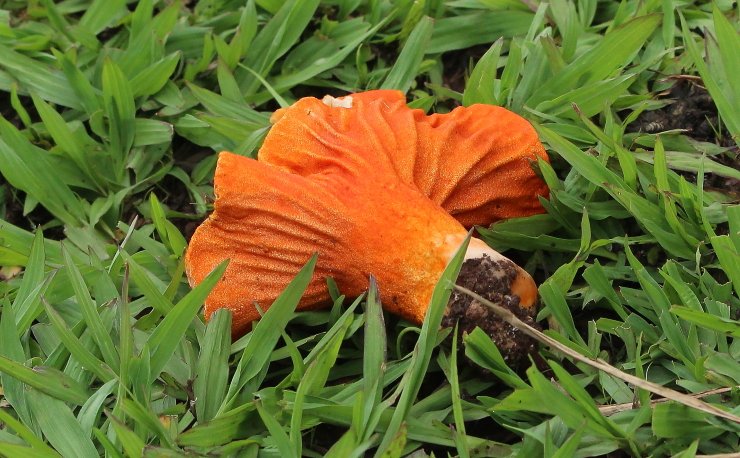 This day’s highlight was a ground orchid, Govenia sp. Birders in more tropical areas perhaps don’t feel the same thrill, but wild orchids are still rare enough in my area to make my day, whenever I see them. 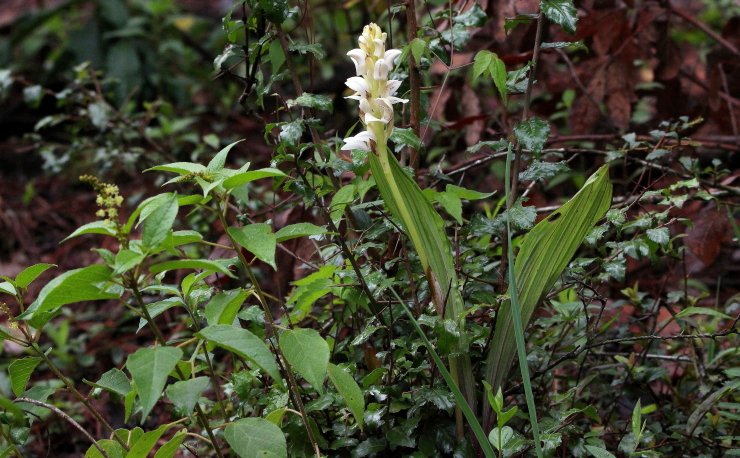 Birding days aren’t just about what you see, whether feathered or foliage. Sometimes it is the experience that makes them memorable. My Laurelito trip was topped off by my discovery, when I walked back to my car, that it had been turned into a turkey perch. A group of exceedingly tame domestic turkeys had gathered near it, and two had decided it looked like a great roosting site. I immediately remembered the Sandra Boynton cartoon of an elephant lying down while turkeys stand upon it, with the caption “Don’t let the turkeys get you down.” 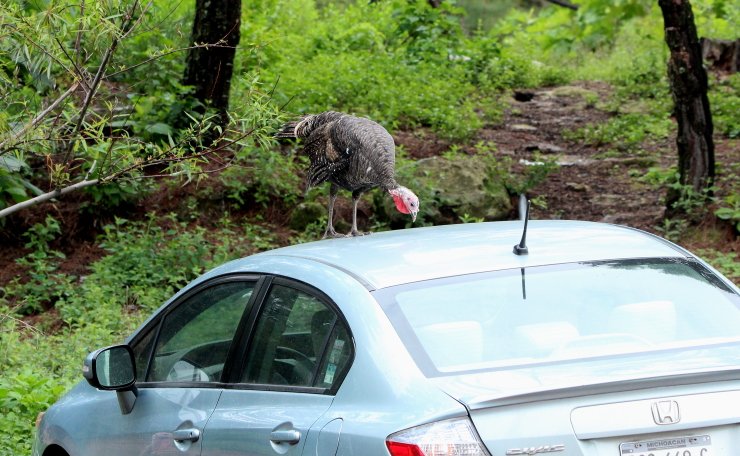 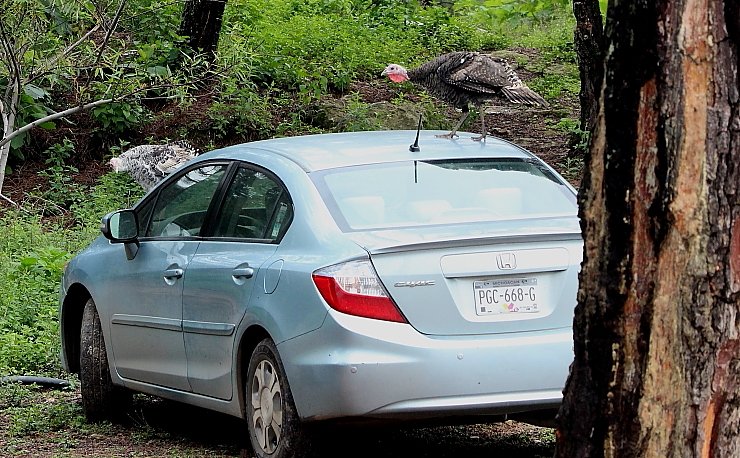 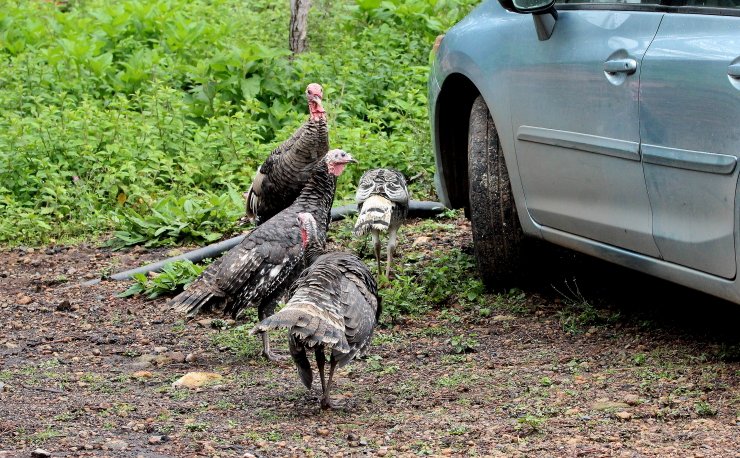 These guys would have let me pet them, had I been so inclined.

(As a final note, I should note that the non-bird points of enjoyment during my outings are many, and varied. This week, I went to a much drier site. No mushrooms were to be seen. But, oh! The butterflies!) 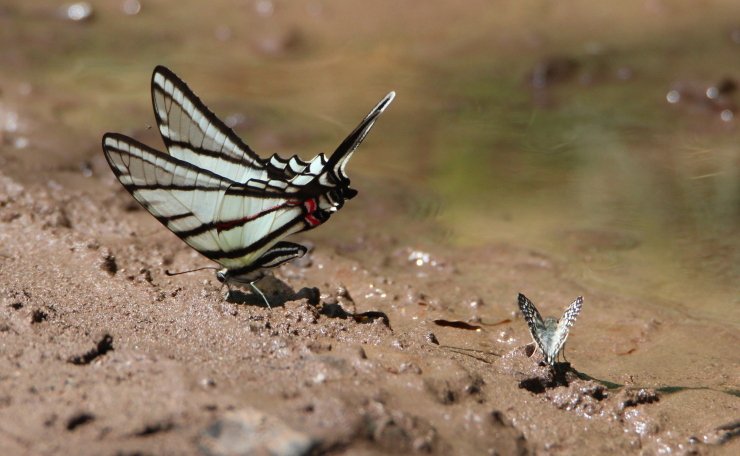 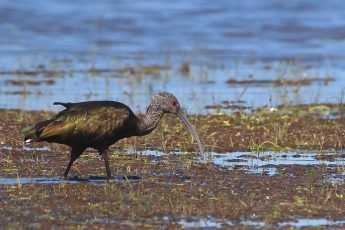 Where Are You Birding This Second Weekend of March 2020?