This weekend’s birding activities began with our foray to Central Park, but hardly ended there. On Saturday night, Sara and I, accompanied once again by Seth and Christine, visited Ward Pound Ridge Reservation to observe the mysterious dance of the woodcock. The bizarre breeding display of the American Woodcock is clearly a big draw; over forty people turned out on date night for the program hosted jointly by Ward Pound Ridge and Bedford Audubon. The Core Team has yet to see a woodcock or even a snipe, so while we were eager to view this bird in any setting, the prospect of observing its unique aerial display of amorousness was particularly thrilling. Alas, it was not to be. I’ll cut to the punchline and reveal that we neither saw a woodcock nor heard its distinctive “peent.” Amazingly, this was only the second time in 21 years of running this program that the main attraction failed to show…they’re that predictable. We did, however, learn some incredible facts about this singular species:

One last fun fact about this bird is that it is crepuscular, most active during dusk and dawn. That is how we found ourselves standing in the middle of a grassy meadow well after sundown. Though the woodcock didn’t turn up, the trip was far from a total wash. We spotted Eastern Bluebirds, Dark-eyed Juncos, various waterfowl, and plentiful bats. We also identified a lone Broad-winged Hawk while the sun was still up and an imposing Great-horned Owl silhouetted ominously against the twilight sky. 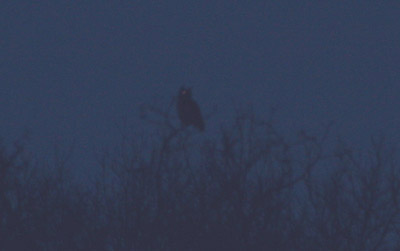