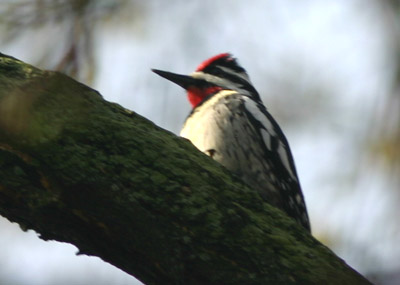 Seth, flush with success over his star turn as host of I and the Bird #21, decided to take a victory lap from Rochester to New York this weekend. Charlie was so impressed with Seth that he hopped on a plane straightaway to commend his hosting panache. Both of them might claim different reasons for being in NYC this weekend (visiting the charming nephew, trying to earn a living, etc.) but I’m just calling it like I see it. This is how we all happened to meet in Central Park on a sensational Saturday morning.

What a day! NYC is so vibrant right now. Buds are bursting and blossoming in a panoply of verdure, a signal invitation to winter’s migrants that spring has indeed sprung. Our errant songbirds have clearly taken the hint. A few more species have trickled in or emerged from hiding this week. Hermit Thrush, for example, have been lurking out of sight during the cold months. Offer them temperatures above 75Â°, though, and they start competing with robins for the title of Top Thrush (as if anyone could oust the redbreast from that position!) Speaking of robins, there were plenty of ’em, along with crows, doves, cardinals, grackles, and blue jays. Woodpeckers were everywhere as well, with Downy, Red-bellied, and Northern Flicker all appearing in their usual robust numbers. The pleasant Picidae surprise of the day was a male Yellow-bellied Sapsucker, a bird that I’ve seen more reliably in Central Park that anywhere else.

The Smithsonian Handbook to the Birds of North America — Eastern Region says of the Ruby-crowned Kinglet that it “drinks tree sap, especially from the drill wells of sapsuckers.” Ruby-crowns were practically dripping from Central Park trees this weekend, but wouldn’t you know it, a full-scale kinglet carousal erupted at the tree the yellow-belly was cultivating. This was the first time I ever observed this behavior. Though it seemed that every single songbird was a kinglet, a few other species managed to push through the throng to get noticed. The only flavors of warblers I saw were Pine and Palm, but waterthrushes, black-and-whites, and others have been turning up within to New York city limits. Charlie’s sharp eyes also picked out a pointy little Blue-gray Gnatcatcher high in the treetops. He also led us to an idyllic secluded spot right on the water, with Great Egret and Double-crested Cormorant in view, a lovely nook where Mason seized the opportunity to touch his first turtle, one of the bevy of Box Turtles sunning themselves on the rocks. Yes, this international globetrotter seems to know my local birds and park better than I do, but I’m not jealous!

We only had a couple of hours to spare, so the birds listed above represent most of the morning’s species. We did encounter a variety of sparrows, most of which were White-throated or Song. However, I did pick up my first Swamp Sparrow of the year, thanks, naturally, to Charlie. I strongly recommend his account of our meeting for the quality of both the writing and photography, especially his Yellow-crowned Night-heron. The shot he doesn’t have, though, is this historic portrait of three, yes three hosts of I and the Bird. To get more than that in one place, we’ll probably need to throw a convention. 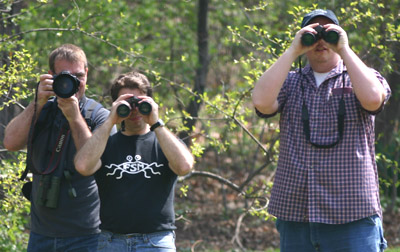 Charlie, me, and Seth representing in NYC