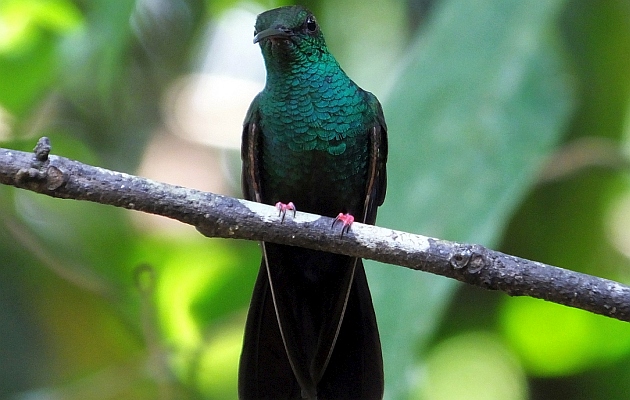 Global Big Day has become an annual collective event in May that encourages thousands of people to watch birds on the same date. As far as promoting birding goes, the only thing better might be October Gobal Big Day! In Costa Rica (and, I gather, some other tropical places), our local birding community gets involved in both GBDs but we’re especially pleased with the one in October because for those of us on the flyway way south of northern breeding grounds, the 10th month is our “May migration”.

It’s when we see more migrants and therefore, when we can see more species in one day of all out binge birding. Rivers of raptors, aerial streams of Chimney Swifts and swallows, warblers, shorebirds, and more (oh my!). If there’s a downside, October is also when we can get heavy rains, especially from tropical storms and hurricanes in the Caribbean. In mountainous Costa Rica, that can translate to such disasters as flooding, landslides, and road closures. It makes October birding unpredictable and for October Global Big Day, all we can hope is for hurricanes to happen on another date.

This year, as luck would have it, we felt some of the side effects of Hurricane Julia on October Big Day. We had a lot of rain in some parts of the country, some places had landslides, and birding was somewhat limited. However, on the birding side of the coin, it could have been worse. Since most of the rain happened the evening of the 8th and the following morning, many sites had good weather on the morning of October Global Big Day and because of that, local birders still managed to identify well over 700 species in Costa Rica (!).

Personally, I wanted to try for a serious Big Day on October 8th but as much as I stared at weather forecasts and yearned for them to differ, I had to accept that rain looked pretty likely at various points and times on the Big Day route. There was no point in trying for serious numbers if it was going to rain, especially in the night and at dawn. Fortunately, my partner and I had a back-up plan, one that was more relaxed than an all out Big Day and that would also bring us to one of our favorite areas of Costa Rica, the southern Caribbean zone.

This can be a long drive from San Jose, especially with road construction and slow and seemingly eternal truck traffic, but once you get there, the voyage is worth it. Lots of wonderful and accessible rainforest habitat filled with resident species and loads of migrants, a beautiful coast with chances for other birds, and many choices for accommodation and good cuisine, the southern Caribbean is fun, birdy, and fantastic. Not to mention, this part of the country can be less affected by rain and storms in October than other areas.

On October 8th, 2022, that good weather held out and we had a wonderful day of birding in Costa Rica. In keeping with GBD norms, I also made eBird lists, including a trip report. We started at 4:30 a.m. and ended later that eveing with a final total of 154 species. Here’s a brief summary of that nice day of birding:

This is an inviting gravel road situated near Punta Uva that passes through lowland rainforest and a couple of small farms. There’s a lot of potential and I had never had the chance to bird there before dawn. I’m grateful to have finally gotten that opportunity on October 8 and look forward to doing more pre-dawn birding on that road and other sites in the area. Buy why pre-dawn? Why be out there in the tropical dark when you can be happily asleep?

Birds of course! To properly assess owls, other night birds, and the dawn chorus, you really have to be out and about by 4:30. Four would be even better and if you have a thermal imager, then you might even want to start at midnight (I know, that’s extreme but Big Day birding is what it is).

Pre-dawn birding for us on October 8 gave four owl species, a Common Potoo (not so common), and then a host of species right at and just after dawn. I appreciated hearing the calls of the birds waking up, of seeing migrant Swainson’s Thrushes from distant boreal places cloaked with conifers hopping on a gravel road in lowland rainforest. The calling Collared Forest-Falcon was also cool, so was Bronze-tailed Plumeleteer (the species at the top of this post), and so were the 120 other plus species we had from 4:30 to 8 just on that one road.

After Paradise Road, we drove to the Degustibus bakery (my favorite Italian bakery in the area), got goodies and headed back to our rented log cabin at Olguita’s Place in Punta Uva. We enjoyed breakfast and some rest while watching and adding White-lined Tanager, Northern Waterthrush, and other birds, including a Prothonotary feeding on an unidentifed exotic fallen fruit (I kid you not, those Golden Swamp Warbler can get create and crazy in Costa Rica).

Eventually, we made our way to the nearby beach, noticing a group of Eastern Kingbirds hanging with a pair of Long-tailed Tyrants en-route. At the beach itself, we were met by stiff winds and dozens of weekenders. As the people drank beer and laughed on the beach, we watched one guy foolishly swimming in very rough waters while also scanning for birds. We didn’t see much but thankfully, the guy did not drown and scanning eventually did pay off with a sudden flyby of two adult Bridled Terns!

I had expected a jaeger or something else but sure, we could take Bridled Tern for the day. It’s not a bird often seen from shore in Costa Rica and we had wonderful looks. I’m sure other good birds also flew past at some point that day but the only other ones we saw were a young Peregrine attacking and nearly catching an unidentifed peep, and frigatebirds far offshore. I couldn’t help but wonder if they were catching small migrants lost at sea.

In the afternoon, we drove to the nearby village of Manzanillo. This site can be great for migrants even if it is losing some habitat to housing. We picked up a few more birds, nothing crazy but a few birds nonetheless. The vegetation and football pitch (aka soccer field) are always worth checking; on other days, Whistling Heron and other rare birds have been found here, last year we had a Gray Kingbird.

With nothing going on in the village, we made a quick stop at the RECOPE Road and picked up White-flanked Antwren and a few more species before driving back to our cabin.

A final check turned up a distant calling Laughing Falcon but not much else. I couldn’t help but wonder if the hurricane had actually stopped migration to the north of us. That would have explained the lack of swallows and other birds that should have been moving through. After that, it was off to dinner at a near Caribbean restaurant for a fine end to a satisfying, easy-going October Global Big Day in Costa Rica. 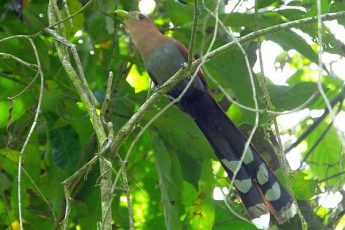