Once our ceremonial duties at Jay and April’s wedding were concluded, it was time to move south to visit old friends in Orange County. We wished the happy couple the best of luck and took off. But first, we had to go back to Sepulveda Basin! We saw all of the birds of the previous day along with a new friend, the Ash-throated Flycatcher.

Sara’s old college roommate, Gina married my old college suitemate Mikey many years ago, and the two relocated to Orange County. Our plan was to visit for one night and then move on for our last night in California. However, we had such a great time that we stayed both nights. Gina and Mikey were fantastic hosts and their baby Jeffrey is really amazing. They took us out to Balboa Island (no relation to Balboa Park!) in Newport Beach. The coast was rich with gulls, of course, but as far as we could tell, they were all Western Gulls. A boat tour of the harbor showed off a host of gulls, terns, and pelicans, as well as a buoy full of sea lions. 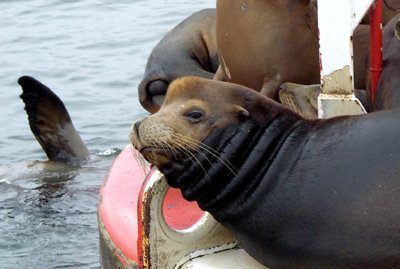 One thing we didn’t know about Gina is that she’s a bit of a bird watcher herself. Knowing our mad desire for new birds, she took us to a nearby lake that she said hosted the wildest waterfowl she’d ever seen. She wasn’t kidding! This artificial lake, part of a residential complex in Irvine, was the home of some of some seriously exotic species. The recognizable birds included Mallards, Coot, a pair of Western Grebe and an exquisite male Wood Duck. The exotics were another thing altogether. One odd duck was similar to a mallard, but with a white bib and the most peculiar hair-like tuft on the back of his neck. We actually saw a few of these variable birds, but only one with the tuft. I overheard a number of different groups independently dub this fellow “Mohawk.” 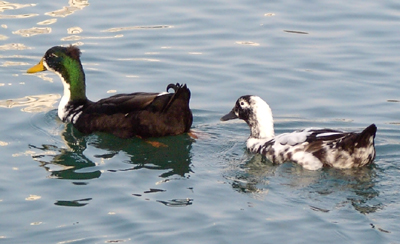 Another weird waterfowl, this one a species of goose that adopted this lake as a home, was a bit easier to track down. This goose has a funny, splotchy circle around each golden eye, almost as if its mascara ran, and sports various shades of brown plumage with pink feet and bill. This bird, of which I spotted six at the lake, is an Egyptian Goose, an obvious exotic. 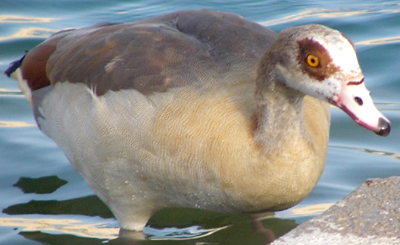 You can’t add these birds to your life list if you’re trying to stay ABA-compliant, but if you’re in the neighborhood, you might want to check them out anyway.