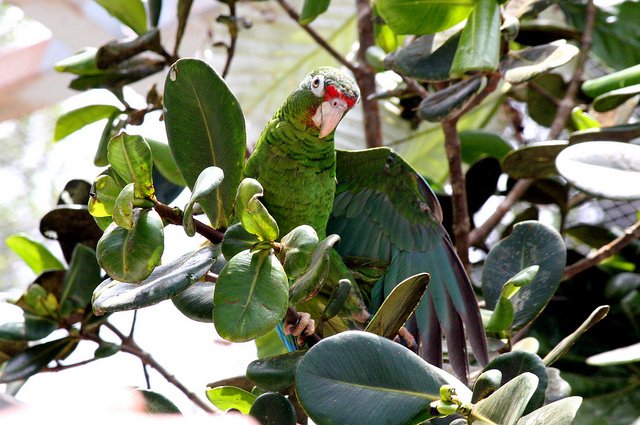 Because “duck, duck, goose” is a little too wintry (at least in the Northern Hemisphere) for a post written in the dog days of August.

In Australia, ornithologists have finally gotten their hands on a Night Parrot, the first such capture in more than 100 years. The bird is so rare and elusive that it was thought to be extinct. By tagging the Parrot and monitoring the area with remote cameras, scientists hope to learn more about this species and how to keep it safe.

Twenty-five Puerto Rican Parrots are being groomed to be pioneers: The Critcally Endangered birds have been transported from existing colonies to the Maricao State Forest. After a year in a large flight cage, the Parrots will be released in an attempt to establish a third population; existing breeding centers in El Yunque rainforest and the Rio Abajo Nature Preserve number almost 400, with roughly 100 more estimated to exist in the wild. (Check out more photos of these beauties, like the one above, at the USFWS Southeast Region’s Flickr site; and video of their transfer to the flight cage at http://www.fws.gov/southeast)

If you follow baseball, you’ve probably heard of the “rally squirrel” and the infamous “rally monkey.” Finally, avians have earned their place as a good-luck charm: At least one member of the New York Mets credits their recent success, at least in part, to a parakeet that’s been spotted around Citi Field as of late. Outfielder Yoenis Cespedes, a recent addition to the team, was in a slump until the bird’s arrival; after donning a neon yellow sleeve in solidarity with the brightly colored parakeet, he belted his first home run as a Met. Rally Parakeet FTW!

And if your life list includes Bahama Woodstar, you might want to get back out into the field. Scientists have gathered evidence in favor of a split, naming the Inaguan Lyretail as a separate species, due to differences in vocalization, physique, and behavior, confirmed by genetic studies. Researchers are planning to ask the American Ornithologists’ Union to make the split official.

Vietnam Getting into Swift Nest Business