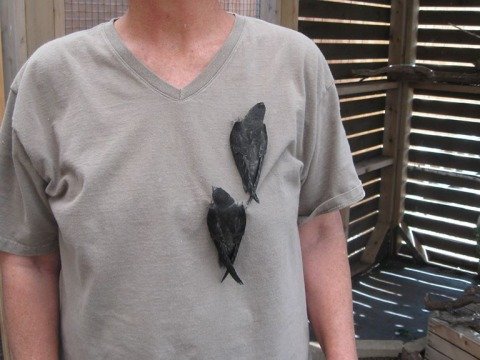 Last time it was birds and bling.

Normally wildlife rehabilitators do not go around wearing birds on purpose. It’s just something that happens.

“The Chimney Swifts I had this season made fabulous brooches,” said Leslie Jackson, who sent the photo above (along with the caption “All the rage in Paris.”) Swifts and swallows are notoriously hard to raise and/or rehabilitate, so rehabbers who don’t specialize in them tend to lose their heads when they’re successful.

“The NAILS they possess!” said Leslie, who successfully raised five of them last summer. One evening she actually visited them in their flight cage – dressed not in a sensible shirt like the one pictured, but in something slinky – to give them a quick feeding before going out. “Two of them immediately landed and scooted up my chest, leaving 10 million little holes in my shirt. So much for dressing up in the middle of rehab season.”

“You went into a flight cage wearing nice clothes?” I asked, amazed. “Were you crazy? Was it a full moon?”

“I was drunk on success,” she sighed.

“Young White-throated Swifts scurry up the sleeve of my sweatshirt every now and then,” said Veronica Bowers, displaying the true selflessness of rehabbers: sometimes we wear our fanciest bling where the public can’t even see it.

“I had a tiny Mallard who insisted on cuddling up between the two shirts I wear to keep warm,” said Donna Osburn. “It’s fun to try and clean cages and feed babies with a duck attached to your shoulder.”

“I do not wear any jewelry while rehabbing,” said Maureen Eiger. “Oh, wait – do baby birds who fly onto your head count?”

Yes – for this discussion, all birds who either land on or ricochet off your head can be counted as accessories. I have worn imprinted American Crows as hats, but it’s not comfortable and often leads to another type of ornamentation: the wearing of bird by-products as bling.

“You know how normal people check themselves in the mirror before they go out in public?” asked a friend of mine in the grocery store one day. “You ought to try it, only make sure you turn around.” It seemed my otherwise clean T-shirt had a long, thick streak of bird doo down the back, evidence of a trip through the raptor flight cage. Actually, I knew I’d been hit, I just forgot. I ignored her ‘normal’ remark and said, “Maybe people will think I’m wearing something expensive and hand-painted,” for which I received only an exaggerated eye roll and a long sigh.

“I realized I was in deep when my daughter told me I had bird shit in my hair,” said Jodi Swenson, “and my reply was ‘Just leave it, it’s easier to flick out when it’s dry.’”

Civilians: I hate to tell you, but it gets worse. “One day my imprinted House Sparrow was sitting on my hand while I was eating Vanilla Chobani yoghurt,” said Laura Westlake. “I thought I had dripped some onto my arm, so I licked it off.”

Stories like this elicit howls of laughter from wildlife people. “Oh, Laura!” cried Eileen Wicker. “You gotta be a rehabber!” Wearing birds of prey is a very bad idea, unless they are small, well-behaved education birds like Puck, the American Kestrel shown here with Louise Shimmel. Puck does not like to travel in anything enclosed, so he rides to programs either on a display perch attached to the front seat or on the lap of a passenger. However, he prefers to ride shotgun on the driver’s shoulder.

« Previous post
Walter’s Book Now Available
Next post »
Where Are You Birding This Second Weekend of December 2013?