A nice thing about spending 7 months with the same bird, particularly a second year bird, is getting to watch it molt and acquire its adult plumage. Watching a bird mature is also gratifying because the majority of young birds don’t make it to their second birthday, so every adult you see is a special bird indeed. I remember noticing little red spots on Patch’s rump and closer inspection showed them to be the beginnings of her red tail. As those deck feathers grew out, I noticed scatterings of dark feathers on her back and wings which hinted at the beautiful deep color she would wear the following year. Red-tailed Hawks, like most birds, molt symmetrically. I’m guessing it pays to keep things in balance when you make your living on the wing. It can make for a disheveled appearance but birds mid-molt are really fascinating to behold. Replacing feathers is an energy intensive process and most birds try to get through it before migrating, and outside of the breeding season. Molt can be suspended if the energy is needed for other critical functions (I’ve seen this happen in breeding birds).

(Warning: Molt geek content follows) Flight feathers are shed annually from locations on the wing called molt centers. One of these centers is located right at the break between primary and secondary feather tracts. Primary molt travels symmetrically out toward the wingtips, and secondary molt travels toward the body from the 1st and 5th secondaries and in both directions from the 12th secondary near the body.

A cool thing to notice it that new secondary feather in the wing on the right side of the picture (above). The color is different, the tip is pristine and not worn, and the subterminal band is wide and dark, while the surrounding juvenal plumage has brownish, thinner subterminal bands. As Patch began to molt her body feathers as well, smatterings of rufous color began appearing on the light medallion she wore on her chest as a kid. This bird was going to have the wonderful reddish tones associated with Red-tailed Hawks west of the Rockies. Six months later she returned to the park as an adult bird with her red tail fully grown in and her beautiful warm coloration. Redtails don’t have time to molt every feather so they retain feathers from the previous year and this helps in aging them… to a point. If there are retained juvenal feathers you know it’s a 2nd year bird. If you look carefully and find retained adult feathers and know how to read the waves of molt in the wings you can determine a 3rd-year bird (molting starts at the molt centers every year regardless of how far along the process got the previous year, and each annual progression thru the wing is called a wave). Eventually the adults end up with complex patterns of molt and the best you can do is call it an after 3rd year bird.

If you look closely at the image above you might be able to see Patch’s eye color just starting to go brown in the lower third. This is another indicator of age. The iris color gradually shifts from the pale straw color of kids to the rich, dark brown color of older birds. Second and third year birds often have a darker lower half of their iris as they go through the transition. But this isn’t a reliable way to age a bird. Adults can have pale eyes and kids can have dark eyes… one of the wonders of Redtails is their amazing variability. She was as comfortable as ever in the park and continued her daily patrols for another few months. Eventually she found a more suitable place and moved on, ending her reign at Alta Plaza Park. Patch provided so many moments of wonder and awe both to me and the other park goers. I can’t imagine having another sustained encounter like that. It was a special time and the reason I’m such a raptor enthusiast to this day.

I’m in Tanzania now dreaming up my next post so I’ll see you in 2 weeks. Thanks again for such a warm welcome to 10,000 Birds.

Catch up on the previous parts of this series here… 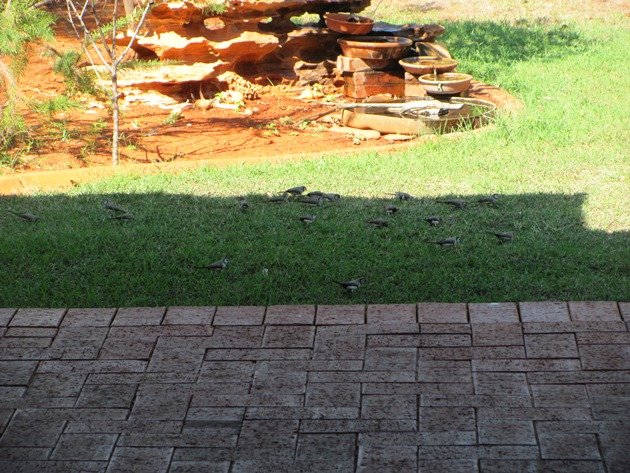