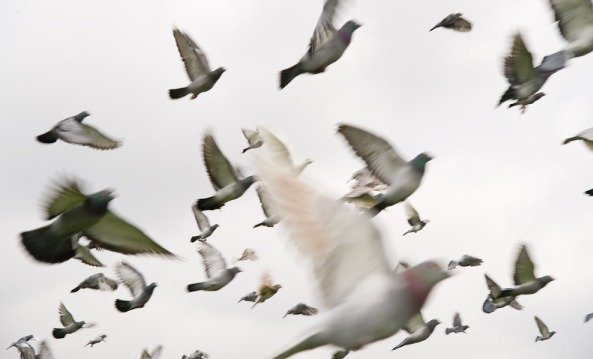 My friend Ruth, who is from Northern England, has a phrase she uses when her dog bursts into fits of irrational exuberance. “Look at him,” she says, as he races madly around the yard. “He’s gone crackerdog.”

Andrew Revkin recently described in his Dot Earth blog how he watched, amazed, as a white pigeon raced the traffic on the Palisades Parkway, heading north from New York City. Let’s try to look at it from a pigeon’s point of view: it was a gorgeous spring day, it had been a grueling winter, so why not play Days of Thunder?

“Look at him,” Ruth would have said. “He’s gone crackerbird.”

An average pigeon can maintain speeds of 50 mph, but racers have been clocked at 90. Say what you will about pigeons – they’re among the most extraordinary athletes in the bird kingdom. Andy dug up this video of a pigeon pulling a similar stunt in Australia.

A few days ago my friend Melissa Gilmer called me from the Bear Mountain Zoo in New York’s Hudson Highlands. “We were down by the lake,” she said, “and there was a crow standing by the water with two mallards. The mallards saw us coming and swam away, and the crow swam after them.”

“Well, he tried,” she said. “But he didn’t do very well. Scudder (their long-time maintenance guy) had to go in and fish him out.”

Melissa was calling to see if I’d ever heard of a crow swimming, which I hadn’t. While the crow dried off we came up with various explanations, none of which seemed especially plausible (“Maybe he just likes ducks,” I said finally. “My cousin likes Scandinavians.”)

Maybe the vet will find something amiss. Maybe he’s someone’s ex-pet who grew up around ducks. Or maybe it was a nice spring day, and he just went crackerbird.

Has anyone else seen irregular bird behavior lately?

Bird Song and Parallel Evolution: learning from our feathered friends