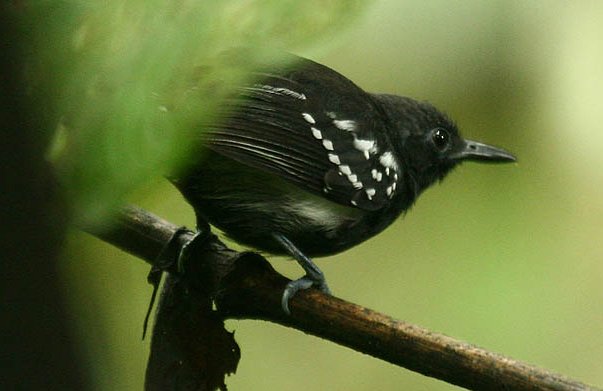 The famed Neotropical biologist John Terborgh, confirmed, through long term bird studies, what earlier naturalists suspected; the tropical rainforest is highly diverse, but species occur in very low densities. A particular location, such as Manu National Park in Peru where Tergorgh conducted most of his bird studies, can pack a staggering number of species, but the number of territories that each species held within the extensive study area was quite low.

Rainforest birds are extremely specialized and occupy microhabitats that often appear imperceptible in the chaotic structure of a rainforest. For instance, Silvered Antbirds (Sclateria naevia) forage at the edge of oxbox lakes, but seldom or never use the edges of interior forest creeks even when these carry slow moving water. Black Antbirds (Cercomacra serva) are specialized in the successional second growth stages of clearings opened by a treefalls. Amazonian Antpitta (Hylopezus berlepschi) will also use these treefall gaps, but only the forest floor. Moreover, Warbling Antbirds (Hypocnemis peruviana) will occupy a portion of a treefall gap, but at a height along the vertical length of the forest not used by black antbirds. The birds I mention above hold static and small territories. But their territories are not exclusive to themselves. These territories are also used by another 45 or so species that move through the forest as part of a mixed species foraging flock. Biologist Charles Munn studied these mixed flocks in Manu National Park. He learned that species flocks occupy and defend a territory as a flock. Each mixed flock’s territory is well delineated and defended against intrusion by neighboring flocks. Birds of neighboring flocks will engage in aggressive behavior every time they meet at or near a territory line. Each species in a flock is generally represented by a single pair, which in these territorial encounter will face off only its counterpart in the neighboring flock. According to Munn, these territorial squabbles are largely aggressive displays, but can turn violent if flocks member don’t respect territorial limits.

While more flock species feed largely on insects, each flock member search on different substrates or does something different. White-flanked Antwrens [(Myrmotherula axillaris), featured photo] for instance, will look for food in dead leaves, while Pygmy Antwrens (Myrmotherula brachyura) in live leaves at the tip of overhanging branches. Foliage gleaners will also look for insects on life leaves, but away from the edges of a tree. Woodcreeper forage only along on tree trunks at different heights and have bills of different length and shapes that enable them to exploit separate microhabitats. Flycatchers in flocks are of different sizes and use different techniques to catch their prey. Bluish-Slate Antshrike (Thamnomanes schistogynus) is a type of antbird that has developed a flycatcher-like technique catching nearly exclusively the insects flushed by other foraging birds. Microhabitat use and flocking behavior allow a large number of species to coexist at a particular rainforest site. But the large territories used by mixed foraging flocks and the many unoccupied territories can be a challenge when it comes to finding birds. One can walk in the forest and see only a few birds. Once the day warms up at about 10:30 am, bird activity declines tremendously and the afternoon is nowhere near as active as the morning resulting in a frustrating birding day. Alternatively, one can run through occupied territories and multiple mixed foraging species flocks where the sudden rush of many birds all around you can make for an exhilarating experience. At any rate, when visiting a rainforest site, it is better to stay multiple days to help minimize the risk of a disappointing birding experience. Staying for a few days at a site increases your chances to hit occupied territories and run into multiple mixed species flocks. This in turn will result in a longer list and a more rewarding birding experience.

« Previous post
Where Are You Birding This Fourth Weekend of April 2014?
Next post »
Diabolical Early Spring Migrants Quiz