‘Twas a cold rain that swept me southward to Cape May Autumn Weekend. Through New Jersey’s industrial corridor, across pristine stretches of barren pinelands, past every storied beach town along the Garden State’s Atlantic edge, temperamental squalls kept pace with me, presaging a very wet weekend indeed. For the two days I spent immersed in the festivities at Cape May, intermittent storms lashed all the birding hotspots, usually at the most inopportune times. Consequently, the bird watching was less than revelatory. The experience itself, however, was outstanding. Here are some of my reflections and observations, with more to come…

Cape May Migratory Bird Refuge
Upon arrival, Patrick of The Hawk Owl’s Nest and his wonderful fiancÃ©e Beth introduced me to the illustrious Cape May Migratory Bird Refuge, also known as The Meadows. Thanks to rain that grew ever more intense as we explored the area, we didn’t experience the full force of this exquisite array of saltmarsh, meadow, ponds, and beachfront. Savannah Sparrows and Yellow-rumped Warblers made up most of the passerines while Merlins and Northern Harriers were the dominant raptors. Waterfowl showed much more impressive diversity, including shovelers, mallards, gadwalls, both Blue- and Green-winged Teal, and an impeccable Northern Pintail drake. After a while, discretion became the better part of valor and we beat a hasty retreat from the sodden meadows. I wish I had found time to return, because the refuge was apparently stuffed full of flushing snipe the following morning.

Cape May Point State Park
I made a couple of trips to Cape May Point State Park, known for both its requisite lighthouse and equally impressive hawkwatch platform, in my brief time there. The first visit saw Patrick and I braving angry sheets of rain for absolutely no profit; once we realized that the distant shorebird we were straining to identify while getting drenched was just a solitary Sanderling, we had to call it a day. The next day, I dutifully visited the mighty multi-layered wooden platform that is the Cape May Hawk Watch command post, reputed to be the best site to see migrating hawks in the eastern United States during the fall months. Inclement weather kept raptor numbers low while I was on the scene, but fortunately the platform also overlooks a pond teeming with splendid birds. American Wigeons have never appeared as bright and beautiful to me as they did in that setting alongside mallards, shovelers, gadwalls, and a small pod of Pectoral Sandpipers. The only noteworthy sighting while I was there was a Dickcissel so drab as to be nearly unrecognizable among the House Sparrows with which it traveled.

Higbee Beach
I had it on very good authority that the best place to be on an autumn morning in Cape May (after Uncle Bill’s Pancake House) was Higbee Beach. Migratory songbirds mass on the northwestern corner of this landmass for a morning flight of unsurpassed agglomeration. That our tour, led by some very acute avian observers, took us in the opposite direction of the famous Morning Flight mattered not a whit because of, you guessed it, the increasingly inconvenient precipitation. At Higbee, broad fields gave way to tangled woods then finally brilliant dune forests thick with bayberry, oak, and persimmon along with multitudes of mosquitoes. The avifauna was perky, if not a bit prosaic. Besides yellow-rumps, we spotted plenty of Common Yellowthroats and Palm Warblers as well as a variety of sparrow species including but not limited to Song, Field, White-throated, Dark-eyed Junco, and Eastern Towhee. Merlins seemed to be everywhere (unless we were being stalked by one very persistent predator) but Sharp-shinned and Cooper’s Hawks also made the scene. Believe it or not, our rarest sighting was probably an American Lady butterfly.

Cape May itself
The town of Cape May lived up to its press as a charming seaside town rich with Victorian architecture and Jersey shore accouterments. A very welcome quality of this tiny island is that an embarrassment of legendary birding locales are all clustered together; within fifteen minutes, you can swap one outstanding ecosystem for another equally inspiring site. The metered parking gets old rather quickly though, especially during the shoulder season of autumn when so many stores and restaurants are closed.

The inaugural Bird Blogger Conference
It seems that birding bloggers, of which many were in attendance, have a lot in common with birding authors, editors, and product reps, no surprise considering how much overlap exists in those titles. The high point of the weekend for me was meeting so many exemplary, not to mention entertaining birders. I’ll be writing in detail about this point, as well as our boisterous Birds and Beers confab and Birdchick‘s Bird Blogging workshop in another post.

Assorted seawatches
A cape, if you weren’t aware, is a piece of land jutting into the sea. Not only do these geological formations lend themselves to the enjoyment of near-pelagic bird species, but frankly, after enough rain, you’d be hard-pressed to find a more appropriate activity than a good old-fashioned seawatch. I may have missed my target Parasitic Jaeger, but I did get golden looks at all three scoters as well as Northern Gannets, Lesser Scaup, both Common and Red-throated Loons, and tons of Royal Terns. The seawatch experience was so intrinsic to my first taste of Cape May that I’ll be addressing it in a separate entry very soon. 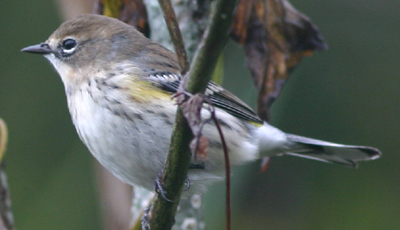 Your constant companion at Cape May Autumn Weekend