Any hummingbird in December in stoney Manhattan is a remarkable sight — after all, hummingbirds are such tropical-looking birds…

Wait. What does that even mean, tropical-looking? Why are these traits — small, quick, vivdly-colored and gleamingly metallic — associated with warm, lush climes? In part because of hummingbirds in the first place. For native people, living in South America meant living with hummingbirds, and for Europeans, discovering South American meant discovering hummingbirds (and, tragically, exploiting South America meant exploiting hummingbirds, destroying hundreds of thousands for stuffed specimens and in futile attempts to keep them alive in captivity.) So perhaps it is more right to say that the tropics are hummingbird-looking.

Either way, a tiny Rufous Hummingbird, flycatching and gleaning the last scraps of nectar in the winter-bitten garden outside the hard facade of the Rose Center of the American Museum of Natural History, is an out-of-place thing, with both the sadness and the extra thrill that implies for birders. But for how long will this be true?

Rufous Hummingbirds have a well-earned reputation for getting lost — they breed along the west coast but turn up in New York in fall and winter pretty regularly — and an equally well-earned reputation for hardiness, as they breed farther north than any other hummingbird species, into Alaska. More than any other member of their tribe, they are equipped to survive the getting-lost experience. So looking at a Rufous Hummingbird and seeing the tropics is a bit of an error (although the majority of individuals who don’t get lost winter in Mexico.)

The combination of tough birds, warming winters, and humans who leave their nectar feeders up later in hopes of providing succor to rarities — how long will it be before two Rufous Hummingbirds, male and female, manage to survive the winter in the same place at the same time? And might these turned-around individuals become equally confused about their appropriate breeding range? Like most tourists, are they destined to liven up the holiday season and head home when their season is over? Or like so many representatives of all lands and climes, might they someday make a home in the city and raise a family? Might these hummingbirds someday look like New York, and New York like hummingbirds? There goes the neighborhood?

Photo by David Menke, courtesy of the U.S. Fish and Wildlife Service 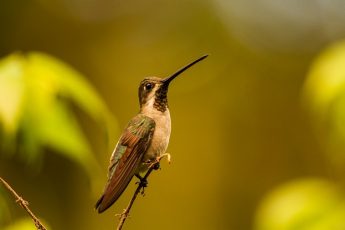