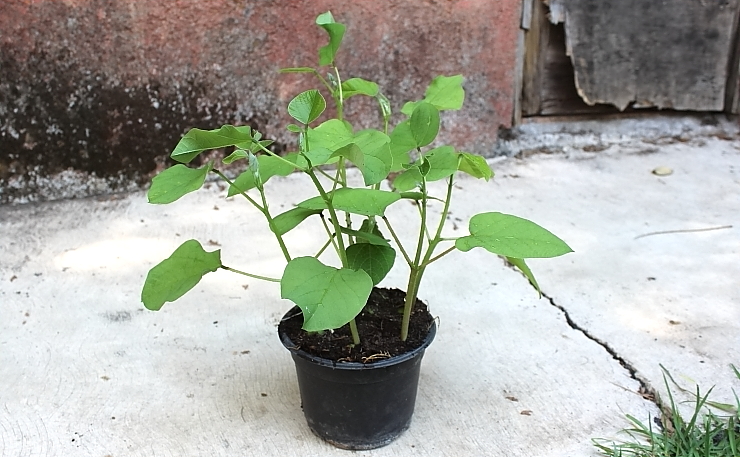 I bought my first plant for the garden, with my own money, when I was eight years old. I have no idea how I gathered enough money for the purchase, since I distinctly remember my allowance at that age being ten cents each week. (Admittedly, a dollar went a lot further in the sixties. But still…)

It was only a few years later when I discovered birding. By that time, my allowance was twenty-five cents. Fortunately, I had learned how to bake bread and sell it to the neighbors, multiplying that allowance by ten.

Eventually, I discovered the joy of putting these two pastimes together, by making gardens that are attractive to birds. These days, money is not so much of an issue. But there are almost no ways to buy bird-friendly native plants down here in Mexico, so I’m still doing it on the cheap.

My first experiments involved rooting cuttings of several of Michoacán’s dozens of Salvia species. Eventually I did the same with Penstemons and Agastaches — hummingbird magnets, all. But starting a mini-forest around the edges of our church’s one-acre lot would require more than cuttings, and local reforestation nurseries only offer a few conifer species. I wanted to recreate our region’s mixed conifer/broadleaf forests. These are normally called pine/oak forest, but they also include some other conifers and a dizzying array of broadleaf trees. I would have to learn to gather and plant tree seeds.

Oaks, the mainstay of many of our forests, have proven to be a challenge. Oaks apparently only thrive in the presence of certain fungi with which they form a symbiotic relationship. But last year I was able to double my oak population, with three new gathered-acorn seedlings, so perhaps these fungi are taking hold on our lot.

A half-dozen Colorín trees (Erythrina coralloides) are now growing on the lot, as well as a single Capulín (wild cherry). All were started from collected seeds. Prickly Pears, which sprouted on their own on my home’s roof, are now thriving on the church lot. But I want more!

So here are some of this year’s seedlings. The Erythrina breviflora is a plant I have dreamed of growing ever since I took this photo with this plant and a perfectly color-coordinated Red-headed Tanager:

I gathered the seeds, almost an inch long, over the winter. They seemed too large to sprout easily. But, to my shock, my month-old seedlings are now a foot tall! I’m really excited about these.

And the rootballs are at just the right point.

Half an hour later, and I have 7 happy individual plants (two of them in the ground at my home).

Another plant that would never turn up in a nursery, although birds love it, is the humble Guamúchil (Pithecellobium dulce, also known as Manila Tamarind, although it is a Mexican native). The seeds that produced these wispy shoots only went into their pot two weeks ago. (The melon seedling on the upper right is an inevitable product of using homemade compost.)

Here are a few of the many birds that were enjoying Guamúchil pods on the day I gathered them:

And even a male Painted Bunting.

Wild grapes can be found throughout our Pine/Oak forests, and they are very popular among a variety of bird species. I gathered some seeds last August, and planted a few just to see what would happen, even though it was way too late in the rainy season. To my surprise, one plant survives. I planted the remaining seeds a month ago:

Central Mexico is home to the original Dahlias, single flowers in yellow, orange and red. I gathered some seeds last summer, and planted them along with those wild grape seeds. In fact, a few grape seeds snuck into my Dahlia pot (and one sprouted in a flowerbed, mysteriously).

An eight-foot-tall red salvia has been delighting hummingbirds in my garden ever since I took a cutting years ago. This time I tried growing some of its seed for my botanist/birder friend. They look promising:

You may note that I have no oak seedlings this year. Acorns are eaten by all manner of mammals, birds, and insects, and oaks deal with this problem by producing few or no acorns one year, and a flood of acorns the next. Alas, I have found no viable acorns anywhere this past year — just as I am figuring out how to get oak seedlings to survive.

But of the native trees I would like to grow, the Jamaican Nettletree (Trema micrantha) surpasses all the rest. I have seen some two dozen bird species feeding on this tree: thrushes, finches and siskins, sparrows, thrashers, becards and tityras, chachalacas, vireos, tanagers, buntings, even several warblers and tyrant flycatchers. Last year I planted a few seeds in midsummer, and while they thrived, they did not have time to grow before the grasshopper season, and were consumed.

I went back to La Escalera this week hoping to find the first ripe seeds of this season, and there they were. They are buried in compost now, so I have nothing to show you there. Instead, I will have to show you some of the birds that were feeding on them this past Monday. You’ll see more than enough of the tree’s seeds in these photos.

I did not see this Lesser Roadrunner actually feed on the Nettletree seeds. But it definitely perched on the tree.

One final note: Attempting this sort of project requires almost no resources. My “tree nursery” is a collection of unsterilized, used plastic pots, filled with homemade compost (AKA aged kitchen and garden trash), placed in the dappled shade of my garden’s trees.

So why aren’t we all doing this?