At five-forty-five Sunday morning I started the eBird checklist while perched atop the Battery Harris Platform at Fort Tilden. It was the sixth year in a row of the Queens County Bird Club Big Sit, my favorite event of the year. As always, I was the first to the platform and in the light northwest wind and under a full moon I sipped my coffee and willed birds to make some noise so I could start checking off species. 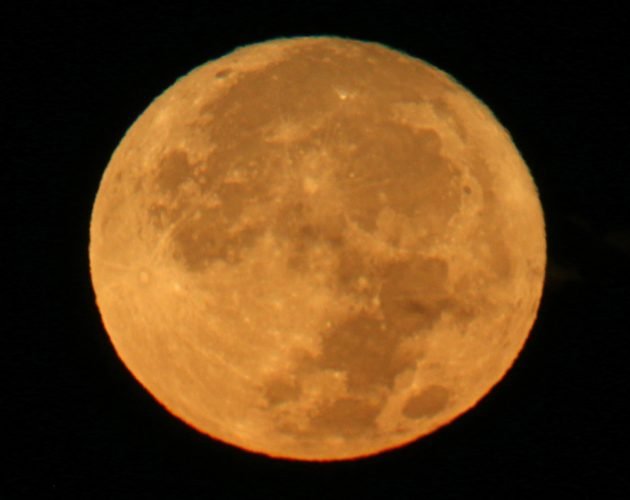 The moon was impressive as it sank down to the horizon.

Eventually, an Eastern Towhee che-winked and I had my first species for the day. By the time Matthieu Benoit arrived I had only added one more species, a White-throated Sparrow, but the sky had started to lighten in the east and after exchanging pleasantries we got down to the serious business of listening and scanning, striving to not miss a thing. Cardinals chipped, robins tut-tut-tutted, and flickers laughed from their perches. In the early going our best birds were a flyover Dickcissel identified by its characteristic call note and a Great Horned Owl hooting off in the distance, both birds making only their second appearance in the count’s history.

Birders arrived in rapid succession and I am not going to try to include a narrative of what birders arrived when and left when as the sheer number of birders makes that virtually impossible this year. The Big Sit has become popular! This has much less to do with the attraction of spending a day with me and much more to do with the 91 species we spotted in 2018, including some pretty impressive birds for New York in October. The added eyes and ears were extremely helpful as the winds weren’t strong enough to drive a massive morning flight so we had to work for many of the birds we added. The juniper bush heavy with berries behind the platform was also a great aid to adding species as quite a few birds stopped in at it to grab a berry or two. One of those birds was new to our cumulative list, a Cape May Warbler! It was our first addition of the day but it wouldn’t even be close to the last! 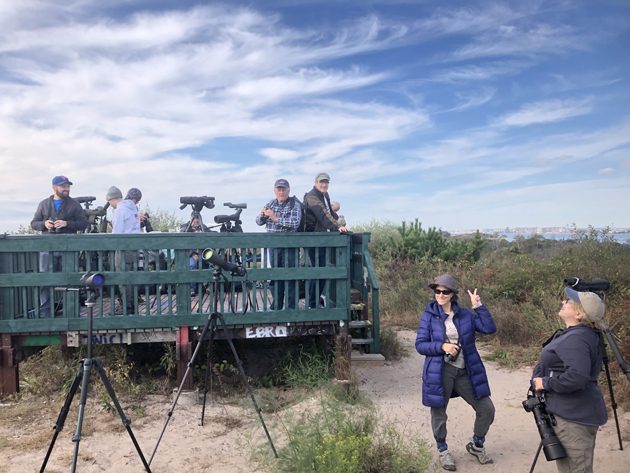 It was nice to have someone else willing to stand up on the railings of the platform with me so we could manage to spot sparrows in the brush far below as fellow birders worked to find and identify birds we needed that could be seen from the platform, a precarious method of increasing the list. Using this trick we added Field Sparrow (new to the list!) and Lincoln’s Sparrow. Steve Schellenger managed to spot a pair of Snow Geese dropping into a marsh all the way in Brooklyn on the other side of the Belt Parkway to add another new species to the cumulative list and a Black-and-white Warbler almost crashed into me before buzzing off into the bushes to add another new bird. 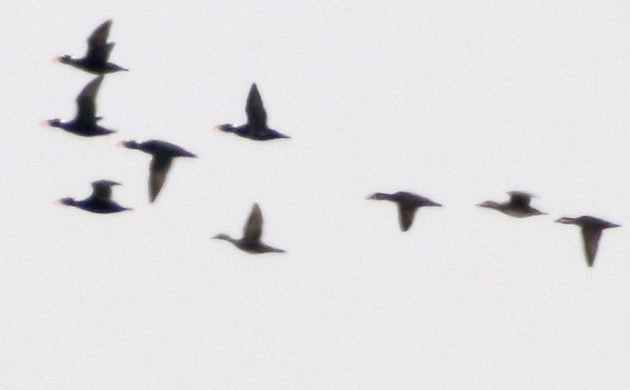 A flock of Surf Scoters on the bay side of the platform were a pleasant addition to the list. We had a scoter sweep for the second straight year!

As always, as the day went on our list building slowed down. We had managed most of the easy species and each addition would take dedication, attention, and a bit of luck. A female Scarlet Tanager landing in the juniper was a big plus and a new addition to our cumulative list. We finally heard a Downy Woodpecker, a bird we had never missed on the Big Sit. Both Common Yellowthroat and Red-eyed Vireo responding to spishing and came to the bushes around the platform to see what the racket was all about. We finally managed American Goldfinch when one did its familiar “potato-chip potato-chip” as it flew over. 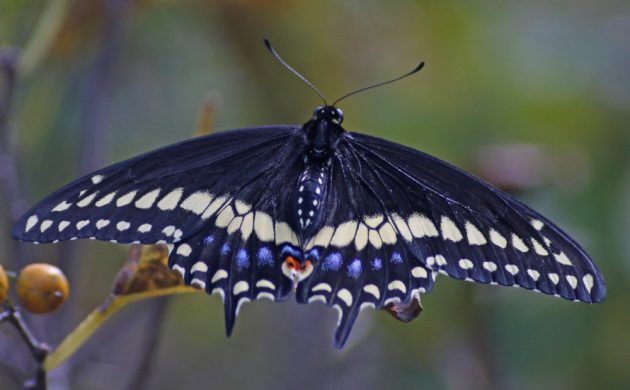 Sometimes our attention wavered from birds like when this Black Swallowtail appeared. We also saw lots of dolphins in the ocean and Humpback Whale blow.

The ocean has almost limitless possibilities so lots of time was spent scanning the deep blue and arguing over birds that were far too distant to be identified. The winds died and shifted around and eventually settled on coming out of the south, weakly. What little migration flight we had experienced died entirely.  Birds would come even more slowly, but we had already topped our second-best number ever and had little hope of getting to our record. 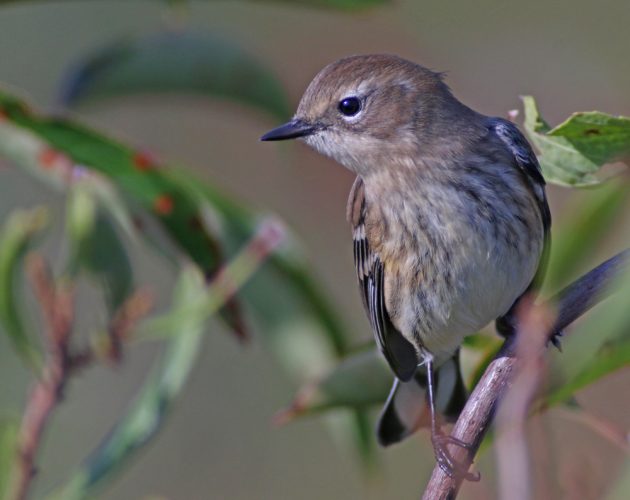 Having Yellow-rumped Warblers around all day is a nice distraction.

Then Matthieu pointed out the Brown Pelican flying by over the ocean and all hell broke loose! I yelled “Brown Pelican” at the top of my lungs to alert the birders who had left the platform and were far below us so they would have a chance to climb back up the many stairs to the top of the platform and see what is a really good bird for New York State, to say nothing of Queens. I got my scope set up at the top of the stairs so they could see the bird as they arrived, huffing and puffing. Everyone managed to see the pelican except for one person (sorry, Donna). Amazingly, our pelican ended up being the first of many seen in and around New York Harbor on the day, as seven were seen from a whale-watching boat and down in Staten Island they tallied double-digits! 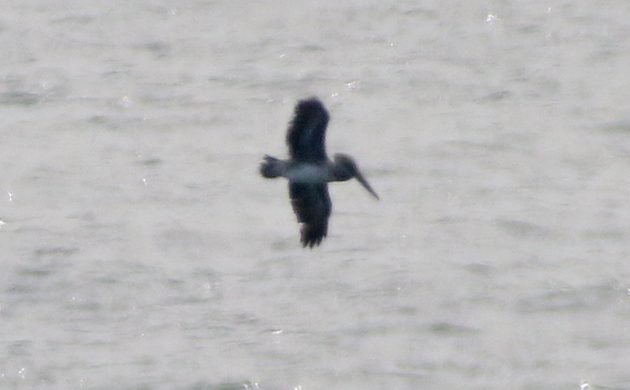 Yeah, it’s a lousy photo but it’s a new bird for me in Queens. Finally!

By the end of the day we had topped out at eighty-two species and were near ready to pack it in. Only me, Matthieu, Steve, and Lisa remained of a crew of birders that, throughout the day, had totaled over twenty. But, wait, what’s that flying in the dusk-heavy sky? A Common Nighthawk! Our seventh addition to the cumulative list and our eighty-third species of the day. We were done. 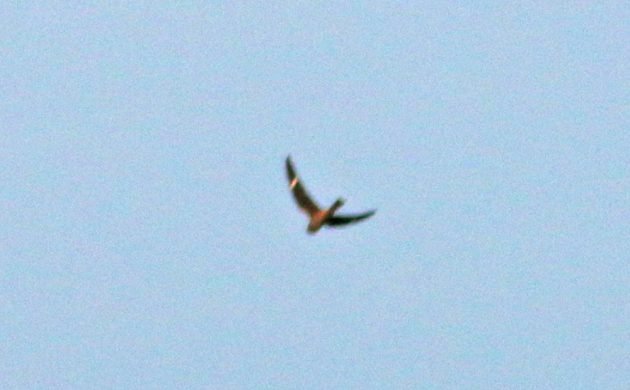 Another lousy photo of a good bird.

Despite the overall excellence of the day we did have some painful misses. Brant are mostly not back yet and we missed that species for only the second time in six years. Chimney Swift is now only on half of our yearly Big Sits, likewise for White-breasted Nuthatch. We didn’t pick up any gulls beyond our four most expected that we never miss (Laughing, Ring-billed, Great Black-backed and Herring). But, considering how weak the winds were and how it isn’t a finch irruption year we did remarkably well, mostly because of the sheer number of birders we had to spot or hear every bird that went past. It was a true team effort and I can’t wait to see if we can do even better on 10 October 2020 when we will be out for the Seventh Annual Queens County Bird Club Big Sit! Our eBird checklist for the day is here. 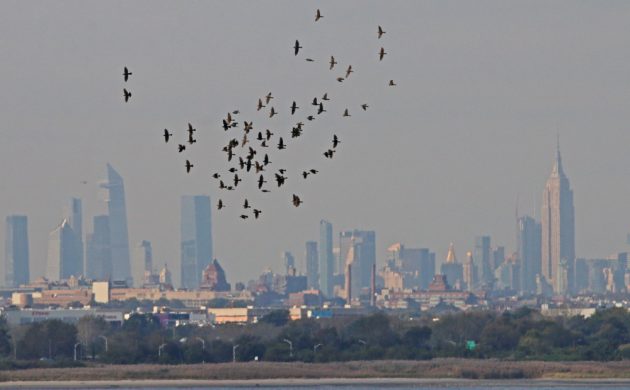 Brown-headed Cowbirds with a nice backdrop.